Three-quarters of acreage desired has been acquired 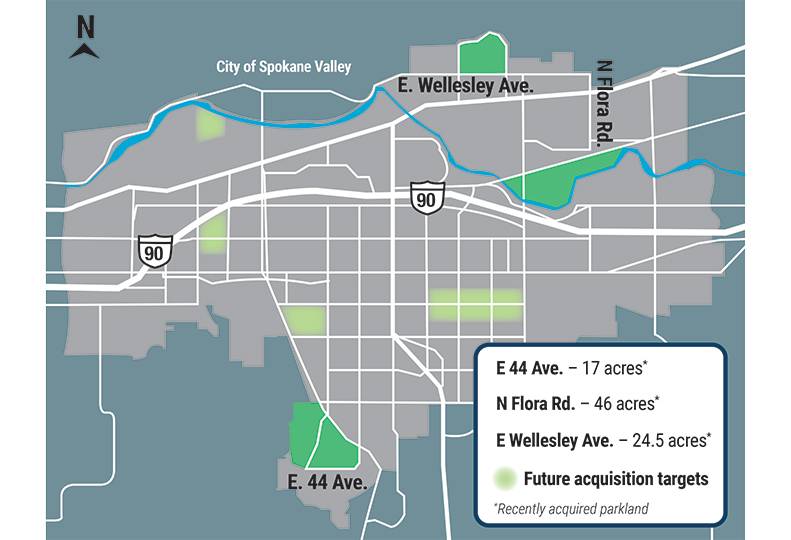 In 2019, Spokane Valley parks and recreation drafted an open space master plan with a needs analysis that identified seven locations in the city underserved with parks.

Since that analysis, the city has either purchased or received donations for a total of 87.5 acres of land, about 75% of its earlier projected parkland needs. The master plan states the city should add 117 acres by 2037 to serve its growing population.

“We are very excited about that because it provides essential future parkland to be developed,” says Bottelli.

The first major acquisition under the plan was made in 2020 with the purchase of 46 acres from Washington state Department of Transportation for $2 million.

Referred to as the Flora property, the land is located along North Flora Road, by the Spokane River, and southeast of the Spokane Business & Industrial Park.

The city received a $1 million grant from Washington state to help pay for the acquisition, adds Bottelli.

In June 2021, the city purchased from the Central Valley School District 17 acres along East 44th Avenue, in the Valley’s Ponderosa neighborhood, for $1.6 million.

“Opportunities come up at different times,” says Bottelli. “When things come up, it’s an opportunity to consider our needs.”

That donation consists of three parcels of land west of Progress Road and north of the Summerfield by Hayden Homes housing development.

Bottelli says that the city hasn’t made plans yet for how to develop the land, and for now, it’s working to maintain it and potentially create public access so residents can walk on it.

Separate from parklands, the city of Spokane Valley received 3.5 acres of land valued at nearly $800,000 from Avista Corp. earlier this year.

The property is made up of three parcels of land that are located east of East Trent Avenue, along the Spokane River.