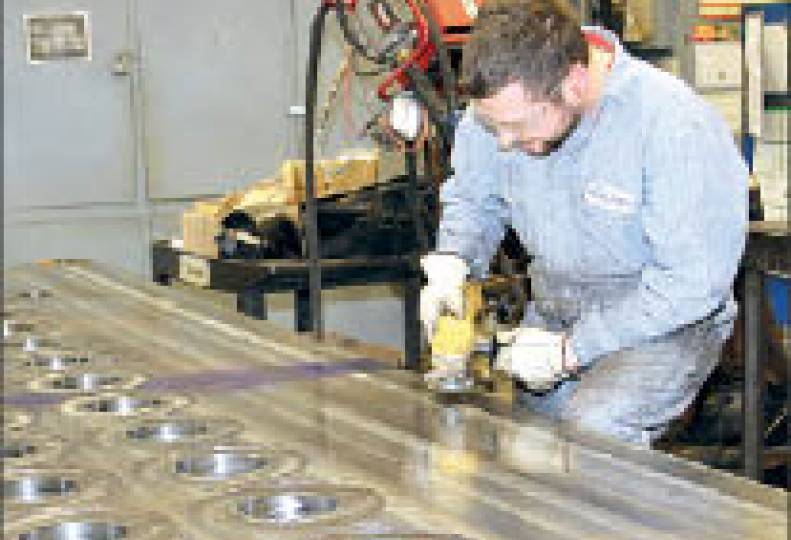 Wagstaff spokeswoman Turina McClelland says construction is progressing on a new, 48,000-square-foot building and on a 9,000-square-foot addition to a manufacturing building at the company's headquarters, located on a 14-acre site at 3910 N. Flora.

After that work is complete, which is expected to occur before the end of this year, the company's headquarters here will total just under 150,000 square feet of space, she says.

Wagstaff company executives decline to disclose the cost of the facilities expansion. The contractor on the project is Spokane-based Vandervert Construction Inc., and the architect is Lindquist Architects PS, of Spokane Valley, McClelland says.

Scott Johnson, general manager of manufacturing for Wagstaff, says the new, stand-alone building being constructed at Wagstaff's headquarters is to be used for production of the manufacturer's largest pieces of core casting equipment. Once those production operations are moved out of the building where they currently are located, he says, the company will reconfigure space to make production and workflow more efficient.

Johnson says the separate large addition to one of Wagstaff's existing manufacturing buildings will create a designated space for inventory, storage, and raw material receiving.

"One main emphasis is to centralize the inventory—we currently have it all over the facilities and it's (going to be) strategically placed to be centrally located within the facilities," he says.

The manufacturing floor expansions at Wagstaff aren't too far behind a big, 32,000-square-foot expansion to the company's offices that was completed about three years ago. McClelland says that expansion should be sufficient for some time.

An ongoing shift occurring during the past decade in the aluminum industry of production moving outside of the U.S. is partly what's prompted Wagstaff's increase in orders—and the need for the expansion, she says.

As a result of that shift, McClelland says 85 percent of the company's equipment now is exported out of the U.S., up from 50 percent 10 years ago.

She says that over the past two years, Wagstaff has secured several multimillion-dollar project contracts to supply aluminum-casting machinery to large, international aluminum producers. Wagstaff currently serves aluminum makers with facilities in 56 countries, she says.

The large majority of recently placed orders for Wagstaff's casting equipment are for production facilities located in the Middle East and in the countries of Brazil, Russia, India, and China, McClelland says.

"The rising cost of energy (in North America) has driven business to exotic locations outside of the U.S.," she says.

The equipment Wagstaff currently is working on here will go to companies that are building new aluminum-production plants, as well as to customers that are expanding existing operations, McClelland adds.

She says the recent increase in demand for Wagstaff's equipment will keep it busy shipping orders well into 2013.

Lee Swartling, company vice president of sales and marketing, says the time it takes for Wagstaff to manufacture all of the equipment needed to fulfill a customer's order depends on the scope of the order, and currently ranges between six months and a year.

"We came into the year with order lead times that were longer than what our customers want, but in the course of five months, those lead times are back to normal," Swartling says.

He says the company's sales fluctuate in cycles depending on the state of the aluminum industry and the metal's raw cost. The market recently has retracted, with the price per-pound of aluminum currently hovering around 90 cents, compared with around $1.10 per pound in March of this year, he says.

"Some years are better than others, and we go up and down with the market, but we have more than doubled our work around here in the past 10 years," Swartling says. "When the global recession hit in 2008, there were things we were working on in production, so that carried us through the dark times..."

He says the company doesn't recognize sales until its orders are completed, so most of those orders placed around the time the recession set in weren't realized for up to a year or more.

Swartling estimates that last year the company's sales increased between 30 percent and 40 percent, compared with much lower sales growth in 2010.

McClelland says the company so far is on pace to meet its sales objectives for 2012.

Wagstaff manufactures the machinery needed to cast molten aluminum into solid ingots, which are long, rectangular slabs, or billets, which are cylindrical in shape. The company also provides the technology to operate its automated equipment and other related services, including the supervision of equipment installations at its customers' facilities.

The equipment Wagstaff specializes in making uses a process called direct-chill casting, which refers to the application of water to cool and solidify the aluminum during the casting process.

Johnson says another main reason the company is expanding its facilities is because the equipment it's making has gotten physically larger in recent years.

Adds McClelland, "Some of the large projects we booked a year and a half to two years ago have caused us to have a lot of product on site, and the machines and parts are taking up a lot of room."

Another factor that influenced Wagstaff's decision to add space, Johnson says, is a need for its Applied Technologies division to have dedicated production space.

Wagstaff Applied Technologies was established in 2001 as a specialty division of the company. It handles custom machining, automation, and mechanical and electrical engineering services that complement its core aluminum-equipment manufacturing.

The Applied Technologies division focuses mostly on projects in North America for nuclear waste management, nuclear power generation, and the hydroelectric sector. Currently, most of the projects for the specialty division are interspersed throughout the company's manufacturing space, Johnson says.

Apart from the order growth and physical expansion at Wagstaff, McClelland and Swartling say the company continually works on research and development projects to improve its equipment and technology to meet industry changes, enhance safety, and stay competitive with other casting-equipment manufacturers.

Swartling says an area of research for Wagstaff's engineers involves developing casting equipment that can handle highly-engineered, specific aluminum alloys that are being used in aerospace manufacturing.

In all, the company employs just under 300 people here, with a total of about 350 people companywide.

In addition to its Spokane Valley operations, Wagstaff has a plant in Hebron, Ky., and a number of employees who are based at 15 international sales and service offices.