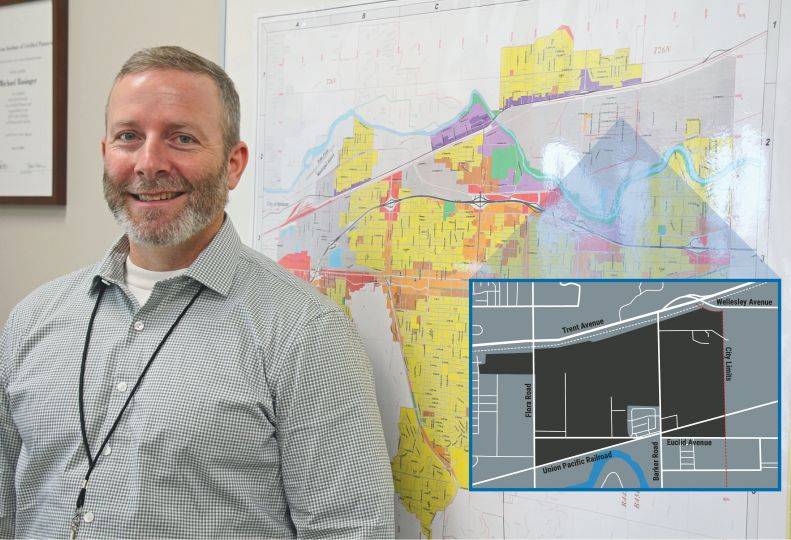 -Natasha Nellis
Mike Basinger, of the city of Spokane Valley, says a new law is designed to take uncertainty out of the permitting process.

The city of Spokane Valley is taking some of the uncertainty out of development on an 840-acre northeast industrial area, near Barker Road and Trent Avenue.

The goal is to save developers time and money by providing them with both a traffic analysis and an environmental review, considered the two most unknown aspects of any development and the most likely variables to kill a project.

Doug Yost, vice president and and director of real estate investments at Centennial Real Estate Investment Co., says, “A lot of times on these properties, you get bogged down by the SEPA (State Environmental Policy Act), which can take six weeks to three months, and traffic analysis studies, all these things that are really unknown so you don’t know the cost to develop the property.”

Land issues and traffic impact fees add expenses to developments, and the two analyses provided through the city’s recently passed planned action ordinance gives developers the knowledge upfront of what costs they can expect.

“The more uncertainty you can take out of developing property or a project, the greater the likelihood that project is going to occur,” says Yost.

The 840-acre area--bounded by Flora Road to the west, Trent Avenue to the north, and the Union Pacific line to the south--currently boasts over 560 acres of undeveloped land zoned for industrial use.

Mike Basinger, economic development manager for the city of Spokane Valley, says the ordinance regarding the industrial area is expected to reduce the amount of time it takes to garner approval for projects in that part of the city by a minimum of six weeks.

“Projects within the northeast industrial area can use that environmental analysis … and essentially that provides them predictability and time savings for those projects,” he says.

A SEPA study identifies and analyzes environmental impacts associated with governmental decisions and helps applicants understand how a proposed project will affect the environment.

Developers still will be required to complete a SEPA checklist, Basinger says, but the process will go much quicker as the city will be able to compare it to its own analysis to ensure the checklist is consistent.

“The whole goal of the planned action ordinance is to expedite our environmental review for future industrial projects,” says Basinger. “I say industrial because it doesn’t qualify unless it’s industrial.”

The city wishes to create an incentive for industrial companies to create high-paying manufacturing jobs that are expected to help support consumerism in the city.

The traffic analysis performed by the city ascertained a fee schedule for developing in the area based on the number of trips taken. Basinger says the fees will be put toward infrastructure and traffic improvements.

One project already slated to occur in that area is the planned new Spokesman-Review printing press operations. The Cowles Co., which owns the Spokesman-Review and the Journal of Business, announced earlier this year that the newspaper’s printing operations will move to a building owned by Centennial Properties on the 19200 block of East Euclid Avenue early next spring.

Yost says Centennial Properties, also a Cowles Co. subsidiary, will build the facility for the press. A grading permit has already been obtained, and the company is getting ready to break ground, he says.

Centennial also has applied for permits for three 60,000-square-foot concrete tilt-up warehouse facilities to be built in the same area, valued at roughly $12 million. Baker Construction & Development Inc., of Spokane, is listed as the contractor. The permits are currently under review by the city of Spokane Valley.

It found that development could support 9,800 jobs statewide and would create 3,300 manufacturing or industrial jobs in the Spokane area.

The city of Spokane Valley identified the area as a priority development area while updating its comprehensive plan in 2016 and has since made efforts to fast-track infrastructure improvements and the construction permitting process.

Part of that includes a $114,000 grant from the Washington state Department of Commerce in 2016 to conduct the supplemental environmental analysis.

Basinger says the area is considered to be a prime spot for industrial development as it’s flanked by two railroad lines--which recently had spurs installed to allow for train deliveries.

Interstate 90 and Interstate 290, more commonly known as Trent Avenue, also are located near the area making the location easily accessible.

Progress Rail, a subsidiary of Peoria, Ill.-based Caterpillar Inc. also purchased 39 acres of land on the east side of Barker Road in 2017. The company hasn’t begun development, but Basinger says the land purchase sparked other developments, such as the creation of a Union Pacific spur in the area and the Katerra facility.

The Journal previously reported that while representatives of recruiting efforts here declined to confirm any plans for Progress Rail, grant documents submitted to the state say 40 acres are being considered for a $15.8 million manufacturing facility expected to have about 150 employees, with roughly 225,000 square feet of production and storage space.

Basinger says Spokane Valley will continue to extend infrastructure to the area this summer as part of the city’s capital improvement plan.

The city worked with the county to extend sewer up Flora Road to Barker Road, and Euclid Avenue was paved over it.

“Our agreement with the county was that we would pave on top of the sewer pipe,” Basinger says. “We put a new road in all the way from Flora to Barker … which has been instrumental in attracting some industries.”

Basinger says the city’s partnerships with the county’s environmental service department and the water districts, as well as Centennial Properties, were invaluable to extending the necessary infrastructure to the industrial area.

Projects planned this year include extending sewer from Euclid Avenue past Garland Lane to a site where PODS Enterprises LLC, a portable storage and moving company, has expressed interest in developing a storage facility, says Basinger, so the organization can hook up to sewer immediately and not have to install a temporary--and costly--septic system.

Infrastructure also will be installed from Barker Road to Flora Road. Garland Lane, which was built by Katerra to provide access to its new facility, will be extended. Basinger anticipates that the city of Spokane Valley will work with Katerra to finish the road.

The sewer pipes running beneath Garland also will provide sewer-service access to the roughly 152 acres owned by Centennial Properties.

Basinger says the infrastructure, which is being constructed in partnership with Centennial Properties, the county, and the water district, will allow Centennial to develop the area.