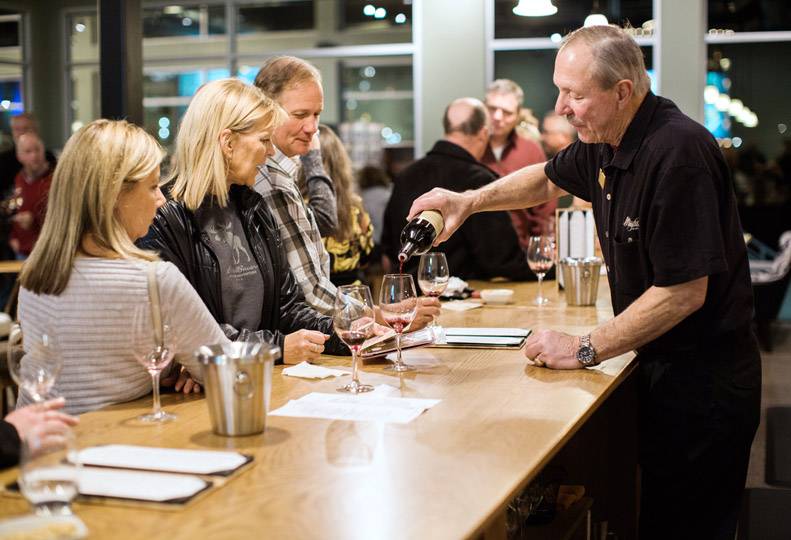 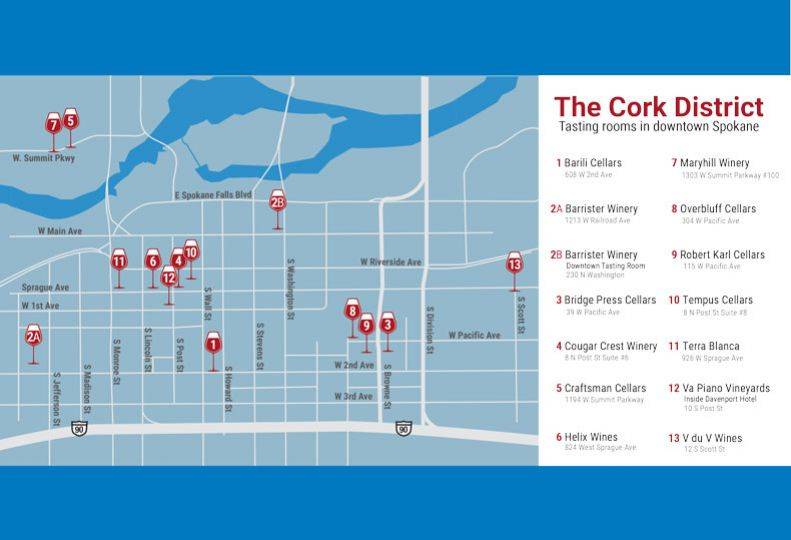 Spokane is beginning to earn a reputation as a destination for quality wine and wine-tasting events, industry experts say.

Those join longtime downtown wine tasting rooms, including Cougar Crest Winery, Barrister Winery, and Robert Karl Cellars. In all, at least 20 wineries and wine-tasting rooms operate in the Spokane area.

Terra Blanca is a Benton City, Wash.-based wine producer, while Tempus Cellars, Helix, and Va Piano are all satellite locations of wineries based in Walla Walla.

Michael Allen, executive director of the Cork District, a Spokane-based organization that markets the city as a destination for wine tourism, attributes most of that growth to recent changes in Washington’s liquor laws, which allow winemakers the ability to open up four tasting rooms outside of their main winery locations. The changes also included allowing tasting rooms to sell wine by the glass, growler, or keg.

“With those changes, we’ve seen more outside wineries…that are interested in opening tasting room locations in Spokane,” he says.

Craig Leuthold, who owns Maryhill with his wife and fellow Spokane native, Vicki, says the couple saw an opportunity to expand their market to Spokane while attending a holiday dinner in Kendall Yards.

“We were home for the holidays in 2016, and while out to dinner with friends we noticed signs for construction of a new building,” he says. “That was Friday night, and on Monday morning, I was in the Kendall Yards real estate office discussing locating a tasting room there.”

Maryhill is one of Washington state’s largest wineries, producing more than 80,000 cases a year.

Leuthold says the biggest difference between Spokane and wine destinations like Walla Walla or Goldendale, is that there are almost no grapes grown here.

“Almost all of the wineries in the central and southern part of the state produce their wines where they sell them, like we do at our facility in Goldendale,” he says. “There are almost no grapes grown in Spokane because the winters are too cold, and the growing season is just too short to get them ripe.”

Leuthold says this has contributed to the increase of satellite tasting rooms, a phenomenon he says will make Spokane into a destination wine location for tourists over time.

“When we started Maryhill, there were only 125 wineries in the state, and now there over 900. I’m not sure of the actual numbers, but I believe there were less than five in Spokane at that time,” he says. “Now, like all of Washington, the tasting-room scene here has exploded.”

Leuthold says he believes that the Spokane wine industry will continue to grow as the status of Washington wines continues to rise.

“I truly feel that Washington is producing some of the finest wines in the world, and that is because we have the perfect climate and growing conditions for growing world-class grapes,” he says. “That’s where it starts. “People will be looking for places to come and try those wines.”

Maryhill is now a member of the Cork District and also participates in most of the wine related events that take place in Spokane, including Vintage Spokane, a wine and food event held here in July.

Allen says of the Cork District, “Since we started in 2015, our goal has been to attract more wine tourism to Spokane.”

The Cork District partners with organizations such as Visit Spokane, the Spokane International Airport, Alaska Airlines, local wineries, tasting rooms, hotels, and restaurants to promote wine tourism in Spokane and the surrounding areas.

Allen says he came up with the idea for the Cork District several years ago, while he was serving on the Spokane City Council.

“Wineries and tasting rooms have been in this area a long time,” he says. “But to me, it seemed like we had a unique opportunity to try to promote Spokane as a wine destination.”

“We’re gaining some recognition, but overall, we’re still working to build advertising and expose people to the wealth of tasting experiences that are possible here,” he says.

“Spokane is unique in that we have both urban tasting rooms, close to downtown hotels and entertainment, as well as more rural wineries that capture those who prefer a more traditional tasting experience.”

“We started out with about 15 tasting rooms, but some have left, and others have come in,” says Allen. “But I’d say 95 percent of tasting rooms here in town are now part of the Cork District.”

“A lot of our tasting rooms downtown are within walking distance of one another, which helps contribute to our success,” he says.

Because Spokane is too high in elevation to be within a wine grape-growing region, known as an American Viticultural Area, all of the wineries here source their grapes from vineyards in Walla Walla or the Columbia Basin.

He says five of the Cork District’s tasting rooms are satellite locations for wineries based elsewhere, but the bulk of them are producing their wines in Spokane.

“The locally based wineries bring their grapes here to Spokane and make their wine here,” he says. “In fact, in the fall, many of them open their tasting rooms when they are crushing so folks can come and watch.”

Spokane business owner Josh Wade says his familiarity with the region’s wine scene began in 2009, when he started a blog called Nectar Wine.

“I got to know a lot about wine and the region’s wineries, and eventually talked five of them into opening a joint tasting-room space downtown,” he says.

At that time, wineries were only allowed two satellite tasting room locations, so it made financial sense to share rent and staffing expenses for a single location, Wade says

“Wine is a big investment on its own,” he says. “When you consider a typical tasting room only sees 10 to 15 visitors daily, it made more sense to operate a shared space.”

Nectar Tasting Room opened in 2011 and soon grew to include catering and event services.

“Once we became known as an event venue and I added a catering service, we closed the tasting room and reopened as Nectar Catering & Events,” he says.

He says Nectar’s downtown location at 120 N. Stevens still sells only Washington wines and also features special selections from one winery each month.

“As a tasting room, we used to do events with the Cork District,” he says. “Since our locations now also serve beer, we don’t technically qualify for inclusion anymore, although we’d love to continue to be involved.”

Wade says the biggest changes to Spokane’s wine scene in the years since he started his businesses have been increased emphasis on destination tourism, and the added presence of large high-profile wineries, two factors he says will contribute to  Spokane’s popularity as a wine-tasting destination.

“Mike and the Cork District have done a lot to promote wine events, and make wine tasting an anticipated activity for visitors,” he says. “We’ve also seen some larger well-known wineries … move in, which helps attract more people and signals other brands that this market is vibrant and active.”

“The Cork District works with the Spokane International Airport to survey travelers, and over the years we’ve seen about a 5 percent increase in the number of travelers who listed visiting a tasting room as part of their travel plans in Spokane.”

Last month, Spokane became the ninth city in Washington to be added to an Alaska Airlines program called Wine Flies Free, which allows mileage plan members to bring home a case of wine with no added baggage fee. The program, which was launched in 2007, now includes 29 cities in the Western U.S.

Allen says the Cork District hosts two major events each year, a Holiday Wine Festival one week prior to Thanksgiving, and the Spring Release event, May 11-13.

“During Spring Release, our tasting rooms are open from noon to 5 and feature new wines alongside food and chocolate pairings,” he says. “Most tasting rooms also showcase some kind of local art or musical
entertainment.”

Looking ahead, Allen says the Cork District hopes to add a third large event to its lineup, in the form of a tasting competition.

“We don’t have all the details worked out yet, but we’d like to put something together for 2019,” he says.