Spokane’s event, tourism year to be its busiest ever

Multiple years of events canceled by pandemic have returned this year 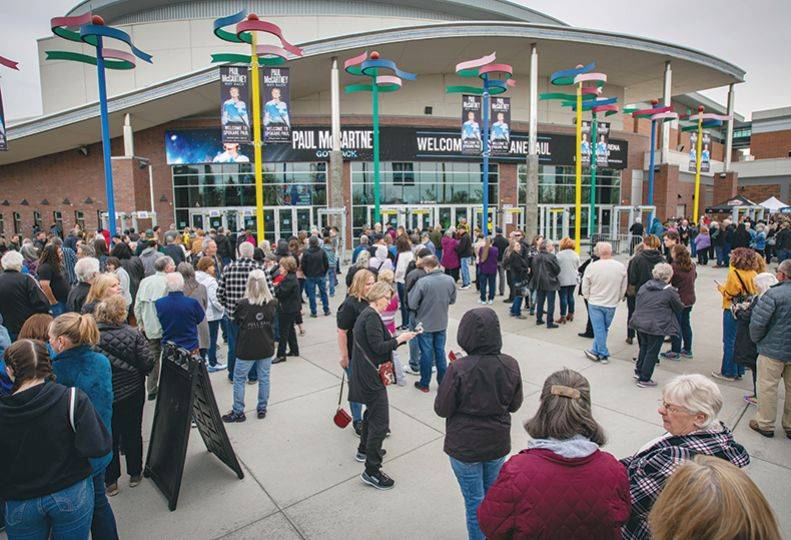 Pent-up demand for conventions, sports, entertainment, and travel over the past few years has led to a jam-packed season of events in the second half of 2022, says Stephanie Curran, CEO, Spokane Public Facilities District.

During the two-year period in which the Public Facilities District was forced to shut down due to the pandemic, Curran says, most events were rescheduled—some as many as four times—as venues waited for the opportunity to reopen. She adds that there were only about five cancellations in which groups decided to take their business to other states that were open, regardless of the pandemic.

“What happened was, we rebooked all this business four times, and it all landed in 2022,” she says.

Conventions, which can be slower to return because they tend to book out years in advance, also have made a big return. The Spokane Convention Center is in a situation where it has conventions back-to-back all summer, she adds.

Michelle McIntyre, executive assistant to Curran who handles VIP guest services, says that at the Convention Center alone, there are over 90 multi-day events this year and over 80 single-day events.

Some of those events shine a national spotlight on Spokane. Just last month, the Spokane Convention Center and the Davenport Grand hotel hosted the Public Relations Society of America Travel & Tourism conference for the first time.

The conference had 245 attendees and an economic impact of $252,000, says Kate Hudson, public relations manager for Visit Spokane.

As earlier reported by the Journal, regardless of the comparatively small size of the conference, the publicity that is expected to be produced by the group of travel writers in attendance has the potential to bring new tourism dollars.

The exposure from the conference will begin with two upcoming articles, one from National Geographic Magazine and another in Passport Magazine, and Hudson says more will be published over the next year.

Meg Winchester, president & CEO of Visit Spokane, says several writers commented that they had no idea Spokane is such a great destination.

In addition, Winchester believes that the revenue from conventions, leisure, and sports are trending higher this year than in 2019, which was a peak year for Spokane.

In 2019, revenue from lodging alone, which does not include food and beverage, retail shopping, and other leisure activities, was $275.4 million, according to a report by Philadelphia, Pennsylvania-based company Tourism Economics, Inc. In 2020, it dropped to $180.2 million.

For 2021, Tourism Economics reported $301.9 million in revenue from lodging alone.

Winchester credits this rise in part to Visit Spokane’s marketing efforts in 2020 to surrounding areas within drivable distances when travel by airplane was restricted or limited.

Curran says the generally accepted industry guideline for measuring economic impact is that every marketing dollar spent results in a $7 return.

“It was so hard being shut down for so long and all that money not coming into the community,” says Curran.

Other events that put Spokane in the spotlight include this year’s concerts which were kicked off by Paul McCartney at Spokane Veterans Memorial Arena, in April, and Bob Dylan at the First Interstate Center for the Arts, in May.

“When the two greatest songwriters of all time choose Spokane to start their tours, that’s pretty big,” Curran claims.

Matt Meyer, director of entertainment for Spokane Public Facilities District says, “It’s shaping out to be an incredibly good year for us and Spokane.”

The Podium, an indoor track facility, will be taking on midsize concerts and hosting high school graduations, which had previously been held in Spokane Arena, reducing opportunities of booking other entertainment during that period. Meyer says that by moving the high school graduations to the Podium, he was able to book Kevin Gates & Friends for Friday, June 10, at the Arena, and ZZ Top, on June 9, at the First Interstate Center for the Arts.

“Having the flexibility in buildings, and being able to move things around, allows us to bring more entertainment in the long run,” he explains.

Paul Christiansen, director of sports for Spokane Public Facilities District, says the Podium will begin hosting concerts starting in October after summer-long renovations to protect the indoor track and some acoustic improvements are complete. The venue is expected to hold the “sweet spot” of 3,000 to 5,000 attendees, he says.

Northern Quest Resort & Casino is billing its summer concert lineup as its largest to date. Its outdoor venue, which holds just over 5,000 people is hosting nearly 20 concerts from June to September with performances from well-known musicians across several genres, including Flo Rida & T.I. to The Avett Brothers and The Goo Goo Dolls.

Sporting events also are set to have a strong year with the return of events like Bloomsday and Hoopfest, says Winchester. At the end of June, the 2022 USA Karate National Championships will be the first major karate competition to be hosted by Spokane and is expected to bring 2,000 of the country’s top karate athletes here for a four-day event.

The council, which goes by the French acronym CISM, was founded in 1948 and is an international sports organization devoted to bringing together armed forces personnel from all nations for sports activities. The mission of the organization is to encourage friendship, respect, and peace.

Kirschman explains that service members from participating nations will share meals and other activities in addition to playing soccer.

“The idea is it’s better to meet one another in person and build friendship,” he says. “It prevents us from meeting in the battlefield.”