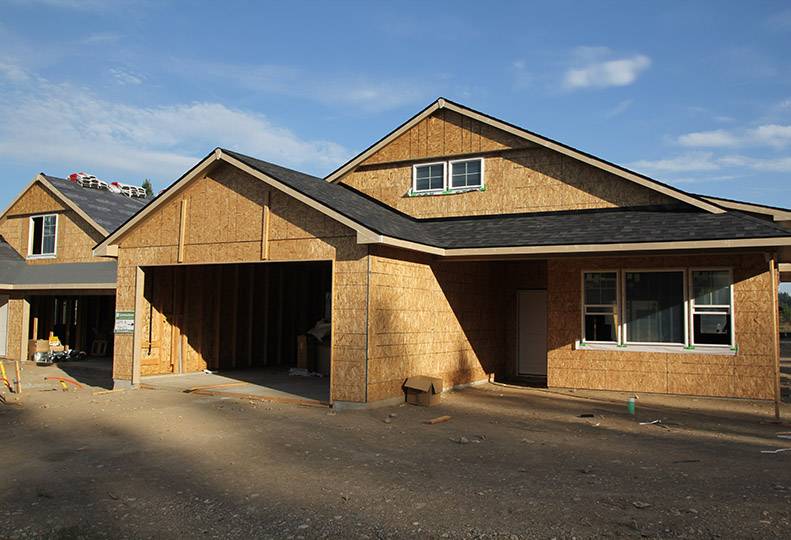 -—Staff photo by Mike McLean
This Greenstone Homes house at Wandermere Heights is one of several under construction there.

The market for newly constructed homes is staging a welcome comeback, sources in the homebuilding industry say.

The city of Spokane issued 96 building permits for single-family homes in the first five months of 2013, up 43 percent from a year-earlier period, and the highest in five years, says Julie Happy, spokeswoman for the city.

Unincorporated Spokane County outpaced that growth with 243 homes permitted in the first five months of the year, up a hefty 72 percent from the year-earlier period.

Corey Condron, president of prominent Spokane homebuilder Condron Homes LLC, says the company is building more than twice as many homes this year as it did in 2012.

"It looks like we're going to top off around 50 homes this year; 20 are under construction now," Condron says.

Jim Frank, CEO of Liberty Lake-based real estate development company Greenstone Corp., says sales have been improving in Spokane and Kootenai counties over the last 12 to 18 months, although they aren't back to prerecession peak levels of 2004 and 2005.

Frank estimates Greenstone's sales will be up 30 percent in 2013, and the company likely will build well over 200 single-family homes in the Spokane and Coeur d'Alene areas this year.

"The fundamentals of the housing market are extremely strong," he says.

With prices starting to climb back out of the bottom, and interest rates edging upward, it's creating a sense of urgency for people who've been holding off making home-buying decisions, he says.

Frank says the company is seeing strong sales in the Ponderosa Ridge development northwest of Spokane, and in Coeur d'Alene Place, across the state line.

"The housing market in North Idaho is definitely improving," he says. "It's gone a lot of years with a lack of new construction."

During that time, though, new home inventories dropped while the population continued to grow.

"It's going to create a situation where there's stronger demand than inventory," he says.

Greenstone plans to announce this fall the next phase of home construction in Kendall Yards urban village northwest of downtown, which will include homes ranging in price from $160,000 to more than $500,000, Frank says.

After a lull in developers building homes on speculation, that market segment is returning, Frank says.

Lately it's been easier for Greenstone to sell a spec home than to pre-sell a custom home, he says.

"Everybody has a bit more spec inventory," he says. "It's a good market for people who want to make a quick decision before interest rates go up."

Condron Homes has tweaked its business model to focus on gated communities within its price range, such as Wandermere Heights, north of Spokane, and Granite Hill, in Spokane Valley, Condron says.

Still, not many customers in that range are first-time buyers, Condron says.

"Empty nesters and retired homebuyers make up the majority of my business," he says. "I think that has a lot to do with the market being active."

Condron says the existing home sales have recovered to the point that homeowners looking to move into new homes are more comfortable that they can sell their current homes in a timely fashion with the value they want.

"Most of these folks don't have a mortgage on their existing homes," he says. "They've been able to wait out the six-year recession to get to this point."

The existing-home market also is coming back to life.

The Spokane Association of Realtors reports that 1,971 homes were sold in the first five months of the year through its Multiple Listing Service, up 24 percent from a year earlier. Of those, 290 were new homes, a 70 percent increase over with the year-earlier period.

The median sales price for all homes sold through the MLS through the first five months of the year was $161,000, up 5.9 percent from the year-earlier period.

New home values also are on the rise.

The average valuation of homes permitted in unincorporated Spokane County this year through May was $387,800, up 19 percent from a year earlier, while the permit valuation for new single-family homes in the city of Spokane was $279,300, an increase of 6.6 percent compared with the year-earlier period.

Condron noted that comparatively few lots have been created since the recession, and that could be playing a role in the differences in permit trends in the city and county jurisdictions.

"I would imagine some lots in the city are infill kind of lots that are inherently at lower price points," he says.

"If you're going to build on a 5-acre tract, it's probably going to be in the unincorporated county," he says.

"Low interest rates have increased buying power," he says. "People who decide to come back into the market can afford more house now than three or four years ago."

"Interest rates are no longer on the bottom, but they are still incredibly affordable," he says. "I think we're going to see a gradual increase in the next 24 to 48 months to the 6 to 7 percent range."

Condron says he expects new home sales to stay steady through the year.

"There are still people buying now," he says. "Usually sales go flat during the summer, but being a week after school gets out and still having customers come through the door is a good sign."

The pool of potential customers who've contacted the builder is strong, too, he says, adding, "That translates into future customers."