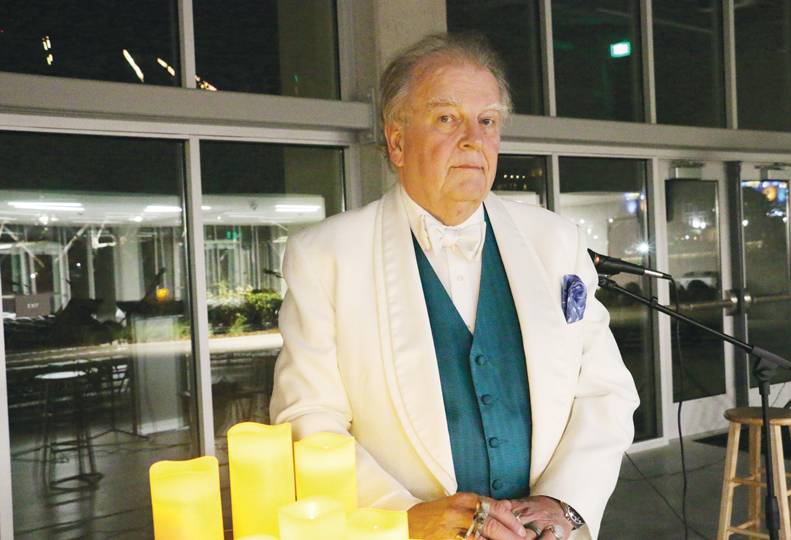 -—Natasha Nellis
Chet Caskey is a former trial lawyer who spent his much of his career in New Orleans before moving to Spokane in the mid-2000s.

Chet Caskey is hard to miss.

When he arrives at the Journal’s office on a Monday afternoon, he is dressed in a dark gray tuxedo with bright turquoise vest and matching shoes, an array of flashy rings glittering on his fingers.

Caskey readily admits he has a flair for the dramatic — a disposition that he uses to restore a kind of life to the dead in the form of ghost tours conducted through his business, Two Dog City Tours.

Caskey grew up in the Ozark Mountains of rural Missouri, in a part of the state so remote that it received one weak television signal and, at night only, two radio station signals. The isolation meant that Caskey’s family often had to keep each other entertained, which they did through storytelling.

Caskey became a trial lawyer and practiced for more than 30 years, primarily in New Orleans. He also taught law there at Tulane University for 20 years.

After Caskey and his wife Cathy retired and moved to Spokane in 2006, he became a historian for Fairmount Memorial Association and began leading tours of Spokane’s cemeteries.

He received so many requests for tales of Spokane’s spooky side that he decided to research thoroughly the city’s ghosts and put together a ghost tour.

In the decade since, Caskey has written four books about Spokane’s ghosts, creepy places, true crime, and other dark topics while continuing the ghost tours. He’s brought more theatrics into the ghost tours, with scripts and period costumes. He and his wife have a costume shop in their basement that contains almost 100 vintage hats.

“I guess I’m the only guy in Spokane who has 10 tuxedos, all from different periods and in different styles and colors,” Caskey chuckles.

Two Dog City Tours is named for Caskey’s two Pomeranian-Pekingese dogs, Joey and Lillie, who have become “ghost dogs” in the years since the business was established.

Two Dog City Tours offers two-hour walking tours, as well as two-hour bus tours through Inland Empire Tours. In addition to Caskey and his wife, four people work for the tour company on contract. Caskey estimates that some 900 people attend about 100 tours each year, and 40% of the tour’s attendees are from out of town.

He conducts walking tours nearly year-round, except for the heat of August and when Spokane’s icy winters prove too hazardous. Tickets are $15 and are sold through the City of Spokane’s Parks and Recreation Department, as well as on Inland Empire Tours’ website. The walking tours are wheelchair accessible.

Caskey says what he most enjoys about the tours is the close physical proximity between him and his audience.

“It’s 100% street theater,” he says. “What I love in street theater is that people are right there — they’re 10 feet away from you. There’s sometimes dialogue and questions and laughter. It’s just really upfront and personal. They learn a lot about Spokane history and are entertained in the process.”

Walking tours stick to a five-block radius from their starting point — which Caskey says provides plenty of opportunities to visit sites said to be haunted by various spirits.

One such site in downtown Spokane is the Pearl on Adams Apartments, located at the northeast corner of Adams and Second Avenue. Formerly the Helena Apartments, the building was the site of the murder of Kelly Conway in 1998 by the building’s apartment manager and custodian, Stanley Pietrzak.

Some residents say they sometimes smell foul odors that don’t seem to have a source, and some say they hear phantom screams. They’re most bothered, Caskey contends, by poltergeist activity.

He claims some residents have reported being physically grabbed or shoved by unseen entities. Many residents protect their living space with a hex sign called a tetragrammaton, a symbol that they believe keeps the poltergeist from entering their apartment, drawn or painted on their apartment doors. Caskey says the coach driver for Inland Empire Tours refuses to go near the building due to previous unsettling experiences.

Caskey says he’s not sure why so many people are fascinated by ghosts.

“I think it’s within us to have a spiritual aspect,” Caskey says. “We want to — and sometimes we have to — believe in ghosts and spirits and things of that nature.”

Caskey refers to the work of anthropologist Pascal Boyer, who speculates that humans may be hardwired to believe in ghosts and other supernatural phenomena.

“In some sense, ghost tours become morality plays, very much like the morality plays of the Middle Ages,” he says. “In Spokane ghost stories, sometimes the villains prevail, but in the long run, they don’t. They leave a terrible, unhappy ghost.”

Caskey says much of the success of Two Dog City Tours stems from the fact that it’s a business to keep him and his wife occupied in retirement, rather than a money-making venture.

“We weren’t relying specifically on any of the income from the ghost tour business. We kept overhead down by just being patient and not desperately relying on the bottom line,” Caskey says. “It’s a business model for retired people who want to have fun in business.”

Caskey adds, “I can’t tell you how many people have tried ghost story tours and failed in the Northwest region because they’ve got to be a success or they’re going to starve. In some businesses that might be good, but in these cottage industries, it’s not.”