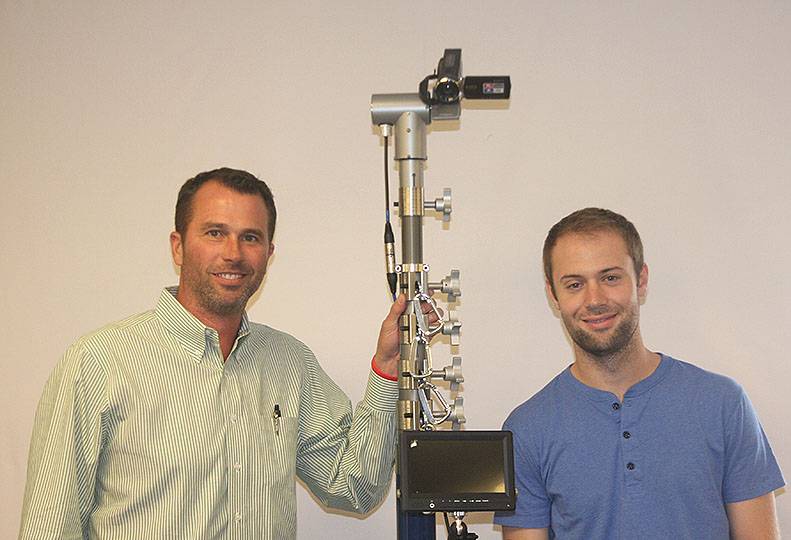 -—Staff photo by Katie Ross
Sport Scope co-founders Andy Barrett, left, and Derek Taylor started the company in early 2012 and have sold its product to customers in 48 states and Canada.

Spokane startup Sport Scope Inc. has marked a 50 percent revenue growth this year, its second year of business, says general manager and co-owner Derek Taylor. The company, which manufactures specialty pole-mounted end-zone cameras for sporting events, is expecting to hit close to $2 million in sales for the year.

Launched in early 2012, Sport Scope is the brainchild of Inov8, an umbrella company here made up of a board of local business professionals who target niche markets for manufacturing companies to develop new products.

The Inov8 team is made up of Andy Barrett, Inov8 managing partner and co-owner of Sport Scope, and partners Don Myers, Tom Simpson, and Mike Wollan. Barrett also is executive director of longtime, respected Spokane manufacturing company Berg Cos. Myers is president of Berg, Wollan is the chief operations officer, and Simpson is the president of the Spokane Angel Alliance and a Berg board member.

Inov8's goal, Barrett says, is to develop one new business a year for the next eight years. Sport Scope was its first venture. Inov8 partnered with Taylor to launch the project.

"The first step was to bring Derek in to run day-to-day operations, with Inov8 acting as a board of directors," says Barrett.

Taylor, who graduated with a degree in finance from the University of Idaho, met Barrett through a family friend in 2011.

Barrett says that when Inov8 seeds a company, it's a "bootstrap situation." Taylor was the only employee dedicated completely to Sport Scope when it first launched. Now, between assembly and subcontractors, Barrett says the company has about 10 employees. It occupies a 1,500-square-foot suite in the Berg Cos. building at 18001 E. Euclid in Spokane Valley.

The Sport Scope is an end-zone video camera and viewing screen mounted on an extendable pole that can reach from 6 feet to 30 feet high. The 42-pound device is constructed of mostly of steel and aluminum, and features a base with four locking legs for stability and wheels for transportation.

The Sport Scope comes with all the necessary parts, including the Sony camera and viewing screen, rain gear, a level, travel bag, remote-control device, and a chair, and sells for $4,999 plus shipping. It can be used for capturing game or practice footage, which coaches and players then can watch and analyze. According to Taylor, 90 percent of Sport Scope's business comes from high school football teams, and 5 percent comes from college football teams.

Sport Scope does all the assembly for its products in-house, while the parts are shipped in from various vendors.

Barrett got the idea for Sport Scope after he was asked by a local sports coach to help fundraise for an end-zone camera.

"I found that what was available at the time was expensive and could use some more engineering," Barrett says. "At the same time I had already met Derek, and we decided to bring in some engineers and make a business model that was less expensive and had a stronger marketing push."

Taylor spent the last three months of 2011 developing the Sport Scope business plan and testing products. The company launched in January 2012 and spent much of that first month conducting marketing campaigns, Barrett says.

"The industry at the time was not very savvy to online marketing," he says. "We felt it was a very vulnerable market."

Sport Scope sent out email blasts that it then could track with analytics. Taylor says the company then would follow up on those who viewed the message multiple times. He says email blasts were sent to certain schools in each state based on enrollment levels.

Sport Scope also used AdWords, a Google advertising product, to attract customers through that search engine. The company will run promotions occasionally, such as including a free handheld coaches' pole with every Sport Scope purchase, as it did in May of this year.

"Most of what we sell is outside our local area," says Taylor. "We've sold to 48 states and Canada. Many of our competitors focus on only their local area, but we're Internet based. This makes it easier for customers everywhere to choose and order product, and helped us gain market share quickly."

Taylor and Barrett also believe that their lower price helped launch Sport Scope into its successful debut. At the time of Sport Scope's launch, Barrett says, similar products were retailing for around $8,000.

"Prices in the industry were inflated," he says. "Those prices have dropped now, but we are still competitive."

Taylor also says that Sport Scope doesn't over-stock the parts for making the scope, which allows them more flexibility in manufacturing.

"We don't sit on a huge warehouse full of parts," Taylor says. "Our pieces go out faster, and we don't tie up our cash in inventory."

He says Sport Scope's low-volume practices give the company more opportunities for customization. One modification Sport Scope offers is the ability to paint the scope so that it can match the school's or team's primary color. The company offers this at no extra charge. Not overstocking also allows Sport Scope to catch and fix design flaws faster, Taylor says.

For the future, Taylor says Sport Scope wants to expand into more tower-based pieces, such as lighting and security products. Already Sport Scope is offering an 11-foot camera pole and a range of accessories. It will soon also have 16- and 20-foot pole versions available. These smaller versions of the Sport Scope are ideal for filming practices, Barrett claims.

He says he hopes that Sport Scope next year can reach $3 million in sales. But while Sport Scope looks to the future, it is always looking for ways to improve its core product.

"We not only want to grow, but also fine-tune what we have," Taylor says.

Sport Scope donates 5 percent of its net income every quarter to the Special Olympics program. It also provides several links on its website that enables users to donate to the cause.

"We're selling something into the sports industry, and we want to give back to that," Barrett says.