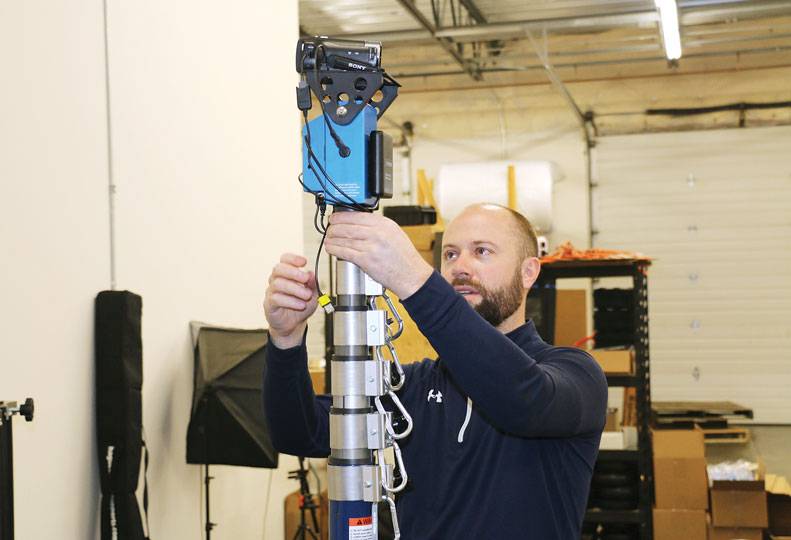 When high school football is responsible for 95% of your annual sales revenue and a global pandemic halts play across most of the U.S., what do you do?

Launch a new project to generate revenue, despite limits and restrictions under which games are allowed to resume, of course.

That’s just what the owners and employees of Spokane Valley-based Sport Scope Inc. did in the midst of plummeting revenues.

“We decided to push up the livestreaming project to April of last year,” he says. “We knew that fans wouldn’t be able to come to games once they resumed.”

The Sport Scope is a video camera and viewing screen mounted on an extendable pole with a range of 6-feet to 30-feet high. With a weight of a little more than 40 pounds, the device is constructed of mostly steel and aluminum and features a base with four locking legs and wheels for transportation.

The idea of livestreaming high school sports is hardly new to the marketplace. For instance, the National Federation of State High School Associations is one of the more prominent companies in the U.S. that streams events. The NFHS Network LLC is a part of the CBS Sports Digital Network, according to the NFHS website.

“There are some big competitors in that space,” Taylor says. “But the way that they do it isn’t very advantageous to the schools themselves.”

Taylor contends the dominant U.S. model for livestreaming high school sports has been to provide the schools with video equipment at no charge. In exchange, the individual schools enter into multiple-year contracts that tend not to generate much money for the schools.

Sport Scope built a software platform that users can now stream. With the Sport Scope Live application, iOS users can download the app on iPad and iPhone, pay for the game they want to watch, and the school hosting the video event splits the proceeds with Sport Scope.

Streaming on some Android phones may be available in the future, he says.

And it’s not exclusive to football. Coaches, parents, and organizers in other sports, more specifically gymnastics in recent weeks, have been a source of revenue for Sport Scope, he says.

At press time for the Journal, Sport Scope was hosting a four-day gymnastics tournament in Pennsylvania that was expected to generate $20,000 in revenue for the host school and Sport Scope.

“It’s been really successful for us, and that’s what we’re going to be pushing moving forward,” he says. “It has turned into a fundraising mechanism for a lot of our customers.”

Launching the software helped the company recover from a steep drop in sales of the $5,000 Sport Scope hardware in 2020. The scope comes with all the necessary parts, including the Sony camera and viewing screen, level, rain gear, travel bag, remote-control device, and chair.

Though Taylor declines to disclose annual revenue figures, he claims that prior to the pandemic, the company had seen year-over-year revenue increases average between 20% and 25% since he and Barrett founded the company in 2012.

In early 2020, sales for the company’s specialized cameras were higher than ever, he says.

For three weeks, and for the first time in Sports Scope’s history, the company generated “zero orders,” Taylor says.

“That was a shock,” he says. “Even when we launched the company, I think I sold our first system within the first week.”

Taylor says the company furloughed several employees during the second quarter, and many were able to stay afloat financially with the help of enhanced unemployment benefits.

“I kept our overhead low as orders began to trickle through again,” he says.

The summer months into the third quarter has traditionally been the busiest time of the year, he says.

“We mostly sell out of state anyway,” says Taylor. “Things started opening up a little bit in certain states, so there was some football being played.”

Still, it wasn’t enough to make up for lost revenue, he says.

“Our revenues were depressed the whole year,” Taylor says. “We were down about 30% last year, but it definitely could’ve been a lot worse.”

The 30% drop equates to a break-even year for the company, according to Taylor.

He says the company perpetually explores new ways to bring fresh approaches for sports viewership to fans and coaches.

Sports Scope came up with other innovations before developing the livestreaming platform.

In 2016, the company developed instant-replay video for coaches during live game action. Only the coaches see the instant replay for now; however, Taylor says plans are underway to allow the live stream camera operator to send instant replays to fans at home.

“The coaches can get video from their iPad as it’s recorded just a few seconds after the play is done,” says Taylor.

In 2018, the company combined instant-replay functionality with its original end-zone camera to create a more seamless experience, Taylor says.

“It reduces your film staff, and you can control it all from an iPad,” he says.

Now a single videographer can sit in the press box and control the angle of the camera on the field, he says.

Moving forward through this year and next, Sports Scope will emphasize streamlining user operations internally and externally.

“Now that we’ve proven it’s a profitable business model, we’ve got to make it a lot easier for our tech support and customers to kind of monitor things for themselves,” he says.