Sportsplex plans are under review

Construction expected to begin by this spring 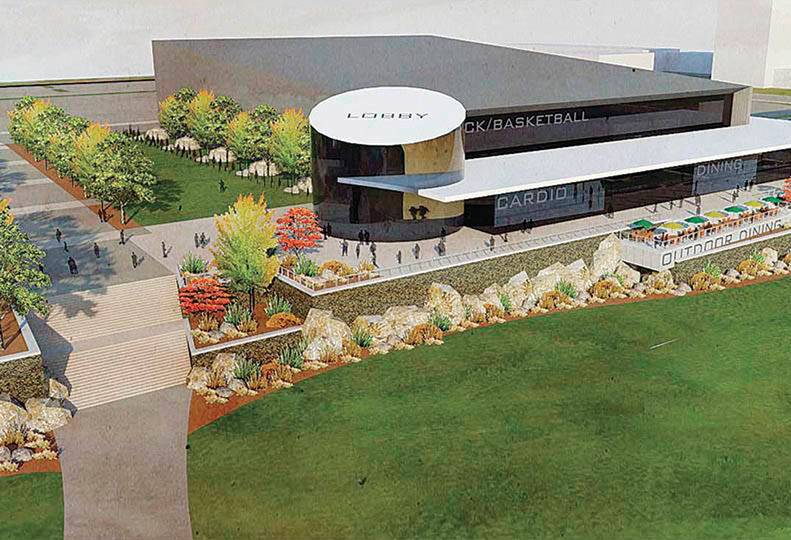 -ALSC Architects PS
Plans for the $40 million Sportsplex call for a 180,000-square-foot facility that would include a six-lane indoor track and could accommodate up to 10 basketball courts.

The $40 million Sportsplex planned near downtown is currently in the design-review and budget planning stage under the purview of the Spokane Public Facility District’s board of directors, says Stephanie Curran, CEO of the district, which will own and operate the facility.

Construction is expected to begin this year, she says.

Due to the scope of the project, the PFD also is conducting a state-required environmental review regarding the planned land use at the project site.

A design-build team consisting of Lydig Construction Inc. and Integrus Architecture PS, both of Spokane, will develop the $40 million project near downtown.

Preliminary plans show construction on the 180,000-square-foot facility could begin this spring, pending PFD board approval. Construction is expected to be complete in 2021.

The project will be located on a site on the periphery of downtown Spokane known as the North Bank, south of Dean Avenue between Washington and Howard streets. The facility will displace a portion of Cataldo Avenue that’s expected to be vacated.

Preliminary site plans also show more than 75,000 square feet are dedicated to a field house, while the rest of the square footage will be occupied by 3,000-seat bleachers, at least 14 restroom areas, offices, showers and locker rooms, and a judges’ area.

Features will include a six-lane indoor track, and the facility could fit up to 17 volleyball courts, 10 basketball courts, and up to 21 wrestling mats, according to the project website.

The Sportsplex could bring in roughly 18,000 to 23,000 additional out-of-town visitors a year and an additional $19 million to $33 million in tourism spending annually, the website says.

At least three buildings currently are located within the footprint of the planned facility. Plans show the former Carnation Co. building and a dance studio building on the site will be demolished.

The district acquired the 10,000-square-foot building, formerly the home of the Dance Street dance studio, for $2.2 million from GW Investments LLC on Feb. 13.

The Spokane County Assessor’s website shows the former Carnation building was acquired by the city of Spokane in 2000.

A Spokane Federal Credit Union-owned building also appears to lie within the footprint of the structure, however it’s unclear whether the building will be purchased and demolished.

Two public cul-de-sacs are planned for the development as well.

The project is a collaboration between the Spokane Public Facilities District, Spokane County, the city of Spokane, the Spokane Parks and Recreation department, and the Spokane Sports Commission.