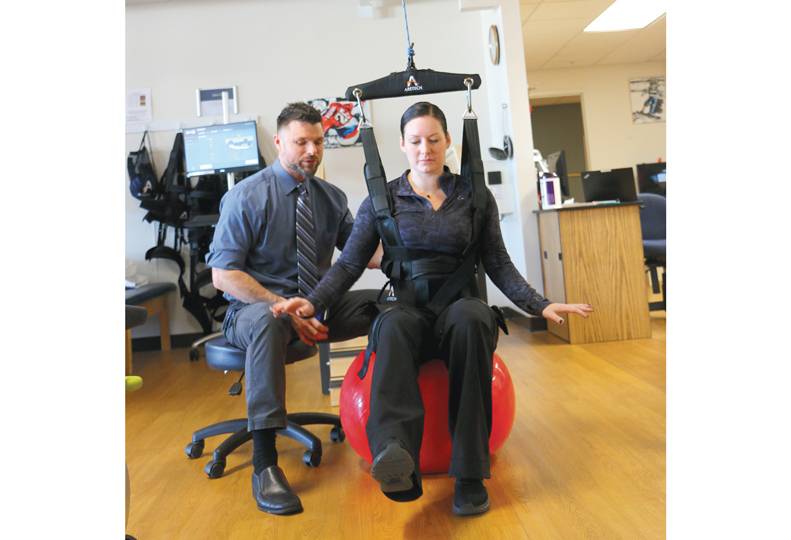 Physical therapist Jaime Hopoi goes into a trust fall. She’s on a trajectory to hit the ground face-first, but the robotic system to which her harness is attached stops her and supports her weight while she regains her balance.

In this demonstration, the ZeroG Gait and Balance System has done exactly what it was designed to do: prevent a fall during physical therapy.

The ZeroG system, which was installed last month at St. Luke’s Rehabilitation Institute’s main facility, at 711 S. Cowley, consists of a robot mounted to a U-shaped track on the ceiling of the rehabilitation center’s gym. Patients are cinched into a harness, which connects to a spreader bar attached to the robotic part of the system. A nearby touchscreen and a phone app allow physical therapists to operate the system to control how much of the patient’s weight is supported—up to 200 pounds for a patient who is in motion—how quickly the system reacts to signs of a patient starting to fall, and to simulate situations such as a sudden jolt backward.

Jake Allstot, assistant manager of rehabilitation at St. Luke’s, says the ZeroG system is ideal for patients who are relearning how to walk after a spinal cord or brain injury or an amputation, as well as patients who have multiple sclerosis or Parkinson’s disease. Patients also can practice climbing up and down stairs, getting up from the floor or a chair, and recovering from stumbling or being bumped into.

The ZeroG system, which first became operational last month, cost $260,000. The Providence Health Care Foundation, the Craig H. Neilsen Foundation and the M.J. Murdock Charitable Trust together raised $280,000 to cover the cost of the system. Providence Health Care communications manager Sandra Anderton says the excess funds go toward maintenance of the system and will be used to purchase extra harnesses and accessories.

There is no additional cost for using the ZeroG system during therapy, Allstot says, and most insurance policies that cover prescribed physical therapy will also cover use of the ZeroG system as a therapeutic treatment.

“The more clinicians that get to see it in use, the more interest our clinicians have, because they see the benefits for the patients and the staff,” Allstot says.

By the end of January, more than 30 patients had used the ZeroG system. In that time, the device saved those patients from more than 250 falls while they went through physical therapy exercises, Allstot claims.

“For patients who are relearning how to walk, (falling) is a scary thing because there’s a risk of injury with a fall, and that could mean setbacks on their road to recovery,” Allstot says. “This device eliminates that risk and fear. Patients can take that next step or go that much further without fear holding them back.”

Allstot says the rehabilitation team identifies patients who might be good candidates for the ZeroG device by looking at the patient’s goals and abilities.

“Together, they work to decide whether or not that’s an appropriate intervention,” Allstot says.

Getting some patients to a level where they’re able to use the ZeroG system can take time, he says, as the patient progresses through their physical therapy.

Dozens of hospitals and rehabilitation centers throughout the U.S. and internationally have bought the ZeroG system, but St. Luke’s is the only institution in the Inland Northwest with the system, he says, adding that the nearest hospital to have a ZeroG device is in Puyallup, Washington.

“We have something that’s internationally known right here,” Allstot says.

He says he’s pleased to have a new way to help patients.

“Their eyes light up because they don’t have fear of falling,” he says. “They see the excitement of getting better and getting stronger.”