Bus rapid-transit system to be operational in 2022 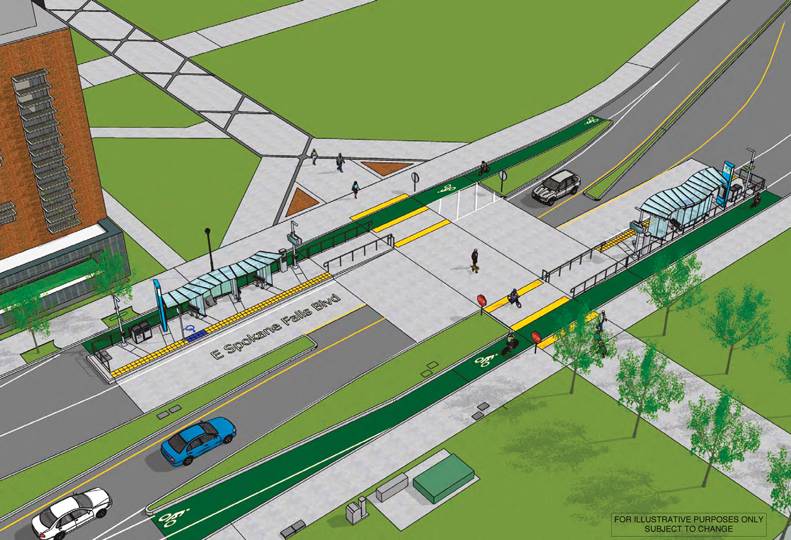 The six-mile City Line, which will extend from the Browne’s Addition neighborhood to Spokane Community College and run through downtown and the University District, is scheduled to be completed and operational in May 2022.

Cameron-Reilly LLC, of Spokane Valley, has secured the $12.5 million contract to build platforms and stops along the City Line.

Brandon Rapez-Betty, STA’s communications and customer service director, says Cameron-Reilly’s bid came in significantly below an engineer’s estimate of $20 million. It’s too early in the process, however, to know whether that will reduce the project’s overall price tag.

The Cameron-Reilly contract is one component in the $65 million cost of building 28 stations along the City Line. That figure covers construction of the charging infrastructure for the electric buses, shelters, passenger amenities, a fare-collection system, and design-and-engineering fees, among other costs.

STA expects to seek bids for the charging station buildout in July.

The other big cost for the project is the City Line buses themselves, for which STA has $19 million earmarked. Another $8.2 million is set aside as unallocated contingency funds.

About half of the stops will be constructed yet this year, and the other half are expected to be completed in 2021, Rapez-Betty says.

“Those stations are an important part of the project because they create a sense of permanence that drives the economic development component,” he says.

A study conducted in 2014 on STA’s behalf estimates property values along the City Line will increase by $175 million over 20 years, after the line becomes operational.

The bus rapid-transit system will operate similar to trolley systems used in other metropolitan areas, with preboard ticketing, frequent stops, and longer service hours. When the line is operational, STA estimates it will provide more than 1 million rides a year.

In addition to City Line work, STA has $6.5 million in projects and improvements planned. The largest among those is the $1.4 million nondiesel tank replacement at the organization’s campus on West Boone Avenue.