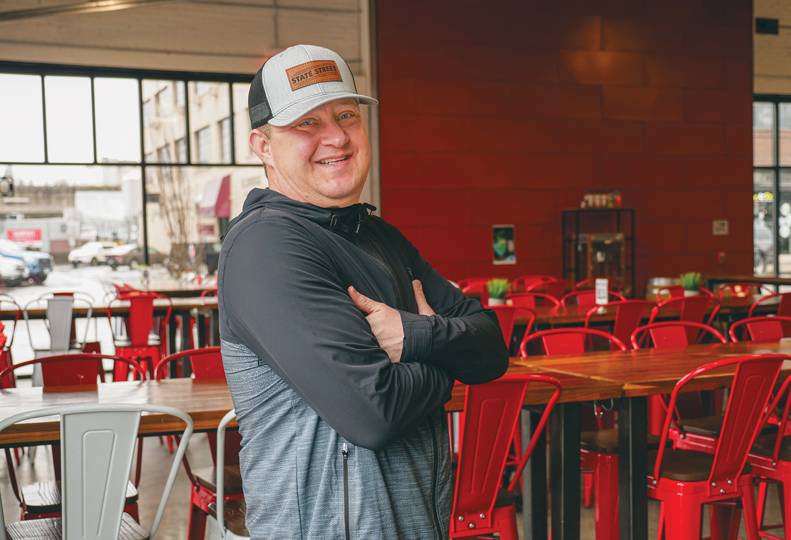 -Virginia Thomas
Matt Goodwin, shown here at Brick West Brewery, is one of the four partners in Bookoo Society Inc., which is doing business as Bookoo Chef.

A Spokane-based group of restaurant industry and marketing professionals has started a company to connect Inland Northwest chefs with potential customers who are planning small events.

The company, Bookoo Society Inc., will make reservation capabilities live on its website, bookoochef.com, on March 15, says co-founder Matt Goodwin. Doing business as Bookoo Chef, the startup plans to launch its app version of the service by April 1.

For its part in matching private chefs with event hosts, Bookoo will take a 15% to 20% cut of the total cost of booking a chef, Goodwin says.

Chefs can set price points and select which cuisines they offer, Goodwin says. Initially, most chefs are offering private event service for $70 to $120 per person. While there is no maximum headcount, Goodwin says most chefs expect to serve small private events of eight to 20 people.

As of March 2, 27 chefs had signed up with Bookoo Chef, says Goodwin, who is also owner of Goodwin Group Inc., which includes Brick West Brewing, Remedy, Backyard Public House, The Boiler Room, and The Volstead Act food and beverage establishments.

Through the website or app, event hosts can search chefs by availability, cuisine offered, and price points.

The name of the business is a play on beaucoup, the French word for “a lot” or “much,” and Goodwin says it also refers to booking private chefs.

Goodwin has united with three others to form Bookoo Society. Justin O’Neill, who formerly worked for Goodwin, is a private chef and enterprise account executive at Spiceology. Chris Allred is CEO of ScannedMedia Creative Marketing, and Noah Botnick is president of ScannedMedia.

Bookoo Chef is operating out of ScannedMedia’s offices on the periphery of downtown Spokane.

Of O’Neill, Goodwin says, “Justin’s been a chef all over town and has done some private chef events. I had a couple of people in my network who kept reaching out to me looking for private chefs, but I own restaurants, and all my chefs needed to work Fridays and Saturdays when (private parties) wanted private chefs to come do events for them.”

Goodwin regularly referred those seeking a private chef for an event to O’Neill.

“It started to take off for him, and then Justin came to me and said it would be cool if there was a way for consumers to book private chefs online,” Goodwin says. “We looked into it, and there really wasn’t a solution that matched private chefs with people who want to host an event at their house.”

“They really picked up the slack on the technology side, where Justin and I certainly lack that ability,” he  says.

Bookoo Chef will initially operate in Spokane for about four months before the company expands to serve four additional markets in which the company founders have industry connections: Seattle; San Diego, California; Las Vegas; and Miami. The company has its sights on taking Bookoo Chef to markets throughout the U.S., Goodwin says.

Bookoo Chef was born from the idea that chefs could supplement their income, or possibly rely entirely on private events, Goodwin says.

“The hope is that with Bookoo Chef, a lot of chefs can supplement their income so they can work less at a restaurant, or do this full-time,” Goodwin says. “They could actually make more doing five to six gigs a month through us than a lot of them do working full-time in a restaurant.”