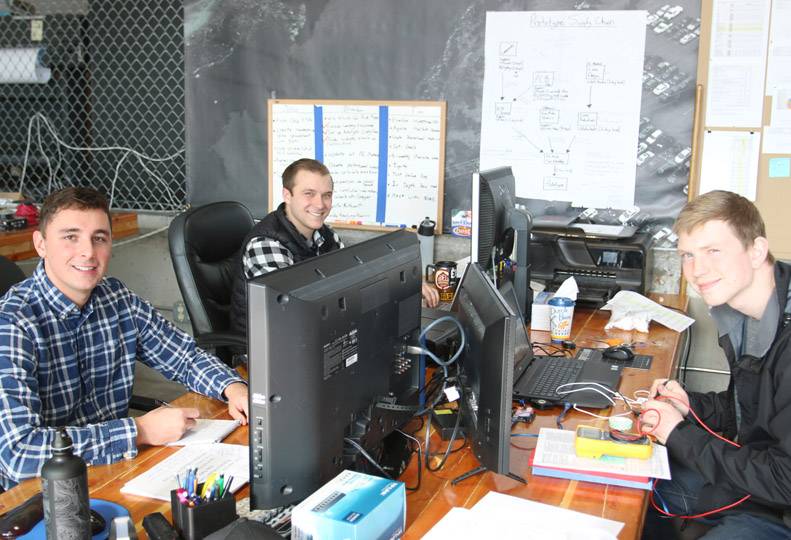 Three recent University of Idaho graduates, each hailing from families of electrical workers, have generated substantial attention from Spokane-area startup investors as a company they’ve founded, SafeGuard Equipment Inc., develops a wristband that would notify users about an imminent threat of electrocution.

Twenty-three-year-old John Thompson, who founded SafeGuard with Brandon Bledsoe, 23, and Tim Ledford, 22, says, “We’re working on a band that would offer audio, sensory, and visual notifications to the user whenever electrically charged surfaces are near.”

When complete, the AC-S wristband, which stands for alternating current sentry guard, will be about the size of a Fitbit. SafeGuard has set a target product release date of the middle to the end of summer.

The AC-S is being designed to detect electromagnetic radiation waves through the use of an antenna on the exterior of the wristband. The goal is for the AC-S to be able to detect an electrical source from a user’s closest point of contact, Thompson says.

The target market for the wristbands are utilities and other larger companies in the power industry, such as Spokane-based Avista Utilities and Liberty Lake-based Itron Inc. Also, other employers of linemen and electricians could be potential customers, Thompson says.

“We even had someone from OSHA (Occupational Safety and Health Administration) come up and say, ‘Hey, we could see this being either mandated or recommended.’ Do you know how big that would be for us?” Ledford says.

Heading into 2017, members of the Spokane Angel Alliance had funded 27 companies with more than $9.5 million, and those companies now employ hundreds of people and subsequently have gone on to raise nearly $100 million from other investors, Simpson says.

SafeGuard, which has yet to secure an order and is still early in the process of developing prototypes, wants to keep the cost of the wrist band to $350 per device. As of yet, there are no plans to market the band to the general public.

SafeGuard has had preliminary talks with Tate Technologies Inc., a Spokane contract manufacturer, about manufacturing the wristband though no contract is in place, Bledsoe says.

He says Proto Technologies Inc., of Liberty Lake, has designed early mockups for the wristband.

“Our goal is to ultimately have this be something that helps generate jobs for the area economy. We’re local people, and that’s very important to us,” Bledsoe says.

The three business partners were awarded $7,500 for their first-place finish in the new technology division at the Inland Northwest Business Plan Competition at Whitworth University. They also received a $3,000 award from Lee & Hayes PLLC, a Spokane-based intellectual property law firm.

The competition’s name has since changed to the Northwest Entrepreneur Competition starting this year.

The trio also won first place and collected a $13,000 prize at an entrepreneurial competition at Boise State University, in addition to another first-place finish, which netted a $6,700 award, at a similar competition at UI.

Simpson says he first met the three at the competition at Whitworth last spring. He was a judge on a panel that awards startup money to the creators of new business ideas.

“I was awed by them when I saw their presentation,” Simpson says. “They’re amazingly smart and talented young men. The more I listened, the more I came to understand there’s clearly a market need for what they’re creating.”

Past winners at the competition include etailz, formerly known as GreenCupboards, and Photoboxx, a Spokane-based company that bills itself as a social media hashtag printer. Etailz announced in October it had been acquired by a New York company for $75 million.

After hearing the Safeguard founders’ presentation, Simpson says he began talking with those in the utilities field and other electrical industries about whether their proposed wristband would be of value.

Simpson brought Bledsoe, Ledford, and Thompson to pitch before Mark Gustafson, senior manager of business development and strategy at Avista. That, says Simpson, piqued the company’s interest in collaborating with SafeGuard on the wristband idea.

“What I learned is that what’s available to the industry now carries a very high price and lacks the level of functionality SafeGuard wants to create,” Simpson says.

Ledford arrived in Spokane on Feb. 12 after quitting a job at Boeing Co. to go to work with his business partners full time. Ledford is from Coeur d’Alene, Thompson is from Post Falls, and Bledsoe is from Moscow.

Last month, SafeGuard’s co-founders moved the company’s operations from an apartment in Moscow to development space at the Toolbox business incubator at 840 E. Spokane Falls Blvd., on the southwest corner of Hamilton Street and Spokane Falls.

The wristband idea gained momentum during an entrepreneurial class they had at Idaho, which brings business students—Bledsoe and Ledford both have degrees in operations management—together with engineers. Thompson graduated from Idaho in December 2015, and Bledsoe and Ledford graduated in May 2016.

“I knew John carried around a notebook full of ideas so I approached him,” Ledford says. “Then we went and got Brandon involved as well. From there it turned into a 20-page business plan.”

Bledsoe says even before winners were announced at the collegiate competitions, panels of judges and business representatives in attendance were approaching the trio asking them to talk more about their idea.

“Everyone was coming up to us saying, ‘We were told to come and meet you guys,’’’ Bledsoe says. He had entered the same competitions the year before with his own startup ideas and admits they were received with mediocre response.

“So the response we were getting together was far different from what I remembered the year before,” Bledsoe says.

Adds Ledford, “We didn’t know it was going to do this well. We just thought it was a fun idea that we were just passionate about because we all have family members in the power industry.”