Striving to be a cut above 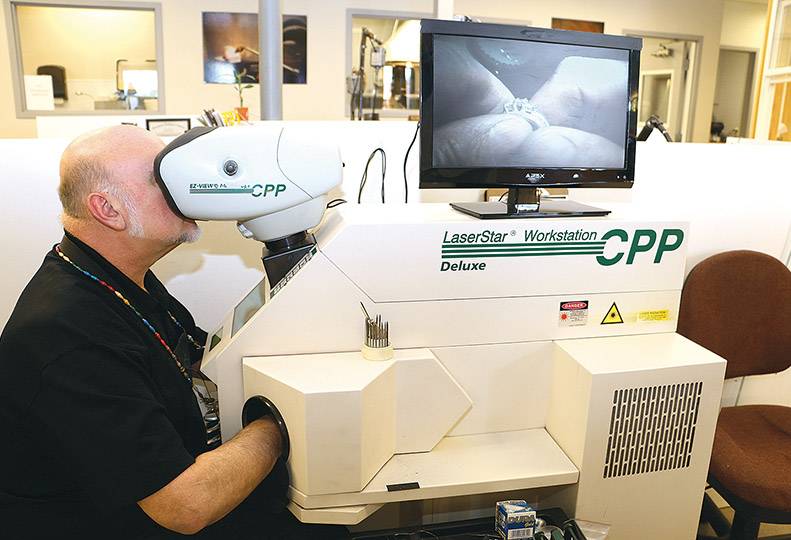 -—Judith Spitzer
Steve Ritter, a jewelry designer at the Jewelry Design Center, uses a laser to fuse gold in a ring. Customers often can watch designers work on their pieces on monitors in the store. 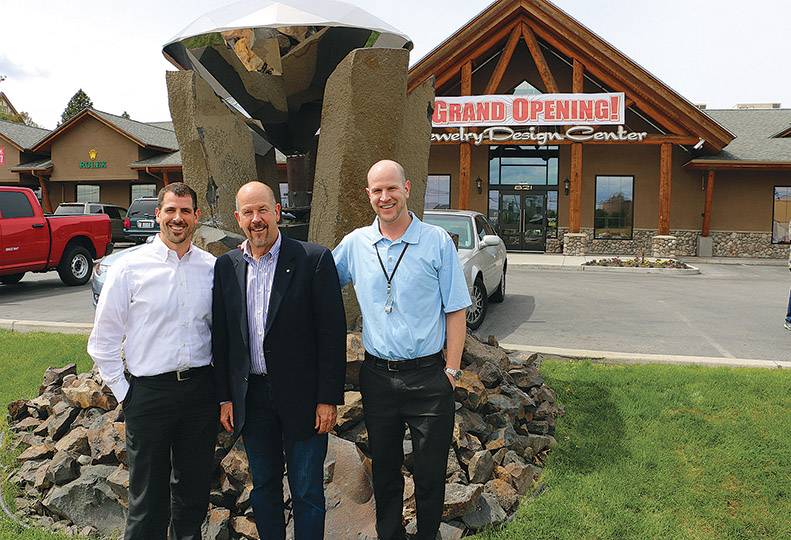 if it weren’t for Expo ’74, Doug Toone may have never opened what has become the Jewelry Design Center at 821 N. Division in Spokane.

In those days, Toone was working for Jewelry By Michaels, a local wholesale jeweler, and Expo needed a jeweler to set up a booth demonstrating working with precious metals during “Mining Week.” Expo was paying $10 a day to work the booth, and when no one else volunteered, Toone took his bench and set up. That week, he designed and cast sterling silver rings and made $200, plus the $10 a day. His son Brian says that experience gave his dad the confidence he needed to go out on his own.

“An entrepreneur was born that week,” Brian Toone says. Toone, who is president and CEO of the business his father opened in 1977, joined the family business in 1995. His brother Denver Toone joined the team in 2006 and now heads up the sales and design team.

“That’s why I say if it weren’t for Expo ’74, who knows if there would be a Jewelry Design Center,” he says.

Today, business is good at the Jewelry Design Center on North Division, easily recognizable by a giant rotating diamond sculpture out front. So good, in fact, that the store has just completed a 4,500 square foot expansion bringing its total space of retail, jewelry fabrication and repair space to almost 17,000 square feet.

Although Toone declined to discuss the company’s revenues, he says the company has been fortunate to have navigated through the recession and even grow.

“Thankfully we have a lot of diversity in our products, services and manufacturing,” he says.

The company now employs about 30 full time people, including two computer-aided design (CAD) designers, two other designers, 11 jewelers, and sales and office staff. Doug Toone continues to work at the store, doing what he loves to do best … making jewelry. Doug says he is in the store on most days, adding with a smile, “Unless I can find something more fun to do.”

When Doug Toone started Doug Toone Jewelry, with one display case, at the base of the Northtown Office Building at 4407 N. Division, he set out as a wholesaler doing work for other jewelry stores that had no jeweler.

“My dad loved creating unique pieces, and it wasn’t long before customers from other jewelers were requesting that he do their custom design work,” Brian Toone says.

During the next 27 years, the business expanded several times at the Northtown Office Building, and the jewelry company grew steadily. In 2004, the family bought the parking lot on North Division where the company is located today. “We built our dream, a full-service jewelry store, and in August 2005, moved in,” Toone says.

It took another seven years before it was necessary to expand again, and in 2012, the company started planning the expansion that was completed last month.

The sales floor is 30 percent larger now, which gives the store more space to display a wider selection of jewelry and other merchandise. Toone says the company is excited about the extra space for more inventories, but also about the additional space for manufacturing. The remainder of the expansion increased the manufacturing space by renovating the current building’s second floor and installing an elevator.

“It brings us back to our roots,” Toone says, adding that custom jewelry making is what the business was based on and continues today. “More people want something unique that tells their story. They can buy things that can be made here on-site—the design, the setting, the casting, the finishing. It’s a pretty detailed process.”

He contends the company offers something different from other jewelry stores.

“Most jewelers buy the jewelry, mark it up, and resell,” he says. “When you work with us, we are full jeweler manufacturer, and it makes a difference.”

Toone says manufacturing the jewelry enables the company to service its own products, and customers can work with the jewelers in-house. “It shortens the time it takes for custom work and/or servicing from a couple of weeks down to a couple of days,” he says.

“People also come to us and say they’ve asked other jewelers to do something that they tell them can’t be done,” he says. “We turn a lot of those people into fans by doing what others say can’t be done. People bring in photos all the time of things they like, and then say except I want this or this … we consult with them and go through the process together,” he says.

The Jewelry Design Center creates a wide array of custom pieces including rings, bracelets and necklaces, plus it designs and fabricates its own line of jewelry. Toone says he does a majority of the designing for the company’s line of jewelry.

He says he takes pride in hand-selecting the best diamonds from sources around the world.

“We are our own No. 1 vendors,” he says. “We sell more of our own line of jewelry than anyone else’s.”

The store also carries a number of designer brands, including Mikimoto, Simon G., Dabakarov, Verragio, Hearts On Fire and more.

The store also has added Rolex watches to its inventory. “We are the area’s only authorized Rolex dealer,” Toone says.

How do you get to be a Rolex dealer?

“They choose you. You don’t choose them,” he says. The Jewelry Design Center carries Rolex watches that range in price from $5,000 to about $65,000.

The Jewelry Design Center also repairs jewelry in-house and offers free-for-life maintenance sizing repairs and cleaning for diamond and engagement settings it sells. Toone says repairs are made on the premises so jewelry is kept safe and secure at all times.

“The size of the store is not indicative of the population in Spokane,” he asserts. “It’s far bigger that what the population would allow for here.”  He says customers often travel in from Idaho, Montana and even Canada to shop at the store.

“Our customers usually find something that fits their budget by selecting the setting first and then choosing the stone,” he says.

Customers are encouraged to watch jewelers working via a number of monitors in the showroom. They also can see renderings of jewelry designs on big screen monitors in the design area.

“People think it’s really cool to see the design process on the screen while it’s happening,” Toone says. “That’s one of the reasons custom is so popular. All the visceral things … you can see exactly what the item is going to look like.”

Over the past five years, the jewelry industry has changed dramatically, he says.

“It’s changed more in the last five years than it has in the last 100 years,” he says. “Now we are using 200-year-old skills and combining those techniques with modern technology. You can come up with some pretty incredible things doing that.”

The company uses 3-D computer imaging as well as an advanced 3-D printer that stacks microscopic layers of a wax/resin compound to create life-like models of the jewelry, which can be seen and tried on prior to being cast in precious metals. The latest technology uses lasers to fuse metal together, something that would have been done in the past using a blowtorch to solder the metal together.

“You can do things now you could only dream about doing before with 3-D printing, so people can actually try on a prototype of the jewelry,” Toone says. “It used to be we had to hand draw and sketch designs on a piece of paper. Then you would have to trust me that it would look like you imagined it would look. We would then hand-carve a replica and it was hard … it didn’t look real and it was green or blue. Now you can actually see what it’s going to look like, he says.

The business is community minded, Toone says, “We donate 10 percent of our revenues to charities, with a focus on children and family.”

Toone says he is proud to carry on what his dad started nearly 40 years ago.

“I am very thankful for the risk that my father took so long ago.  In business, every day is a risk, but it’s that first one that sets the stage for everything else,” he says. “I fell in love with this business as a young man.  I can’t think of doing anything else.”