Age can be factor in rejections 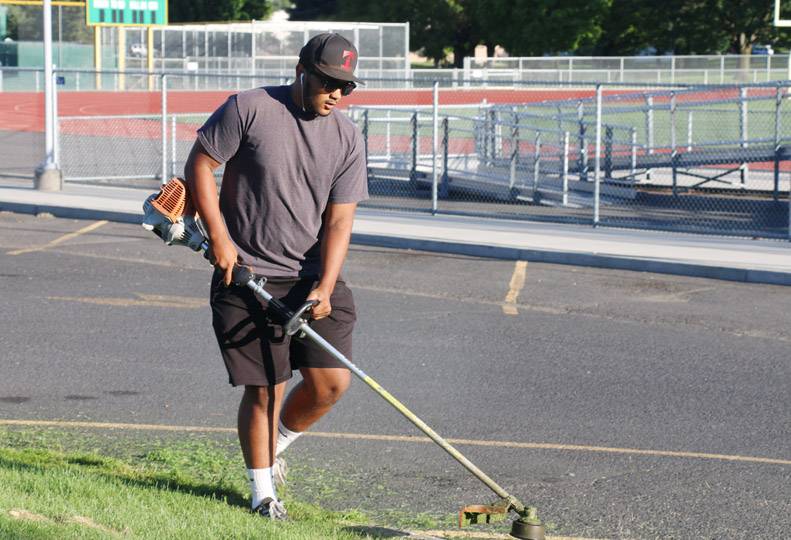 What a difference a year makes, says Anna Charlton, especially when she thinks about the employment outcomes of her sons, Khanian and Ashton Charlton, this summer.

Khanian, 18, just graduated from North Central High School and found summer work immediately as a landscaper for Spokane Public Schools. Meanwhile, Ashton, who is 17, and will be a senior at North Central in the fall, still can’t find a job.

“Since I turned 16 (in February 2016) I’ve turned in 25 job applications and have only had one interview,” Ashton says.

“Is it his long hair? Is it because he doesn’t have a long work history? Is it because employers are more selective because minimum wage is $11 an hour?” asks Anna Charlton rhetorically. “It’s not like you can get any feedback. They turn in applications, and they never hear from anyone.”

Trina Clayeux, who is the director of the Next Generation Zone at 901 E. Second, says it is indeed more challenging for minors to find work than those 18 and over.

“They often don’t have work experience, and in a field like manufacturing, by law, they’re too young to occupy those jobs,” Clayeux says of those under 18.

However, despite Ashton’s unemployment status this summer, for the second straight year, high school-aged and young-adult applicants in Spokane County experienced an overall better jobs outlook than in recent years, says Michael McBride, a business and industry analyst with the Spokane Area Workforce Development Council.

Nearly half of those jobs—1,800—were in the leisure and hospitality sector, which typically increases hiring in the summer months, and grows fastest during strong economic times. State government jobs also increased by 1,400 over the last year, he says.

“This all indicates that a lot of hiring is going on right now,” McBride says.

The Spokane MSA unemployment rate currently is 5 percent, down from 6 percent this time last year.

“The relatively low unemployment would show that the labor market is getting tighter and tighter for those businesses trying to find new workers, which may expand more job opportunities to area youth,” McBride says.

Josh Morrisey, marketing assistant for the city of Spokane’s Parks and Recreation Department, says the number of seasonal workers for the summer is down this year to just a little more than 400 employees from 600 the year before.

“But that’s only because of the fact Riverfront Park is under construction and reduced the demand for seasonal workers,” Morrisey says.

He says parks and recreation is heavily dependent upon summer youth workers.

“Regardless of the total number of seasonal workers each year, what we know is that two-thirds of them are employed in aquatics staffing city pools,” Morrisey says.

“Summer is a great place to get that foundational experience that can help lead to a career pathway,” she says.

Established by the workforce development council in 2007, the Next Generation Zone combines education, career skills and training, and employment and community resources to help young adults between 16 and 24 develop and pursue career goals.

Next Generation offers several youth-focused programs, providing its clients with the chance to finish their primary education and to help them into postsecondary placement or to secure their first professional jobs.

With an annual budget of $2 million, Next Generation receives public funding from federal, state, and local sources, as well as private donations, says Dawn Karber, COO of the Workforce Development Council.

“There are a lot of entry-level positions in the health care field that are ideal for young employees,” Franz says. “We’ve been working with the Next Generation Zone for three years, but we’ve probably really stepped up our efforts in the last six months.”

For its part, Karber says the Workforce Development Council is being more strategic about summer employment.

“We’re specifically looking at sectors of the economy that are in demand, enhancing our relationships with companies in those sectors, and exploring the possibility of creating summer internships for younger workers,” she says.

As for Ashton Charlton though, he says he’ll continue filling out applications until he can find a job.

Says Khanian, who will start school at Eastern Washington University this fall, “I think being 18 now and graduating helped me get a job real fast. I bet he (Ashton) won’t have a problem finding work next year.”

“Things are so different now,” says Anna Charlton, who is 37. “When I was 16, I went to work full time and didn’t have a problem finding a job. It was a much easier process.”

Charlton, who lives near Corbin Park on Spokane’s North Side, says a nearby fast food restaurant on Ruby Street has displayed a “Now Hiring” banner all summer. Yet, Ashton has been told the restaurant isn’t hiring.

“That’s the part that makes me angry. I know this isn’t just limited to Ashton. We keep hearing that there are jobs that are out there, but I’m not sure where one might be for him,” she says.

Clayeux says the Next Generation Zone can assist those like Charlton who have limited or no work history to list on a job application.

“There are different avenues for teens and young adults to take now to help secure that first job,” she says.

Clayeux says young workers should consider earning an occupational credential, which can be used to show employers a job candidate’s potential ability to do a job they’re applying for.

“We offer those here, and they have proven to be an effective tool to help young people get into the workforce,” Clayeux says. “It’s a challenge, but we’re equipped to help them work through those challenges.”