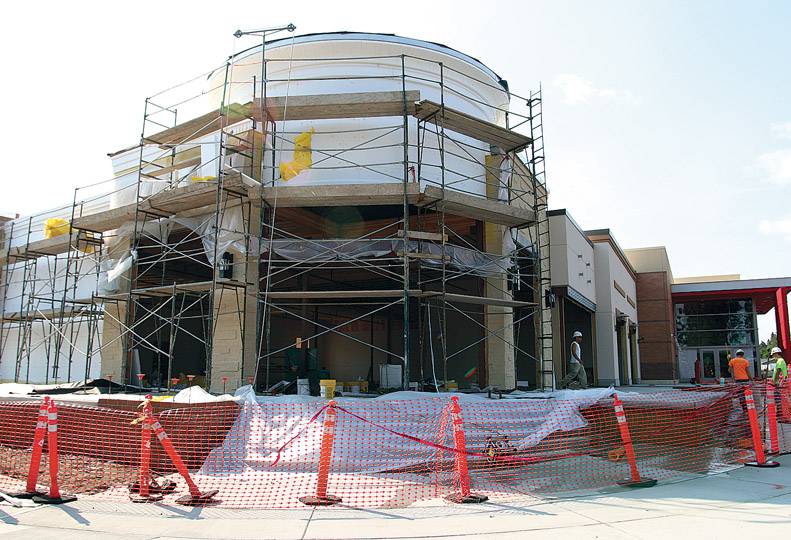 -—Mike McLean
Tenants in the turret-shaped building under construction near Target will include Mod Pizza and Sally Beauty. 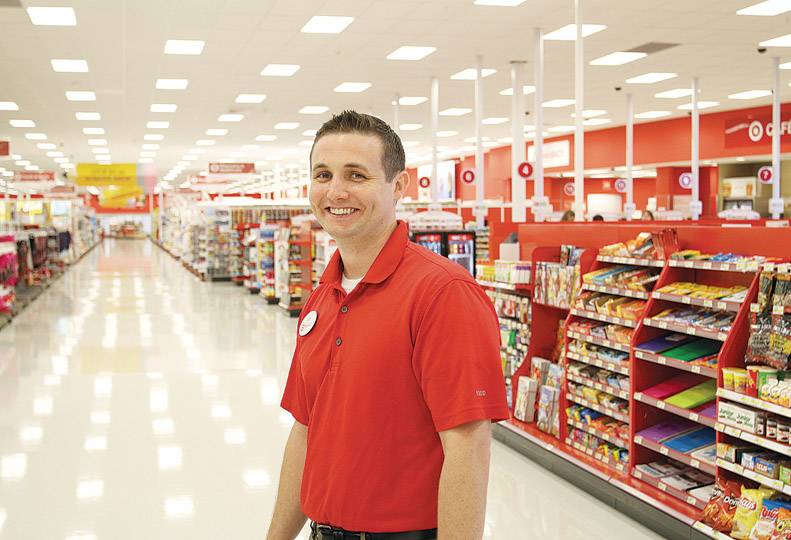 -—Mike McLean
Daniel Sweeney, manager of the South Hill Target store, says the company has high expectations for the 135,000-square-foot outlet due to its location in a “prime spot of local real estate.” 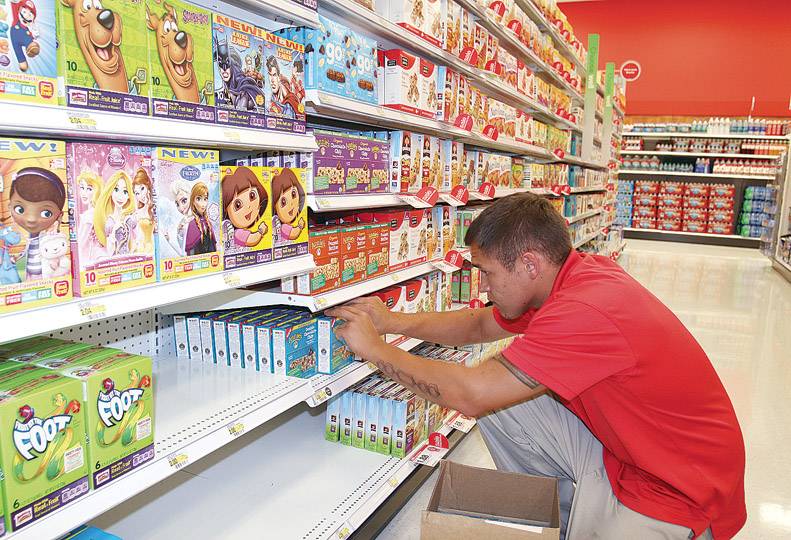 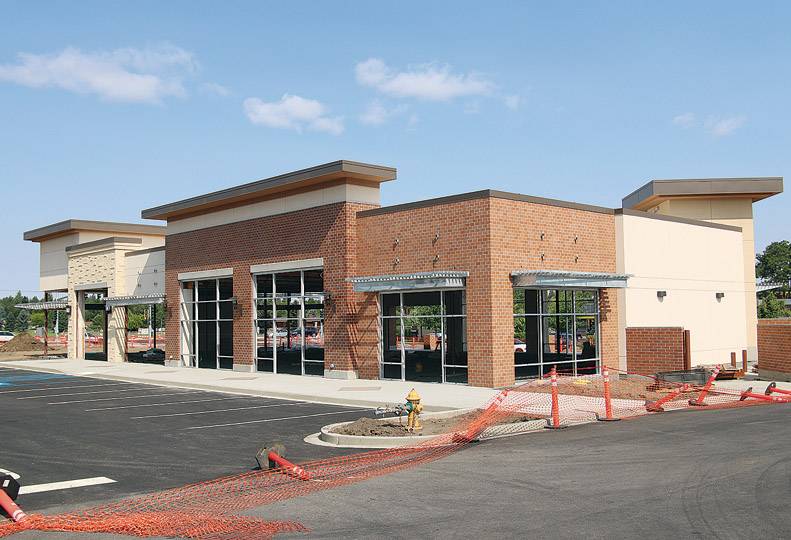 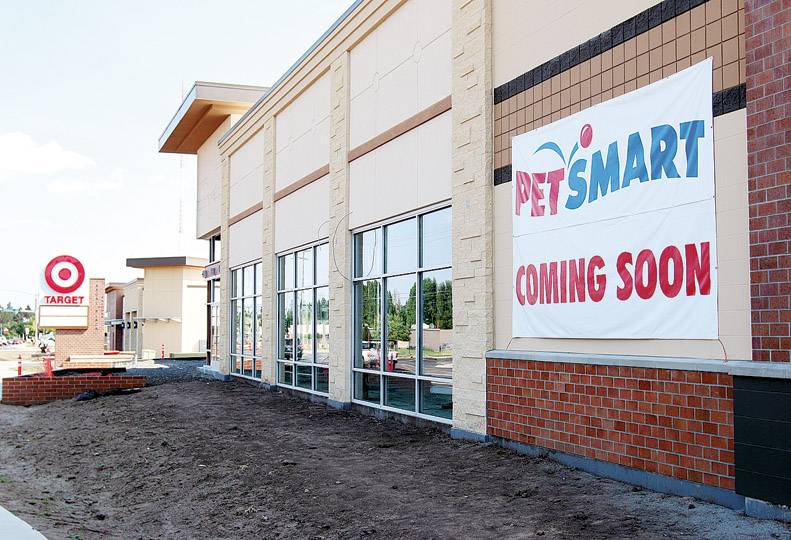 The recently opened and already busy Target retail store at the Regal Plaza shopping center reflects the demand for new retail development on the South Hill, says prominent Spokane real estate developer Dave Black, who also notes that it took more than a decade for the project to come to fruition.

Black says Target is the catalyst for other retail tenants looking at Regal Plaza and other sites on the South Hill.

“We’re negotiating five more leases,” he says of Regal Plaza. “That’s all but one of the remaining spaces.”

Sweeney says most of the store’s employees are hired locally and half of the 10-member management team is from the Spokane-Coeur d’Alene area.

The 135,000-square-foot store is a typical size for a newer Target, Sweeney says, adding, “This model is working very well.”

The store is one of five Target stores that Minneapolis-based Target Corp. has scheduled to open this year in the U.S. and the only store it’s opening this year in the Pacific Northwest, Sweeney says.

The store includes a grocery department that Target has been rolling out in its stores over the last couple of years.

“With the fresh market, our goal is to have Target guests come more often throughout the month,” he says. “It has what most people want and need for fill-in grocery shopping, including healthier options even in our own brands.”

Sweeney declines to disclose Target Corp.’s projected annual sales for the South Hill store, but says, “The company thinks the store will be very successful. We’re on a prime spot of local real estate.”

Black says businesses at Regal Plaza likely will provide a combined total of 300 to 400 permanent jobs, giving a significant boost to the local economy.

“The Target store alone will provide seven figures of sales tax to the city of Spokane each year,” he adds.

Previously announced tenants include a PetSmart retail outlet, Café Rio Mexican restaurant, and Anthony’s Beach Café seafood restaurant, all of which are expected to open in late summer or early fall, he says.

PetSmart Inc., the Phoenix-based pet and pet-supply retail chain, will occupy 12,200 square feet of space in a two-tenant building at 4919 S. Regal, near the southwest corner of Regal Plaza.

“Hopefully by September, construction will be complete and by the end of the year, everything will be full,” Black says.

Other retail developments could be nearing the horizon, he says.

Two other roughly 15-acre sites are zoned for similar developments, he says. One site, known as the KXLY property, is on the west side of Regal, across from Regal Plaza.

The other site, known as the former Home Depot parcel, also is near Regal Plaza, north of the Palouse Highway and roughly a block east of Regal.

Black says he thinks prospective retail tenants now might show more interest in those sites, but he says no announcement is imminent.

While the Regal Plaza wasn’t greeted with the same community opposition as past South Hill retail development proposals, Ted Teske, chairman of the Southgate Neighborhood Council, says the retail development could have better reflected the character of the neighborhood.

He says the district center designation for the big retail parcels in the Southgate area is meant to encourage urban developments like Kendall Yards. He asserts, however, that Regal Plaza looks more like a suburban development, like the Northpointe Plaza shopping center, on Spokane’s North Side.

Teske says no one is complaining that the anchor tenant is a big Target store, but he asserts the design doesn’t meet the spirit of the district center land use designation.

“It looks like any other Target store,” he says. “People are wanting more unique destinations where they can linger instead of show up and leave.”

Looking forward, Teske says he’d like to see development that helps out local businesses, noting that most of the Regal Plaza tenants belong to regional or national chains.

“With 45 acres of new commercial space, there’s a lot of room to fill up there,” he says. “I hope we don’t miss the opportunity to create something truly unique to Spokane or the South Hill.”

“I’m hoping to announce the first tenant in a few weeks and another shortly after that,” he says.

Regal Square, which has 7,200 square feet of floor space, can be configured to accommodate up to six tenants.

Cornerstone also is marketing an 8.5-acre site on the east side of Regal, between 53rd and 55th avenues. The land includes the parcel formerly occupied by South Regal Lumber, which vacated the property last winter.

Any development ideas there, though, are in the early concept stage, Byrd says. “It could be a lot of things. I believe there’s going to be a retail component.”

Meantime, owners of the former South Regal Lumber store have put on hold their plans to develop a new store on the north side of 57th Avenue, a block east of Regal.

Scott Case who was lumber manager at the South Regal Lumber, and now is based at an affiliated store, West Plains Building Supply, in Airway Heights, says, “Plans are drawn up; we just don’t know yet.”

Case says South Hill Lumber is a family-owned concern, and some family members are hesitant to commit the $500,000 or more that it would cost to construct the new store.

He says the owners are considering whether to buy additional property that could provide lease income.

“If we could get a couple of tenants to help offset the development costs, they might be less hesitant,” Case says.

“The fact is there is a demand for that because of the population,” he says. “That’s why Target is here. We have a relatively supply-constrained commercial market on the South Hill.”

Farther north on the South Hill, Cornerstone is in the early stages of marketing ideas for a mixed-use development tentatively called Quail Run southwest of 29th Avenue and Southeast Boulevard, adjacent to the Quail Run Office Park.

“It’s still in the design phase,” Byrd says. The development would include retail space and might also have office and retail components, he says.

“We have had proposals from prospective tenants, and we’re arranging the correct numbers and types of tenants,” Byrd says.