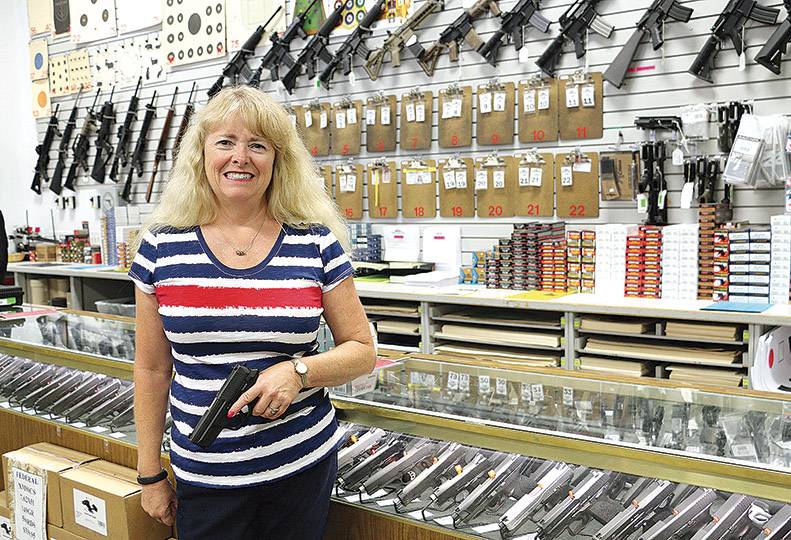 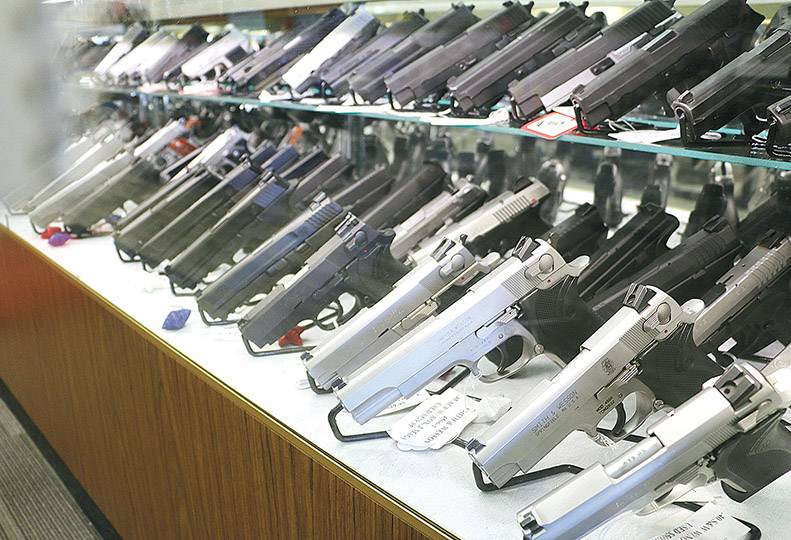 -—Virginia Thomas
Sharp Shooting buys, sells, and trades used firearms at its North Freya Way location. Regulators have said its guns sales volume is among the highest in the Spokane area.

From the shooting range on the other side of the building comes the intermittent bang of pistol shots. At the glass counters where hundreds of firearms are on display, employees discuss the finer points of the firearms prospective customers are interested in purchasing. For nearly two decades, this has been the everyday environment of the business, located at 1200 N. Freya Way in East Spokane.

“I got into this business not knowing anything,” Ball says. “I’d never shot indoors until we opened. But it’s been really good; we’ve seen continuous growth year after year.”

Sharp Shooting, which employs 21 people, had about $4 million in sales last year, and Ball says she expects a 14 percent increase this year. The store has more than 1,000 members—members receive unlimited use of the shooting range—and Ball says U.S. Bureau of Alcohol, Tobacco, Firearms and Explosives agents who monitor the store’s retail inventory have told her it’s the largest handgun dealer in the Inland Northwest.

Roughly 40 percent of the company’s revenues are from retail sales, with the remainder split evenly between the shooting range and its training classes.

“The growth has been primarily in retail and training,” she says. “The range has been stable.”

The store sells mostly handguns, defensive shotguns, and defensive rifles. Ball says the company focuses on the tactical market more than the hunting side of the industry.

“We sell Glock (brand guns) probably three to one over any other gun,” Ball says. “They’ve kind of taken over the law enforcement market, and the civilian market tends to follow.”

The range has 22 shooting lanes in two separate bays, so that Sharp Shooting can teach classes and keep lanes open for its clients. Each lane is 50 feet long, and shooters can set their targets for any distance, though most practice at 15 to 25 feet, Ball says.

Members and nonmembers alike can rent more than 100 rental handguns to use at the shooting range. Annual memberships start at $22.50 per month, which allows unlimited access to the shooting range. Military, law enforcement, and seniors get a 10 percent discount off the membership price. Nonmembers pay $17.50 per day, but can leave and return multiple times within the same day.

The range also hosts a date night on Wednesdays and Fridays, which Ball says is extremely popular, and benefits Sharp Shooting by bringing more women to the range.

“It’s a great sport for women,” Ball says. “Women just sort of get the mechanics of it. Men tend to overpower the grip of the gun.”

Sharp Shooting also provides certification for companies such as security farms that arm their employees, as well as several classes for regular civilians. Classes offered include all-female courses, an introduction to handguns, and self-defense. Ball says she prefers to keep the classes small, with about 10 people per class.

“I have two staff instructors who are certified state instructors,” Ball says. “We’ve always taken a layered approach to self-defense, because a firearm is always a last resort.”

Sharp Shooting has occupied the same 14,000-square-foot building at 1200 N. Freya Way since the day it opened in 1995.  Ball says the store plans to celebrate its 2o-year anniversary, though no solid plans have been made.

Ball says she and her husband, Steve, searched in several locations, including downtown Spokane, industrial areas, and Spokane Valley, before finding the building on Freya Way. Her husband isn’t involved in the company’s day-to-day operations, but he helps sometimes with larger projects.

“It was pretty crazy in the early days,” Ball says. “We were the first tenant.”

Ball says the building had been built to serve as a warehouse, so a great deal of renovation went into constructing dividing walls for offices, restrooms, a classroom, and the 50-foot-long shooting range.

After the work of renovating and opening a business, Ball says the company faced another challenge—a trademark violation lawsuit from an Idaho man.

“We opened under the name of Safe Shooting,” Ball says. “We hung in there for a while to keep the name. It was very expensive (to fight the lawsuit), it about buried us, but we’ve climbed out of the hole.”

Ball says the industry can be volatile due to fluctuating political climates and events such as the highly publicized Sandy Hook Elementary School shooting.

“After the shootings at Sandy Hook and in Colorado, factories struggled to keep up with demand for .22-caliber bullets,” Ball says. “You want to arm Americans, talk about gun control.”

Sharp Shooting is now seeing those .22-caliber bullets slowly come back into stock.

“Our world revolves around ammunition. We need it to teach. And who in their right mind wants to buy a gun without ammo?”

In terms of current events, Ball says she’s interested to see how security plays out as marijuana stores begin opening in Spokane, especially since the stores will be cash-only.

“We’re not sure how the state is going to handle armed security,” Ball says.