After Rover came over to Spokane 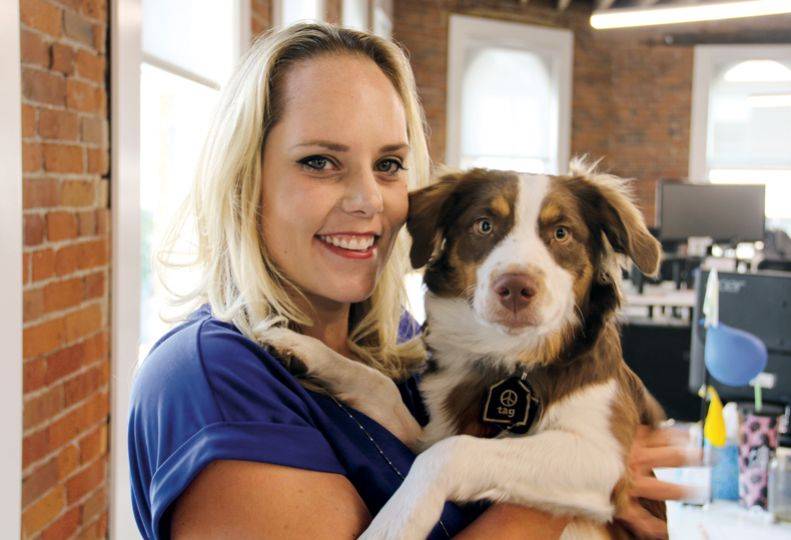 On a typical work day, between 10 and 15 dogs play, pant, and bark around Rover’s downtown Spokane office.

“In our Seattle office, we can have up to 50 dogs because we have more employees over there,” says Jennifer Summers, Rover’s Seattle-based director of safety and enforcement who’s heading up the Spokane expansion.

The Spokane office, located on the second floor of Bennett Block building at 530 W. Main, might not have as many dogs on a given day as its parent office on the West Side, but at its current clip of growth, it’s safe to assume the number of canine companions will be growing soon.

Since opening its Spokane office in September 2017, Rover has built out the office its leasing to roughly 8,000 square feet of space. Now, the company anticipates employing 75 people in the Spokane area—up from the existing count of about 65—both at the Main Avenue office and remotely, before the end of the year. Additionally, it also plans to hire more people in 2019, says Summers.

“As a company as a whole, we’re definitely growing … with that, so does the need to hire people to support that business,” she says.

Rover, also known as Rover.com, is a trade name for A Place for Rover LLC. The company offers an online platform for people to book sitters, daycare, boarding, walkers, and drop-in visits for dogs. In some markets, the company has rolled out on-demand walking as well, she says. Dog owners can check out the website, choose a sitter in the area, and book a time for the sitter to come take care of the owner’s animal.

Rover public relations manager Kristin Sandberg says owners of other pets, such as cats, also use the platform for sitting and drop-in visiting services.

In the U.S., Canada, and the United Kingdom, the company has 200,000 pet sitters and dog walkers, says Sandberg. So far, 10,000 sitters, walkers, and owners use the service in the Spokane area.

One sitter is Spokane resident Michael Bosse, who offers to walk dogs, house-sit, and check-in on the pooches.

Bosse says house-sitting is “probably the most customized of the bunch.” The service can be all day, but it can also simply entail Bosse checking in on a client’s dog and taking it outside.

Bosse has been a sitter with Rover for about seven months, he says. The service is “his full-time priority,” but he also works on the side for now to supplement his income.

Bosse says he started out with a different dog-sitting company, but he moved to Rover.

“They have amazing coverage and insurance, and they’re also a company that will get back to you when you talk to them if you have any questions,” he says.

In the summer, Bosse can take care of five or six dogs a week. This month, he took care of one pooch for 11 days, and had another booking that lasted nine.

In addition to walking, sitting, boarding, daycare, and visits, Rover also offers educational material, background checks and other security measures, and a 24/7 helpline for animal owners and sitters who have questions or concerns about problems their animals might be experiencing.

Educational material can range from “anything from breed specific things to even funny blogs on the best treats your dogs like to the proper way to put on a harness,” says Summers.

Rover earns its revenue by taking 20 percent of every service booking on its website. Summers declines to disclose 2017 revenue figures, but she says Spokane area revenue is expected to increase this year.

“We have seen that we have more sitters and more bookings in the area, especially since we moved here,” she says.

As for Summers, she says she joined Rover after adopting her second dog, Saint, in 2015.

“I literally (searched the internet for) ‘best places to work with a dog,’” says Summers. “Rover came up, and that’s how I found them, and it’s been a perfect world since.”

Since then, Summers has adopted two more pooches.