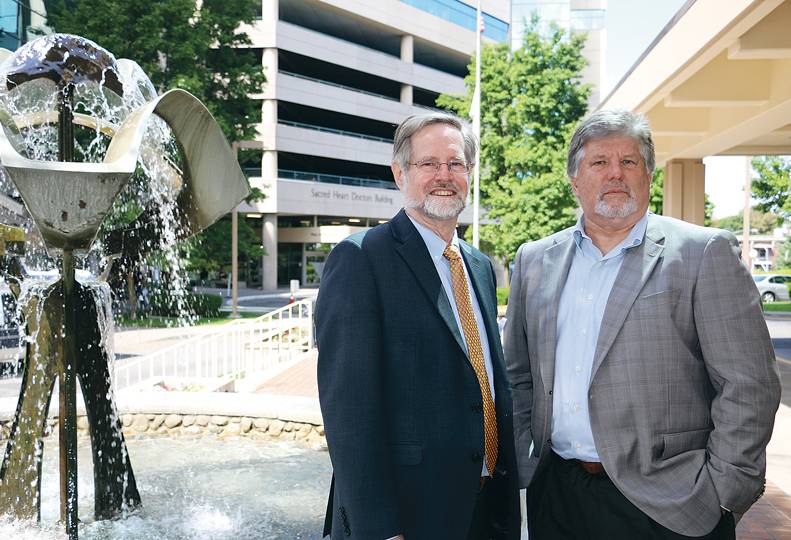 -LeAnn Bjerken
Drs. Kenneth Isaacs and Ross Bogey are among the medical professionals who hope to expand upon Spokane’s expertise in neurosciences. 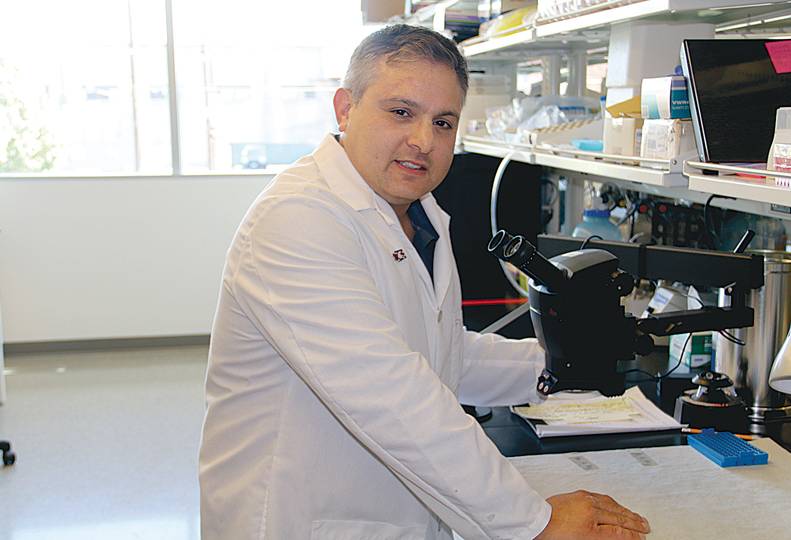 Spokane-area scientists and physicians say the need to expand neurological treatments and research is becoming more urgent as the incidence of neurodegenerative disorders, such as Alzheimer’s disease, increases among America’s aging population.

With that urgency, health experts here say they’re more focused on the development of recent new partnerships that they believe could propel Spokane toward becoming a hub for neurological research and treatment.

“There is an opportunity here for us to collaborate in education, attracting new doctors who can serve as faculty and researchers as well as providing high-caliber, quality care to patients,” says Dr. Kenneth Isaacs, director of the Providence Spokane Neuroscience Institute. “It’s also an opportunity for innovation, at a time when the medical world is exploding with new technologies to develop and explore.”

Neuroscience is the study of the brain, the spinal cord, and the nervous system, which includes all the body’s nerves outside of those locations. Neuroscientists study how the nervous system develops, its structure, and how it functions, which can include everything from sensory perception and motor commands to cognitive functions like decision making and memory.

Bogey says of St. Luke’s Rehabilitative Institute, “The majority of our focus for the last decade has been neurorehabilitation. Through our collaboration with Sacred Heart and other medical centers, as well as universities, we have some great potential to advance the education programs already in place and advance new ones.”

He says St. Luke’s currently is working to develop its movement recovery center that would encompass both clinical treatments and research.

“This would be a multidisciplinary, multisite program that would encompass movement assessment, development of and implementation of new rehabilitation protocols and devices,” he says. “The materials to create a comprehensive program like this are here, but, until now, there hasn’t been a vision for putting them together under one umbrella of both research and clinical application.”

Bogey says St. Luke’s also is already collaborating with the Washington State University Sleep and Performance Research Center, which aims to understand the neurobiology of sleep and sleep loss.

“We’ve been working with them to study patients with brain injuries and how factors relating to sleep can aid in recovery,” he says.

Issacs says both Providence and St. Luke’s want to build on current collaborations with Spokane-area universities, as well as the University of Washington School of Medicine-Gonzaga University Regional Health Partnership and the WSU Elson S. Floyd College of Medicine.

One of the first big collaborative opportunities Issacs and Bogey say health providers are most enthusiastic for is working with the recently announced Gleason Institute for Neuroscience, which will open this year at 325 E. Sprague, at the south end of the University District.

“We’re looking forward to engaging fully in the work that’s being done there to provide comprehensive care as well as the innovation and implementation of physical technologies to support patients with neurodegenerative conditions,” Issacs says.

Marcos Frank is a professor at WSU’s Elson S. Floyd College of Medicine, where he’s the chairman of the department of biomedical sciences, and the interim director for Gleason Institute for Neuroscience. He says the launch of the institute is part of a larger mission to create an integrated approach to treating and eventually curing neurodegenerative diseases.

“We’re in the process of expanding our current partnerships and forming new relationships with other hospitals and clinics here that are treating these diseases, as well as national, state, and local organizations that are focused on improving care for these patients and their families,” he says.

Frank says the new Gleason center will include three units, each with different focuses: the Clinical Research and Care Unit, the Assistive Technology and Smart Home Center, and the Discovery Research Unit.

“One of the problems with the way we treat neurodegenerative diseases is that you have specialists in different parts of the city, and people need to be shuttled to those areas to receive treatments, which is particularly difficult for those with motor diseases,” he says. “The institute gives us a sort of one-stop shop with access to new and emerging therapies and treatments, clinical trials, and the latest in assistive technologies all in one place.”

Frank says the Assistive Technology and Smart Home Center will focus on the design and building of homes that include new technology designed to assist patients with neurological conditions, while the Discovery Research Unit will include facilities that support scientists in research on early detection of neurological disease and improving current treatments.

“While we do hope to one day find a cure for these debilitating diseases, another big focus is striving to improve quality of life for those who are struggling with symptoms today,” he says.

Multicare’s Demakas says MultiCare Deaconess Hospital’s designation as a certified as a Comprehensive Stroke Center has helped establish its potential as a good partner for researchers here that are looking to improve treatment of neurological diseases.

“What we’ve been able to do to advance stroke care has built the foundation for the development of our neuroscience institute,” he says. “Our current goals at the institute are to improve patient access and create a culture focused on best possible care, as well as an environment that attracts doctors for the care of neurological disease. We’re working on several projects right now involving diseases like multiple sclerosis and epilepsy, as well as studies in spinal care.”

Demakas says he sees the current collaborations between health systems, universities, and medical schools as having the potential not only to advance neurological care, but other types of health care as well.

“With the collaborations between the University District, our health systems, and the medical schools, we have the chance to advance health care across all aspects of medicine, not just neurology,” he says. “Having those resources together in a small geographic area gives us a great environment for collaboration and shared governance that will help us develop new academic as well as commercial opportunities within health care.”

Issacs and Bogey say public interest in neuroscience research and treatment of neurological conditions has increased in recent years, for several reasons.

“One big reason is directly related to the aging population,” says Bogey. “As we continue to live longer, we see increased incidences of people developing these conditions, and therefore an increased interest in new treatments and possible cures.”

“Alzheimer’s, in particular, is an enormous challenge for the nation, accounting for some $290 billion worth of care,” adds Issacs. “Other neurodegenerative diseases, like Parkinson’s and Multiple Sclerosis, also have a continuing need for improvement in treatment and rehabilitation options.”

Demakas says current increased public interest in treatment and research of neurological diseases also might relate to their symptoms and progressive nature.

“Neurodegenerative diseases are a bit scarier compared to other health issues, because they affect our movement and ability to think and remember,” he says. “The nervous system is remarkable, but also very complex and there’s a lot we still need to learn about it. Thankfully, we’re seeing a lot of advances in technology that are helping us better understand these diseases and move toward improving quality of life for patients who have them.”

Like Issacs and Bogey, Frank says he believes Spokane always has had a strong base level of interest in neuroscience, with several well-established clinics in the area specializing in the treatment and research of neurodegenerative diseases like amyotrophic lateral sclerosis, also known as Lou Gehrig’s disease, and multiple sclerosis.

“Part of our reasoning in establishing the institute was that Spokane already has a solid base of research and health care providers here focusing on these diseases, and it is a kind of catchment area in the region for people seeking care,” he says.

He adds, “Another part of the increased interest in these diseases is the attention that Steve Gleason and his family have brought to the issue both nationally and locally by being good public advocates. We’ve also established some generous support and commitment from the health care industry, corporate partners, state and local politicians, who are all interested in seeing this take shape and flower.”

Steve Gleason, a football star at WSU and in the NFL, was diagnosed with ALS in 2011. He later founded the nonprofit Team Gleason to raise awareness of ALS and support for those who have been diagnosed with it. His experiences while living with the disease were captured on video and featured in the 2016 documentary “Gleason.”

Frank says he envisions the area around the Gleason Institute and the WSU Health Sciences campus becoming a health-focused district, with industries, businesses, and partnerships working together with the campus to create new jobs, attract researchers, and build an economy based on care.

“The process has only just begun, but I think it’s a far-sighted goal that could make our city something exceptional,” he says. “This will be a place where we can continue to foster research through seed grants, fellowships, and faculty positions, as well as leveraging the work of other schools like pharmacy, nursing, and bioengineering. The hope is for the institute to be a hub for all of those things, a place where we can accelerate this work as well as integrate it.”

“I believe the development of medical centers of education and research does have the ability to transform this community, providing an environment of entrepreneurship, innovation, invention, and world-class medical care,” he says.