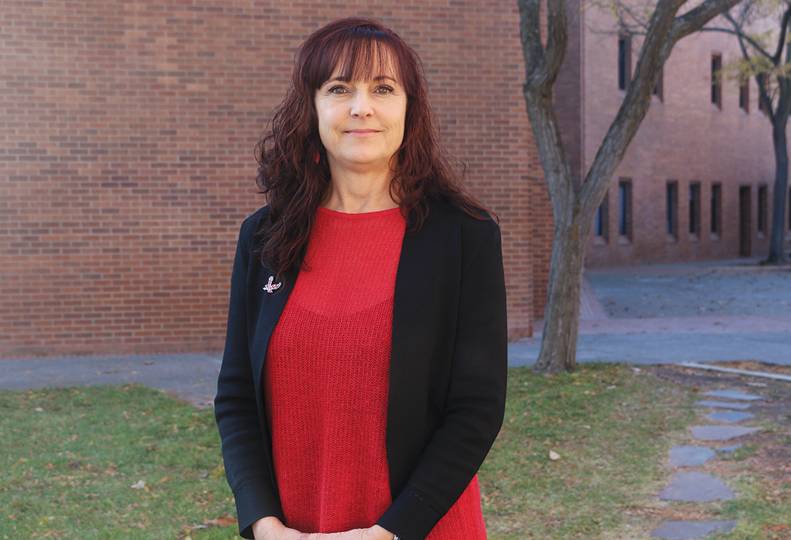 The national average for women undergraduate students majoring in engineering and computer science is 20%, while the percentage of women students in those majors at Eastern Washington University trails even that low rate at 10%, says Leslie Cornick, associate dean of the EWU College of Science, Technology, Engineering and Mathematics.

Those numbers highlight what Cornick says is a troubling disparity in the two STEM fields, and they’re spurring the college’s new 100 Women Strong initiative, which aims to boost the number of women undergraduates entering computer science and engineering fields and keep them in those fields beyond graduation.

Adapted from a similar program at Auburn University’s engineering college, 100 Women Strong is so named because it intends to get 100 EWU women alumnae of the engineering and computer science programs involved within the first three to five years. Alumnae from those programs will be founding members of 100 Women Strong, which Cornick describes as being much like an alumni membership organization.

The core of 100 Women Strong, Cornick says, involves pairing those alumnae with current undergraduates in those majors.

In addition to pairing current women undergraduates in engineering and computer science with alumnae, 100 Women Strong will provide scholarships and opportunities to study abroad, offer leadership and career development workshops, send students to conferences, and find internship placement opportunities for students in the program.

Beginning next year, 100 Women Strong will bookend the academic year with two events, a welcome luncheon and a symposium, Cornick says. The fall welcome luncheon will pair students with alumnae, while the spring symposium will offer workshops and celebrate the program’s students by featuring their research in poster format.

In the lead up to 100 Women Strong’s inaugural welcome luncheon next year, Cornick says she’s reaching out to alumnae and raising funds to support the program. Cornick says she’s seeking $25,000 to launch the program’s first year; the EWU College of STEM has committed $5,000 toward that goal, and Cornick has raised an additional $3,000 from alumnae. The program is also seeking corporate funding and partnerships.

Cornick says she envisions charging alumnae membership dues, which would maintain the program’s operating budget, so that any additional funds raised can go to students in the form of scholarships or workshops.

“Long term, I would like to see an annual operating budget of around $25,000, just for keeping the program going, but really the sky’s the limit for things like scholarships,” Cornick says. “We’d like to get some endowed scholarships that are dedicated to 100 Women Strong students. We would love to get an endowed professorship for a woman in computer science and a woman in engineering.”

Cornick says 100 Women Strong’s larger ambitions revolve around endeavoring to create a pipeline for the region’s workforce and advancing women into roles of power and authority within the engineering and computer science industries.

The Spokane area is growing quickly in STEM fields, Cornick says, with many small and midsize tech companies starting or relocating here. For example, while Boeing Co. isn’t on this side of the state, many companies here serve Boeing by manufacturing aircraft parts.

“These are the jobs that are exploding in this region, and women need to be in them. Women need to have half of those jobs -- if not more,” Cornick says. “Computer science and engineering are the most lucrative STEM fields. These jobs have the power to bring entire families out of poverty and change the trajectory of generations of families and women.”

Cornick says there are several reasons there are so few women in engineering and computer science. She says women leave those fields at every point in the career pipeline, from middle school student to tenure-track professor. She calls it “the leaky pipeline.”

Part of the problem, she says, is a self-perpetuating cycle of lack of representation.

“If you are a young woman going into a computer science major, for example, and you go into your first coding class at the college and you’re the only woman in the class, you have no peers to work with and to be connected to. That can be very isolating,” Cornick says.

Cornick, a biologist, recalls being discouraged from pursuing science when she was a teen.

“I was a junior in high school,” Cornick says. “I had a counselor tell me, ‘Oh honey, girls don’t do science, stick with theater.’”

Attitudes changed slightly between then and when EWU engineering alumna Lisa Godsil entered the program in 1987, but Godsil and one other woman classmate were the only two women in the program at the time.

“When you’re in with all the guys, you have to fit in and understand how to navigate that and … not threaten them,” Godsil says. “You have to be overly prepared in comparison to the men, because they’re going to scrutinize what you do so much more. I felt like I had to do two or three times the homework to make sure that I was prepared for any question that could possibly come up so that I would have the answer, I could earn that respect, and actually have them want me on their team.”

Schools and organizations offer more programs that encourage girls to enter the sciences than ever before, Cornick says, but fixing that end of the pipeline is a slow process.

At the other end of the pipeline, women who work in engineering and computer science sometimes encounter obstacles, including an intimidating workplace culture, an enduring gender pay gap, and a lack of job protections for women who return to work after having a child. Women are also less likely to advance into positions of power in those workplaces.

Such issues are not confined to private industry, Cornick says, nor are there enough women in positions of influence within academia.

“We need to be doing more to develop the leadership skills and the desires in women faculty members to be associate deans and deans and provosts and presidents,” she says.

Godsil, now a paint support engineer for Boeing Co., says there are more women throughout Boeing’s departments than when she started at the company more than 20 years ago.

“Because there are more of us, there’s less scrutiny,” she says. “It’s more accepted that we bring value, and they’re glad to have us here. Not that they didn’t want to have us there, but they were leery before, and I think they’re less leery now.”

Godsil says she would have appreciated having a woman mentor when she was early in her career.

“I would say 95% of the meetings I was in, I was the only female in the room,” she says. “You’re pretty much on your own to figure out the ropes in this male world.”

Having the perspective of a woman engineer experienced in the industry would have been invaluable, Godsil says.

Without role models, Cornick says, the cycle of disenfranchising women from the sciences continues.

Cornick says she hopes to fix at least some of the leaks in the career pipeline for women through 100 Women Strong.

“I wanted this program to be something that didn’t just bring new women students into the majors, and didn’t just retain them to graduation, but actually closes the loop and follows through with connecting them to employers and industry,” Cornick says. “Because Eastern is a regional public comprehensive university, we’re very much focused on workforce development and having strong relationships with our industry partners in the region.”