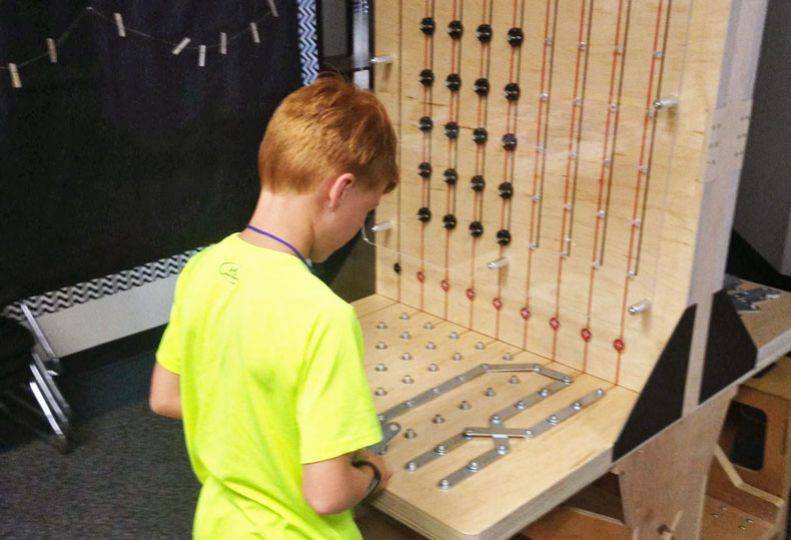 Focused on STEM fields, Flexcarts come with a curriculum that meets Next Generation Science Standards, a set of education measures being implemented across the U.S., says Quisenberry. Current Flexcart exhibits are geared for students in third to eighth grades, depending on the specific cart, says Quisenberry. Flexhibit is also working on carts for high school grades.

“In addition to that, we’re trying to make it easier (on teachers) to run a science program in his or her classroom by having the curriculum match the standards that they need to match,” says Quisenberry.

Carts bear an industrial appearance and are small enough to wheel in and out of classrooms, she says. Long term, Flexcarts are meant to cover multiple facets of STEM learning; as of now, curriculum and carts focus on the physical sciences.

Biology carts are in development, she says.

Children can be rough on equipment, Quisenberry says, so Flexhibit leases carts more than it sells them. That also enables the business to rent out refurbished carts.

On average, leasing a Flexcart costs $500 per month, but the price can increase or decrease depending on the number of carts rented and the length of the lease, she says. Renters lease a set of four carts, each equipped with six weeks worth of exhibits and curriculum.

Flexcart exhibits include circuit benches, air rockets that children can build and shoot, ring launchers, and a table that simulates earthquakes, she says.

“They’re a huge hit. The kids just love them,” says Quisenberry. “They really seem to retain more with hands-on learning, the teachers have told us.”

Last winter, Flexhibit partnered with the Mead School District to test out exhibits in the district’s fifth- and sixth-grade classrooms.

While teachers and students used the carts, Flexhibit worked out product kinks and studied how effective the carts were in helping students learn. The collaboration “was hugely successful for us in making sure that we are getting the most out of these carts,” says Quisenberry.

Flexhibit staffsshows teachers how to use the carts and trains them on the curriculum before the product is used by the students, she says.

The staff includes science teacher Wendy Harrow-Stenback, who has more than 20 years of teaching
experience.

Meeting Next Generation Science Standards is difficult, claims Quisenberry, and Flexhibit’s team worked for a long time on the curriculum to ensure the program’s quality.

“We’ve taken months to write it, months and months to get it right,” she says.

With its larger space, Quisenberry says the company intends to grow its staff here. Flexhibit also has a satellite in Seattle, which is staffed by one employee.

Quisenberry declines to disclose Flexhibit’s 2017 revenue, but she says  the company’s sales are projected to increase by about 30 percent this year.

She predicts the company, which has worked with entities in Spokane and as far-flung as Malaysia and Saudi Arabia, will continue working with local educational facilities and organizations, and also will expand its reach with national and international
businesses.