Young company gets $3.4M in seed funding round 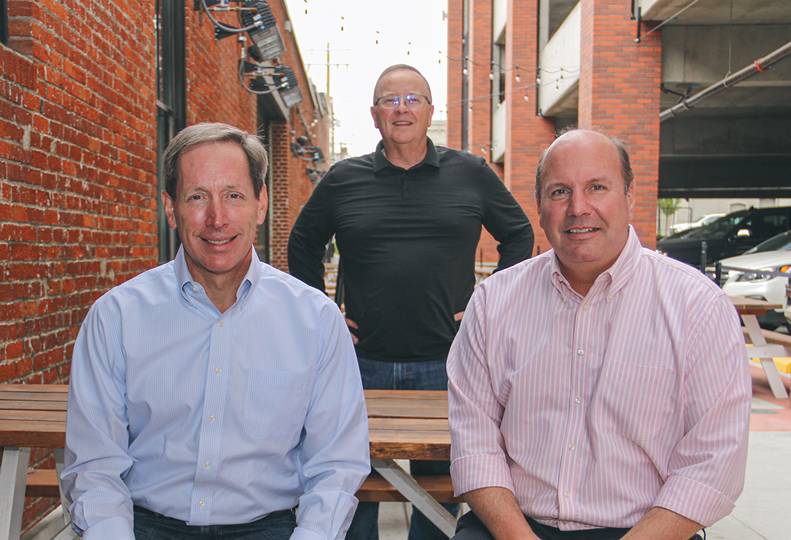 Next, the young company will focus on hiring employees, building its platform, and attracting customers.

Helmbrecht serves as the startup’s president and CEO. Brown is its chief analytics officer, and Barrie is chief product officer.

“We view Treasury4 as the intersection of finance and treasury and technology,” Brown says.

Brown says that between beta customers and others it hopes to secure this year, Treasury4 expects to begin generating revenue within the next few months. By the founders’ conservative estimates, Brown says the company will be profitable by 2024.

“We have funded all of the startup costs ourselves,” Helmbrecht says. “We’ve been fairly quiet this first year because we had to do some basic foundational work.”

Last December, Treasury4 received a $250,000 loan from the technology growth fund of Spokane-based nonprofit life sciences and technology business accelerator Ignite Northwest. The startup moved in April into about 600 square feet of space in the offices of Spokane-based financial advisory company Ten Capital Wealth Advisors LLC, in the Wonder Building. In July, the three founders began working at Treasury4 full-time.

Helmbrecht says that as Treasury4 begins to acquire customers, the company wants to develop a customer support and success arm, as well as a sales department.

Last month, Treasury4 received $3.4 million in seed funding through a convertible note, in which investors receive equity in the company. Tom Simpson, managing member of Kick-Start, president of the Spokane Angel Alliance, and president and CEO of Ignite Northwest, was a lead investor. The venture-capital arm of Spokane-based Cowles Co. was another lead investor, Helmbrecht says.

“We also have a number of Seattle-based venture funds that invested, as well as a range of individuals,” Helmbrecht says, adding, “The majority of investors came from the Spokane area.”

Barrie describes Treasury4 as a software platform to help corporations manage treasury operations. A corporate treasury, he says, is like the central bank of a corporation.

“Just like we have banks and central banks, large multinational companies have a treasury department that oversees anything and everything that touches cash, investment securities, foreign exchange exposure, financing for the organization, and risk management,” Barrie says.

Treasury4 is comprised of a set of modules in addition to a service offering. The modules include Payments4, which provides a secure payments platform for data-heavy transactions. Forex4 will offer a foreign currency exchange management system. Forecast4 will provide a tool to help manage and improve short-term treasury forecasts. Entity4 will provide management of corporate legal entities and events. Cash4 will help with management of daily account balance and transaction activity. The Advisory4 module will outsource treasury services to Treasury4.

Through the modules, the founders claim treasury departments in corporations throughout the world will be able to organize data flow and collection, organize legal entities, and oversee and analyze banking activities and investments.

“We see it as a whole suite of solutions,” Helmbrecht says. “Not every customer will need every module. It depends on their complexity and their size.”

Treasury4 intends primarily to serve companies with between $100 million and $1 billion in revenue that are national in scale or have an international presence.

“They have multiple legal entities, multiple bank partners and bank relationships, and are getting exposed to one or more currencies that are creating financial risk for their organization,” Barrie says of Treasury4’s target customers.

Helmbrecht says Treasury4 is focusing initially on companies headquartered in the U.S. By the end of this year, he hopes to have at least five customers.

“We have a couple of beta customers,” Helmbrecht says. “We’re in the early stage of beta development for those first modules.”

Brown contends that Treasury4 is different from other treasury services platforms in that customer contracts will be on a monthly basis in a subscription service model.

“Most companies want a customer to sign a long-term contract, typically three years,” Brown says. “The problem with that is, if the customer becomes unhappy, then it becomes a really difficult situation. We want to make the process of being able to disengage as easy for them as possible, whereas most vendors do the opposite.”

While Brown says the company hasn’t settled on pricing for its platform and services, he says it will be on par with similar platforms.

All three founders have experience working in the treasury department of Liberty Lake-based Itron Inc., a provider of energy and water technology and services with office locations in 20 countries. Helmbrecht served as Itron’s CFO for 10 years, during which time he brought Barrie and Brown to the company’s treasury team. The Treasury4 team also includes chief technology officer Chuck McAtee, who served in that role at Itron until March 2020.

In 2014, Itron received an award from a London-based treasury publication for the company’s treasury technology platforms.

“We won the Adam Smith award for best process reengineering solution for how we stitched together all this technology, including Itron’s global accounting system and various treasury technology, to build one of the most advanced treasury technology platforms in any company in the world,” Barrie claims.

The award caught the attention of global banks, which expressed interest in finding similar solutions for their own clients, Barrie says. Existing treasury platforms lack transparency for the end user, he contends.

“A lot of vendors tend to put artificial walls around the customer’s data and make it challenging to get the data out,” Barrie says.

The three founders of Treasury4 kept in touch after Helmbrecht and Barrie left Itron in 2014 and 2015, respectively. Brown remained with the company until earlier this year.

Helmbrecht says the startup’s commitment to the Spokane area attracted some investors.

“We want to recruit talent and work closely with universities and build internship programs,” he says.

“If you can teach somebody else something, then you know your space really well,” Barrie asserts. “It’s also a means to foster relationships with the universities and develop a talent pipeline for both future interns as well as graduates.”

Barrie says Treasury4 also has been working closely with local companies to get off the ground.

“Most of our business partners are from the local area, whether it’s external legal counsel, accounting support, we very much want to work where we can with organizations that are based here in Spokane,” Barrie says.

Brown says the company will also work to expand availability of the technology.

“We have plans to make our products mobile so that they’re available both on desktop as well as on your phone, so you can do a lot of activities wherever you are, with all the security that you need and the ability to do analyses,” Brown says.

Brown says the number four in the startup’s name refers to the four pillars of data — automation, analytics, visualization, and security — which are central to Treasury4’s services.