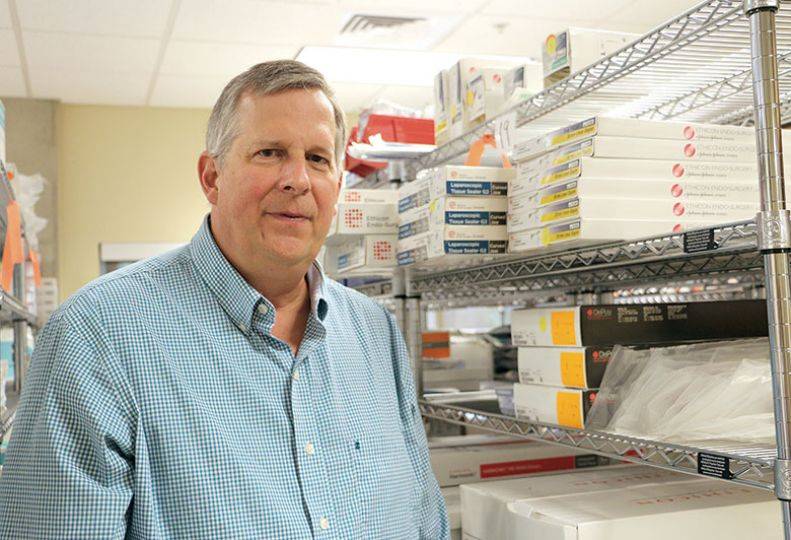 -—LeAnn Bjerken
H-Source CEO John Kupice says industry data estimates hospitals throw out about $4.5 billion in products with expiration dates and about the same dollar amount on some pharmaceuticals.

Through its H-Source Inc. subsidiary, the company offers an online transaction platform that enables hospitals to buy and sell surplus supplies to one another.

“Last year, H-Source had an estimated $1 million in revenues, and this year, we expect to double or potentially triple that amount,” says company CEO John Kupice says. “As of right now we’re not yet considered profitable, but by the end of this year we expect to reach the break-even point.”

He says the company anticipates similar growth in the second quarter, as it moves to add new health care facilities to its member platform.

“We’re expecting 2018 to be the year in which we build really meaningful revenue each quarter,” he says. “As more facilities continue to experience the cost savings of the platform, it results in increased transactions from current members as well.”

H-Source has an office in Vancouver, British Columbia, that handles corporate accounting and regulatory function, but its daily operations are run from the Spokane offices located at 120 N. Pine, in the Ignite Northwest Building on the Washington State University Spokane campus.

Kupice says the company leases about 3,500 square feet of office and storage space on the south side of the building’s first floor, from Washington State University, which subleases the building from Ignite Northwest.

Kupice says H-Source currently has 19 employees, 10 of whom work at its Spokane offices. The rest are spread out across 10 states, conducting mostly sales and programing work.

The company looks to double its staff by February, expanding its offices here to make room for additional employees and a new chief financial officer.

“We plan to hire a local CFO, as well as adding more customer care and technology employees to our staff both here and nationwide,” he says. “We’d also like to increase our sales, and work to develop a designated New York office.”

Kupice says statistics from the American Hospital Association indicate hospitals profit margins have decreased from 4.2 percent to 2.1 percent during the last three years, and one of the biggest costs continues to be in the waste of surplus supplies.

“Hospitals margins have decreased due to declining reimbursement for services or service bundles and the rising cost of health care for the labor pool,” he says. “While most have done a good job of controlling labor costs, the second largest spending category in hospitals is the supply chain, at 31 percent.”

Using data compiled from various industry sources including the Centers for Medicare and Medicaid Services, Kupice says H-Source estimates hospitals throw out about $4.5 billion in products with expiration dates, and another $4.5 billion in noncontrolled pharmaceuticals every year.

“At H-Source, we’re looking to use this network to help hospitals to increase their profits, by reducing product waste and the costs associated with it,” he says.

Kupice says there is no charge for members to join H-Source’s transaction platform. Instead the company earns its revenues through a transaction fee that ranges from 15 percent to 35 percent.

“The fee varies depending on the amount of work we’re asked to put into each transaction,” he says. “Some hospitals will ask for additional services, such as organizing supplies prior to shipping. But mostly, we help to coordinate communication and shipping logistics between sellers and buyers.”

H-Source was started in 2012 by company president Murray Walden, a medical device sales representative who saw an opportunity to reduce waste of medical devices, pharmaceuticals, and equipment.

Walden created the framework for a software platform that would allow hospitals to interact and purchase surplus supplies from one another, reducing waste and overall costs.

The company raised capital for two years while further developing their online platform, before going public on the Canadian Securities Exchange in fall of 2015.

At that point, the company had only about 20 active member clients on the network, a number which diminished slightly over the next two years as H-Source again redesigned and enhanced its platform, Kupice says.

“We spent two years enhancing the software and adding clients again,” he says. “It wasn’t until this last year that we started to earn revenue, and we’ve had four consecutive quarters of strong growth.”

Kupice says H-Source now has member clients in 32 states and is a designated preferred partner in state hospital associations in Washington, California, Colorado, Texas, and Georgia.

“We have about 1,100 facilities under contract with us, which is about 20 percent of the current U.S. market,” he says. “Of those, about 275 are what we call active transactor members—those who’ve listed, bought, or sold products on the platform in the last two weeks.”

Kupice says the company anticipates the number of active members will increase to between 375 and 400 by the end of this year.

“We expect that number to double by the end of next year, which is exciting both for us and for our investors,” he says. “The number of active transactors we have correlates to increased revenues, and investors can see that.”

“We’ve done some marketing recently to help let people know more about what we’re doing, which has generated more investor interest,” he says. “Our revenues are proving this is no longer just a concept.”

Kupice says H-Source’s ultimate goal is to extend its reach globally, something he thinks could also potentially happen by the end of the year.

Walden says the company is in the process of obtaining what are called “process” patents for the H-Source software in the U.S., Japan, and the European Union.

“The patents are process patents based on a system that recognizes medical product expiration dates, then alerts the current owner of the products nearing expiration and will also outbound a communication to a second or third group of potential buyers before expiration,” he says.

“We’ve just recently been given allowance for U.S. patents. However, there’s still a bit more due diligence before final approval.”

Both Kupice and Walden say that securing patents on the system are an important step in creating barriers for possible competitors.

“There has never been a resource like H-Source to share or sell the assets before expiration,” says Walden. “Even though many other hospitals have exactly the same drugs and devices, the idea of moving them has not really been available.”

That’s why, Walden says, a system that can alert inventory managers that products are nearing expiration and or communicate availability for acquisition, may be valuable.

In addition to the inventory passed between hospitals on the platform, H-Source also has recently begun to add new or refurbished products available directly from original equipment manufacturers, Kupice says.

“We’re working to forge relationships with manufacturers in order to refer business to them directly,” he says. “We’re always working to develop strategic partnerships that will disrupt the supply chain and save hospitals money in an environment with shrinking margins.”

Kupice says the company is in the final stages of negotiations toward an agreement that will create a strategic partnership with a key player in the supply chain on the East Coast.

“I can’t say much right now, but we’re expecting to make an announcement sometime around July 13,” he says.

Last summer, the company created another entity, H-Source Distribution Inc., which it uses to manage inventory it receives from hospital bankruptcies, Kupice says.

“Through this entity, we’re able to store and resell inventory from hospitals that have gone out of business, without distracting from the sales on our core platform between active members,” he says.

“It also makes the process easier for liquidators, as they can use us to determine a value estimate of all the product, and we’re also able to purchase and resell it to potential buyers for them.”

Kupice says excess inventory from bankruptcy sales is kept at H-Source’s Spokane offices, but as sales grow, the company might need to consider additional warehouse space.