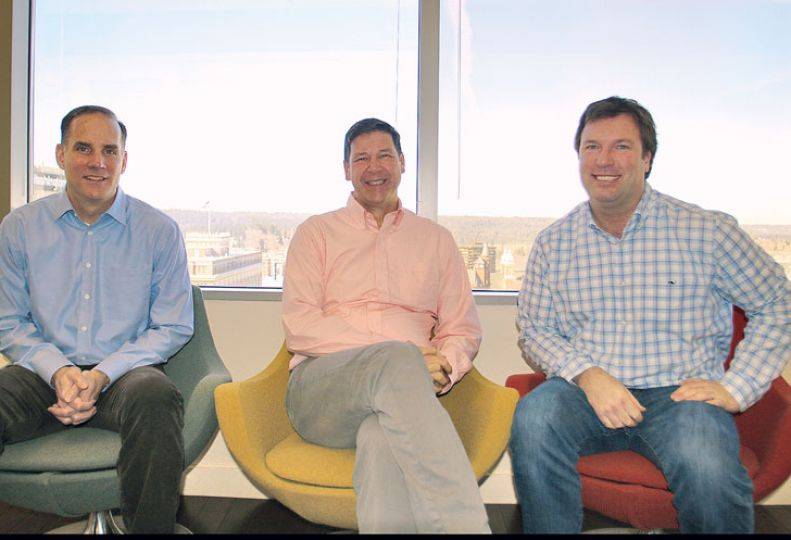 -—Kevin Blocker
From left to right are Lee & Hayes’ Brett Nelson, partner and chemical and life sciences chairman; Lewis Lee, founder; and Richard Denenny, CFO and president. Denenny says the firm had its strongest start to a year with its activity in January and February.

Spurred in part by customer growth in China, as well as securing more work from U.S.-based companies doing business in China, Spokane-based intellectual property law firm Lee & Hayes PLLC has experienced record annual revenue in each of the last couple of years, some of its partners say.

“Quarter one is shaping up to be our most profitable ever,” Denenney says. “January was the strongest production month in the firm’s history, and January and February combined represent the strongest start to the year the firm has ever had.”

Representatives from the firm decline to disclose Lee & Hayes’ annual revenue, except to say it increased 5 percent in 2017 compared with 2016 revenues.

“The last two years represent the most profitable years in the firm’s history,” Denenney says.

He adds, “It really comes down to our clients giving us more and more work.”

Since its founding in December 1994 by Lewis Lee and Dan Hayes—both of whom remain partners—the firm has become regarded as one of the nation’s top intellectual property law firms, doing business with customers around the world. Lee & Hayes was named one of the nation’s “Best Law Firms” by U.S. News & World Report and Best Lawyers in 2017.

Lee & Hayes offers a range of IP assistance, analysis, and counseling, along with providing other corporate legal services. Its clients develop technologies, products, and services in fields such as electronics, life sciences, computer software and hardware, network and semiconductor technologies, digital media, e-commerce, and telecommunications.

Lee & Hayes is headquartered on the 13th and 14th floors of the Bank of America Financial Center, at 601 W. Riverside, in downtown Spokane.

Lee, the firm’s managing member, says Lee & Hayes has grown beyond Spokane, however, with offices in Seattle; Vancouver, Wash.; Austin, Texas; Atlanta; Rochester, N.Y.; and Washington, D.C. The firm has close to 160 total employees, half of whom are attorneys. Roughly two-thirds of the firm’s total workforce is based here, Lee says.

Although the firm offers a wide array of services, Lee says Lee & Hayes is an “overwhelmingly IP-centric firm.” He estimates as much as 85 percent of the firm’s customer’s holdings are intangible assets, which includes patents and copyrights, software, and other tech-based assets.

Lee says the firm has benefited greatly from the proliferation of today’s technology.

“Apple and Google are leading the way, not ExxonMobile and other companies like the way they were 40 years ago,” Lee says.

The speed of invention today is unprecedented. In the U.S., from 1791 to 1911, a total of 1 million patents were issued. Since then, more than 9 million patents have been issued, and the 10 millionth patent is expected to be issued within the next three years, Lee says.

In addition to technology fueling the rise of patents being filed, an emerging Chinese economy also is helping to propel growth for Lee & Hayes.

In response to the growing Chinese economy, Lee & Hayes hired patent attorney—and now a partner—Brett Nelson, to the firm in 2012. Nelson lived in Beijing during the 1990s and is fluent in Mandarin.

Lee says Microsoft Corp. hired Lee & Hayes when it set up Microsoft Research Asia, in Beijing, to do business in China as the software company sought to cultivate relationships with Chinese businesses.

That connection helped Lee & Hayes open even more doors to Chinese businesses, and other companies from around the world looking to grow markets in China.

“Here’s a good way to explain the importance of China to global business,” Nelson says. “Over at least the two decades, more than 300-million plus people there have entered the middle class. That’s the entire population of the U.S.”

Because China is the most populous nation in the world with 1.4 billion residents, Nelson adds, “China’s middle class will only continue to grow.”

Whereas the founding fathers of the U.S. insisted more than 200 years ago that the Constitution promote the progress of science and the arts through the issuance of patents, China didn’t institute a patent law until 1984.

“There are maybe a handful of patent attorneys in the entire country,” Nelson says. “So, they’re following the IP leads of other nations around the world to develop their patent laws.”

In working with Chinese businesses, western nations hope to reduce patent infringement, pirated software, counterfeit goods, and theft of trade secrets that cost the U.S. economy alone somewhere between $225 billion to $600 billion every year, according to the Commission on the Theft of American Intellectual Property.

“The theft of IP is very much ongoing,” Lee says. “But they’re working hard to change that impression.”