Aon unit anticipates it will nearly double its employment 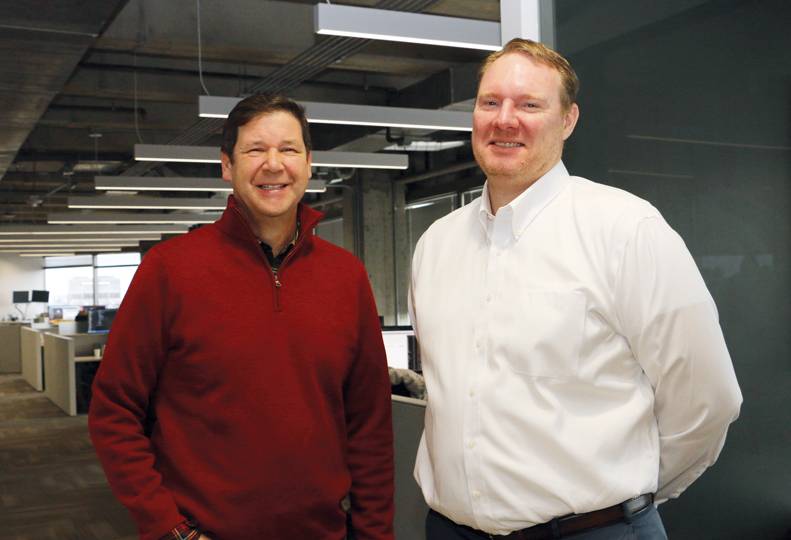 Nearly 18 months after the quiet acquisition of Spokane-based 601West by global insurance giant Aon PLC, the small intellectual property business consultancy has grown to nearly 120 employees globally and is expected to nearly double its staff within the next 18 months, says Lewis Lee.

Lee is a founder of Spokane-based Lee & Hayes PLLC intellectual property law firm, of which 601West used to be a business unit. He now serves as CEO of Aon Intellectual Property Solutions, the new name for the quickly growing consultancy that Chicago-based Aon acquired in May 2018 as part of its drive into providing insurance plans and valuation solutions for the growing intellectual property market, he says.

Lee and a group of nine Lee & Hayes employees jumped to Aon when the company acquired 601West’s assets.

Now, the Aon IP Solutions team occupies about half of a floor in the Bank of America building, at 601 W. Riverside, in downtown Spokane, and is looking to expand onto another floor next year to accommodate growth, says Sam Fleming, Aon IP Solutions chief technical officer.

Lee says about 40 employees are based in the Spokane office, the rest are spread among the group’s other three offices in Seattle, Chicago, and Boston, as well as a few remote workers in London and Hong Kong.

Fleming adds that about six employees work remotely but report to the Spokane office, which is the group’s most prominent location.

Lee anticipates Aon IP Solutions will grow to over 200 employees by the end of 2020, with a good portion of those jobs being based in Spokane.

Richard Denenny, president of Lee & Hayes, observes that the jobs are all net new, primary jobs, meaning they’re jobs funded with money that comes from outside the area.

Lee & Hayes had a long-standing partnership with Aon, so the shift felt natural, says Denenny.

“In reality, what they were really looking to do is hire the team and bring the team on,” Denenny contends. “Aon has made a push into intellectual property and they wanted to form a team to be able to lead that effort. Lewis was identified -- and appropriately so -- as the right person to lead the team.”

Denenny says the acquisition presented unparalleled opportunities for the IP group to grow and reach its goals, so the law firm supported Lee’s decision to leave.

“While there’s always some nervousness around anyone departing who’s in a senior position - let alone the founder of the firm - it was unequivocally positive from my perspective,” he says.

Denenny declines to disclose the company’s annual revenue but says 2018 was one of Lee & Hayes best business years with the addition of four Fortune 100 companies to its client base and growth in the top line revenue.

“Aon, in particular, was interested in developing products to insure intangible assets like trade secrets against trade secret theft or cyberattacks,” Lee says.

Lee declines to disclose the terms of the transaction.

More than 85% of the value of companies in the S&P 500 is in intangible assets, he contends, which accounts for about $60 trillion globally.

“As a result of that innovation-driven economy, the other major thing that we’ve seen is this historic rotation in asset value from tangible based assets to intangible based assets,” Lee says. “And the insurance industry historically has not addressed it.”

On the risk mitigation side, the group released an intellectual property liability product that covers IP infringement; trade secret theft protection; and collateral protection insurance. A computing platform for vendor and supply chain management also is currently in the works, Lee says.

He expects the vendor platform, a system meant to manage suppliers and to bring companies into insurance compliance, will be available during the first quarter of next year.

Fleming adds, “There’s varying degrees of completion on that. We’re trying to have a fully automated system.”

The initial release will have a minimum set of tools available and the team will continue to evolve the product throughout the year, he says.

“The vision that Lewis had for this team, to go and create digital signatures for the hundreds of millions of documents in the patent landscape, and then actually make sense of that from a natural language and processing perspective, it’s no small undertaking,” he contends.

On the value creation side, the group has an asset valuation team that has developed products for the valuation of lending, insurance, or mergers and acquisitions.

Lee says that Fleming also leads a team focused on core research, natural language processing, artificial intelligence, and machine learning that can be applied to intellectual property and intangible assets.

Moving forward, the “goal is to continue to bring online new insurance products, but also we are looking to open up capital markets around intangible assets,” Lee says.

He contends an emerging market is growing around direct lending to businesses based on intellectual property as collateral.

“We will continue to develop technology in Spokane so that we’ll eventually get to the point where we can assess and value intellectual property in real time,” says Lee. “That’s kind of our ultimate goal.”

He contends this will give companies the ability to leverage an untapped area of capital -- intellectual property -- and use it to secure financing and accelerate growth.

Fleming adds, “One of the challenges is creating more vehicles for that capital to be leveraged and realized. We really don’t have those. We’re not investing domestically in plants, property, and equipment. We’re investing in IP.”

He contends the ability to get loans based on the value of a company’s intangible assets is a critical component to future economic growth.

Lee asserts intangible assets will reach the same level of public familiarity as real estate in the future.

He adds, “It’s a massive asset class, probably the most valuable asset class on the face of the earth and people don’t have the tools, the education, and the techniques to really understand it in a way that makes it super easy to use in business transactions that are happening every day.”

Aon PLC is a publicly traded company with offices all over the globe that provides solutions for risk, retirement, and health. It has over 50,000 employees in 120 countries.

In the third quarter of 2019, Aon reported a total revenue growth of 1% compared to the year-earlier quarter, to $2.4 billion.