Mind to Market: Filling a startup funding gap in Spokane 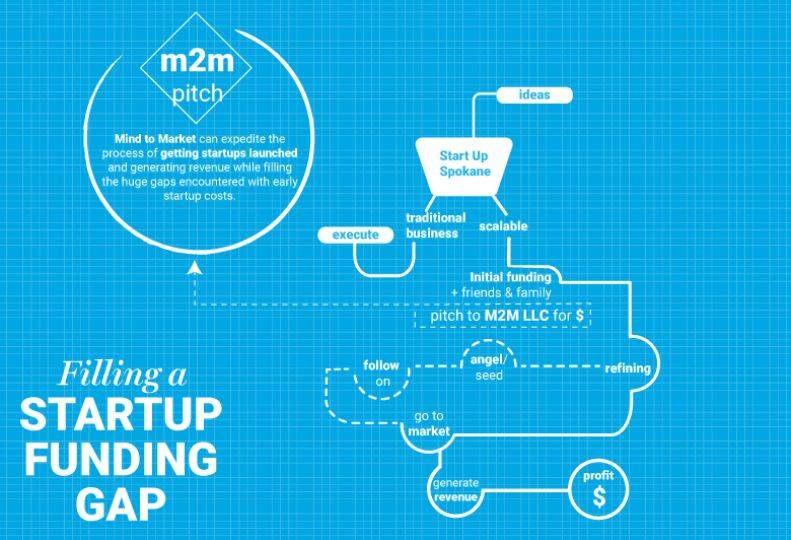 A handful of Spokane-area investors, including a mix of organizations and individuals, has developed Mind to Market LLC to invest in early-stage startups—and to fill a gap in the region’s entrepreneurial ecosystem.

Steve Trabun, Avista Corp.’s regional business manager who also serves as a liaison to Startup Spokane, says the group has put together an initial $825,000 to invest in those early-stage startup ideas that show a strong chance of being successful in a relatively short period of time.

Trabun says local investors have recognized a funding shortage in Spokane for aspiring entrepreneurs early in the phase of trying to get businesses off the ground, and creation of the Mind to Market program is an attempt on their part to close that gap in the region’s entrepreneurial ecosystem.

Budding entrepreneurs identified by Startup Spokane and its other partners as having strong business ideas that can potentially launch quickly, will be placed in Mind to Market’s new two-week, rapid commercialization program for the chance to pitch to the investors for startup capital, he says.

Trabun says Mind to Market is a collaborative effort involving several different entities. He declines to identify the investors.

“The best I can say is that there’s only a handful of them,” he says.

Megan Hulsey, entrepreneurship program manager for Startup Spokane, says that while early-phase startup ideas typically are self-funded by founders initially, the next round of funding often comes from friends and family members. And that, says Hulsey, is a challenge here.

“In Spokane, people have a hard time accessing money at that level. We don’t have family members that retired out of Boeing and Microsoft,” she says.

Greater Spokane Incorporated formed Startup Spokane in 2015 to identify scalable companies—those believed to have the ability to grow and generate profit quickly—and then to get them participating in a series of networks and training programs while pairing them with mentors currently serving within the network.

Despite the continued growth of the region’s startup infrastructure in recent years, the lack of early-stage funding keeps many business ideas from ever taking root, Hulsey says.

“We’ve frequently found ourselves engaging with businesses in stage one of the startup process, which includes trying to help them find funding streams,” Savitz says. “As an accelerator, that’s just not something you’re supposed to do.”

“There’s a shortage of deal flow potential here,” he says, referring to the rate at which business proposals and investment pitches are being received by financiers, such as investment bankers and venture capitalists.

Formed near the end of 2014 with the goal of helping young tech companies overcome early startup challenges, Ignite Northwest and its board of directors followed the leads of other accelerator companies around the country, like Y-Combinator, a Silicon Valley-based company with a portfolio that includes Airbnb and Dropbox.

Traditional accelerators are supposed to help companies that already have working prototypes and have entered the marketplace and have defensible intellectual property, Savitz says.

Since its first class of fall 2015, Ignite Northwest has taught a total of five cohorts in a 13-week business course. The companies hear from Ignite Northwest’s Professional Services Network—local business owners who have proven to be successful in the areas of intellectual property, market planning and operations, and establishing sales channels, he says.

Regionally, close to 60 different entities comprised of universities, businesses, accelerators, and incubators are actively engaged with each other to identify startup ideas and businesses that can help generate the region’s economy, Hulsey says.

One of those entities is CoMotion, a business development arm of the University of Washington, which established CoMotion Labs @ Spokane last year. Brady Ryan, CoMotion’s manager here, contends he’s never seen an early-stage accelerator like Mind to Market.

“This program is unique. I don’t know of any programs that are this early stage and this far upstream for companies,” Ryan says.

“We’re trying to provide them with support before they may have to pivot a bunch of times with a business concept,” says Ryan, referring to CoMotion’s efforts to assist Startup Spokane and its other partners in the entrepreneurial ecosytem.

Hulsey was hired by Greater Spokane Incorporated a year ago. GSI began operating Startup Spokane in October 2015. Startup Spokane is housed in a location called Share Space, in the Plechner Building, at 610 W. Second.

Startup Spokane is also an affiliate program of Startup Washington, an initiative developed by the Washington state Department of Commerce’s Office of Economic Development and Competitiveness.

“Our goal is to minimize duplication and to enhance each one of our clients’ ability to access the services they need,” she says.

Hulsey says those mentors, what Startup Spokane calls subject matter experts, include accountants, attorneys, and marketing specialists, to meet with business owners, or those with business ideas, to help them begin research to develop a business and marketing plan.

Among the other activities it supports, Startup Spokane hosts a series of workshops, training programs, and individual meetings with the founders of the companies with the goal of getting them ready potentially to pitch for investment, or apply for a loan, to get the money needed to scale the company, she says.