Putting the tech in architecture 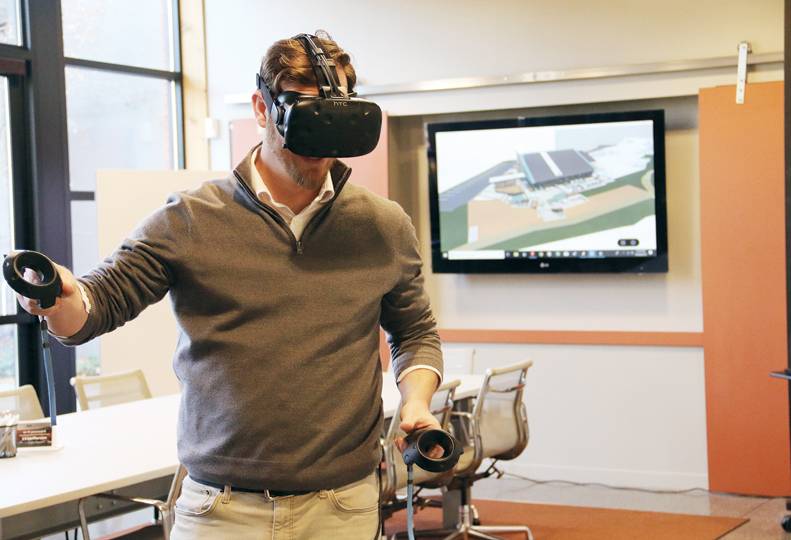 -NATASHA NELLIS
Technician Dillon Reese works with some of the tools used by Bernardo|Wills Architects PC, in its downtown Spokane oﬃces.

The flood of technology over the past 10 years has changed the day-to-day operations of Inland Northwest architecture firms, and up-and-coming technology advances have the potential to change the industry even more, experts say.

A growing industry of design and building information modeling software, ranging from programs that have been around for years, like AutoCAD and Rhinoceros to newer ones such as Revit and Lumion, has streamlined workflows and made projects more time efficient, they say. Hardware advances, including drones, 3D printers, laser cutters, and virtual and augmented reality devices have increased significantly a firm’s ability to communicate with clients and to market its work.

“Tech gives the ability to push the limits of science at a higher rate,” says Matthew Collins, owner of Spokane-based Uptic Studios.

Representatives of Spokane-area design firms across the board say the ability to work collaboratively through linked software has been a boon to the industry, allowing for a real-time ability to make changes in one program and have it appear in another.

For example, as an architect is making changes in 3D modeling software like Revit or SketchUp, another employee working on renderings or animation in Lumion can see the changes immediately, nearly removing the need to jump between programs and risk missing a change, says Steve Goodmansen, associate at Spokane-based Bernardo|Wills Architecture PC.

Most agree Revit and other building information modeling, or BIM, technology are the most used tools.

Preston Potratz, principal and architect at Spokane-based Integrus Architecture PS, says technological advances in that area of the industry have opened a myriad of potential. BIM technology in Revit now allows architects to include a materials database that informs contractors how many cubic yards of concrete is needed, for example, or how many lightbulbs need to be ordered, he says.

Potratz says the tool even could be handed off to clients to allow them to maintain the building by tracking lights, furniture, and filters better.

The only rub, he contends, are the legal risks.

“When I hand it off to a contractor, and they’ve got the capability to manipulate or change that model … who becomes responsible for an error on something that actually got built?” he asks. However, he adds, projects that use general contractor/construction manager or design-build delivery methods alleviate quite a bit of risk because of the inherent partnership between the companies.

Integrus has about 130 employees and handles about 50 projects annually between its Spokane and Seattle offices, says Potratz.

Rob Kuffel, associate principal and head of internal digital practices at Spokane-based NAC Architecture, says advances in rendering technology used by the industry have been driven largely by the video game industry.

“We’re able to very quickly render buildings and environments, whereas before it would take days, it (now) can take hours, if that. We’re moving toward the ability to really have real-time rendering as we design,” he says.

While the video game and movie animation industries have been using such technologies for years, the architecture industry has lagged because it has fewer resources and more legal hurdles to overcome before it can adopt new technologies, he contends.

Now, BIM software such as Revit and AutoCAD are industry standards. Meantime, each Spokane-area firm is at a different stage of technology integration in the 3D printing, drone, and VR fields.

ALSC Architects PS, of Spokane, is looking to be an industry leader in technology, says Indy Dehal, principal. To that end, the midsized firm has invested in three 3D printers, with the intention of securing a fourth by year-end, he says.

Such printers are used to create 3D models of building concepts that traditionally were built using balsa wood.

ALSC is remodeling its office at 203 N. Washington to include a “clean room” for 3D modeling and laser cutting as well as a “dirty room” that will have bandsaws, sanding equipment, and other tools for cleaning up model edges.

“I think the takeaway we’ve seen is that people love to touch and feel and play with each one of these pieces. They get so engaged in the architecture,” Dehal says.

Scott Tschritter, of ALSC, adds, “It’s tactile. They can get involved with the design. Most people can’t imagine 3D objects as well as we can, so when they get to see this it gets them engaged in knowing exactly what they’re getting from us and their finished product.”

ALSC has also set its sights on purchasing a waterjet cutting tool, says Dehal. A waterjet will enable the firm to begin cutting models in different materials, such as glass, tile, and heavier metals.

Over at 153 S. Jefferson, Bernardo|Wills Architects has invested in virtual and augmented reality as one of its methods to communicate projects to clients.

Dillon Reese, BIM and CAD technician, says developments in architectural visualization have grown exponentially, which he also attributes to the gaming industry.

It also saves time because things that wouldn’t have been as obvious in a 2D design, like spacing between a wall and tables for instance, are more noticeable in 3D and can be adjusted early in the process, he adds.

Goodmansen adds that when VR first launched, it was clunky, expensive, and not user-friendly, which led to its slow adoption in the industry. Since then, computer processing power has rapidly advanced to make VR easier to use and less expensive to own and operate. He adds that the firm is updating its staff’s computers to gaming laptops with high processing power to accommodate the new technology.

Legal issues are also behind the relatively slow adoption of drones, says Tschritter, who is the only employee at ALSC that holds a license to fly drones, though Dehal notes that another employee is in the process of obtaining a license.

Commercial drones are overseen by the Federal Aviation Administration, and operators must follow many of the same rules that apply to airplane pilots, Tschritter says.

ALSC purchased its first drone at the end of 2018, and Tschritter obtained his license earlier this year. ALSC has only used the drone for a few projects, such as mapping Joe Albi Stadium, in northwest Spokane, and the Ridgeline High School project site near Liberty Lake.

The drone can take hundreds of images and video, which it can then process through software into a detailed rendering of the project on the site, Tschritter says.

Dehal adds the image then can be superimposed onto a Google Map image to provide context for clients. It can also measure the site, which expedites the surveying process for engineers.

“Every team is starting to understand we’ve got this technology in the office and this is how you use it,” Dehal says. “Just as with any new technology you integrate, it takes time to figure out how do you deploy it, how do you use it.”

Goodmansen, of Bernardo|Wills, says the latest buzzword in the industry is iterative designs, in which a computer generates hundreds of design iterations of a project that an architect will then whittle down to a few useful ones.

“It’s one of those things that have a lot of promise,” he says.

Mike Stanicar, associate principal of Bernardo|Wills, adds that regardless of how many designs a computer can generate, the human element can’t be replaced, noting that it takes an architect to determine whether a design is workable and to input the parameters of the project itself.

With the rapid advancement of technology, architects say the ideas that were once relegated to science-fiction seem less absurd.

“I’m hesitant to even try to pull out a crystal ball,” says Potratz, of Integrus, though he says the potential for 3D printing full buildings and viewing project plans in goggle-free VR from a Star Trek-like holodeck are ideas that seem like fantasy, but could become possible.

Dehal adds, “Technology is one of those things that if you dream it, it’ll probably happen,” agreeing that immersive holograms are likely in the industry’s future.

Despite the technological possibilities, Stanicar says a pencil and a piece of paper remain useful tools at Bernardo|Wills, a sentiment Collins of Uptic Studios agrees with.

Collins adds architects should never forget the usefulness of working a model with their hands to flesh out ideas.

“As designers and creators, we want to be the ones steering the ship. Otherwise, we become expendable,” Collins says.