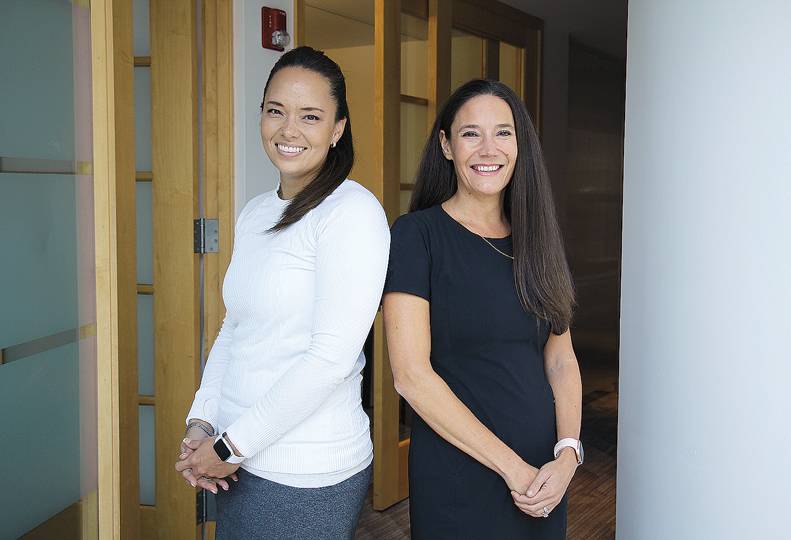 -Virginia Thomas
Amy Nichols, left, and Sarah Clifford are dividing duties while taking the helm at Seven2 as the company’s founders step back from day-to-day operations.

Sarah Clifford and Amy Nichols were promoted in July to presidents of Spokane-based digital media company Seven27 LLC, which does business as Seven2.

For nearly nine years, Clifford has worked at the creative company, which develops games and creates websites, advertising, and social media. Nichols has been with the company for about two years, following about 15 years at various media companies in the Spokane area. They’ll oversee a staff that currently numbers 32 but is growing as the company works to fill several vacant positions.

The Journal sat down with Clifford and Nichols to discuss their paths through Seven2, the importance of company culture, and how they’re sharing duties.

How did each of you come to Seven2?

Nichols: I started in advertising about 20 years ago at a different agency that had, at one point, over 100 people. I started out as a traffic coordinator back in the days when you would get a sheet of paper for the task and run around the whole agency. I got a lot of exercise every day.

I made my way through account services, first as account coordinator and then account executive. I’ve been at multiple agencies. My goal was always to be at Seven2. My husband works at Seven2 and has been here for 16 years. I’ve always admired Seven2 from afar, but knowing the people, too, the culture was always a big draw for me.

Clifford: I was living in New York years ago, and I was a TV producer there. I worked in TV for some major networks. I met my husband. He’s from Spokane, and we’d been doing the long-distance thing. I ended up moving to Spokane to be with him, knowing when I was moving here that the type of work that I was doing in New York didn’t exist in Spokane. I was working more in long-form documentary feature types of TV shows. I had to do a little bit of a career shift and figure out what my next step was going to be.

I started Googling and looking up companies that were in Spokane, and Seven2 was one of them. I kept my eye on it throughout the years, waiting for an opening that seemed like something I could do.

Part of the reason I was drawn to it was because the national clients that they had aligned with what I was working on in New York. I had never been in advertising, so I didn’t know if I was going to be qualified to work at Seven2, just because I didn’t know much about the advertising world.

I went into more of a director of marketing role at (another Spokane company), and then an opening popped up. A friend of mine who still works here had posted on Facebook, come work with me at Seven2. A few interviews later, I got hired as an account manager, which then changed to producer and project manager. I did that for about four years, and then they asked me to be more on the client-relations and business-development side of things—focusing on bringing in new clients and growing accounts. I did that for four years, and now, here we are.

How did you come to share the role of president?

Nichols: Nick and Tyler are very busy people. They’ve come to realize that their focus has been split amongst a lot of their businesses and interests. They knew that they were going to be searching for a president. Through the course of working with both of us over the years, they came to realize that they wanted to promote from within.

To them, Sarah and I were the ones who rose to the top, as far as leadership qualities. They like the idea of having two people, versus one person. … It’s been a great relationship and a great way for them to manage the company, as founders.

They saw that opportunity with us because Sarah and I have different focuses. Sarah’s focus is more on the accounts side, and I’m more on the operational side. That’s what I’ve been doing for the last couple of years, so that balance made sense with the both of us.

Clifford: This just ended up being good timing for them. Tyler wrote a book and is working on some new businesses and adventures, and so is Nick. They realized that without them being in the weeds here every day, it made sense to keep it within the family, basically, and with two people who are very much in the weeds every day and who care about the company.

They would tell us multiple times, this is our baby, we wouldn’t just hand it over to anybody. We trust the two of you, and we like the different qualities that you both bring to this role. It just made sense to them.

For them to let go a little bit—they’ll still be involved in a board of directors’ type of role—was a big change. They realized that if they brought somebody in from the outside, it would affect the company’s culture.

Nichols: What I like about the culture at Seven2 is that the culture is important to Seven2. Seven2 was always the epitome of work culture for me because the people here are very talented, and there’s a friendship that exists among them. Not that it’s a requirement, but people hang out outside of work and are friends. That’s one thing that keeps people coming back—a strong focus on culture.

Clifford: It’s all about trust. One of the reasons we have such strong internal relationships is because we all trust each other. Maybe one person is working late on Slack and somebody happens to see that, and they’ll just ping to say, can I help in any way? Even if they’re not on the same project. That’s where the friendship and trust come in. Everybody has each other’s back.

It’s the same way for our clients. They truly feel like Seven2 has their best interests at heart, so when they say, we have this massive project and the deadline is in two weeks, can you get it done? A lot of agencies will take the sale and say, yes, we can get it done. We look at it, analyze it—maybe we can’t do this, but here’s what we can do in two weeks. They know they can come to us and trust us, that we’re not just going to say yes to everything. A lot of that is based on relationships we’ve cultivated over the years that stem from Nick and Tyler.

How are you dividing presidential duties?

Nichols: I’m more on the operation side, a little more on HR. I’m handling most of the resourcing internally. We’ll figure out our way and figure out the division of labor as we go, but we’ve been jumping right into recruitment and HR duties.

I see my role being a little more focused on the numbers, because I don’t know that Sarah will have time for that, as much as she’s focused on accounts, growing those accounts, and working with clients and producers.

Clifford: I’m taking on the accounts that I didn’t oversee, adding those accounts onto my plate, and working with our account managers to understand their work and their projects and what they have coming up. I’m looking at those accounts and clients, in general, and making sure that we’re putting out the best we possibly can, that the clients are happy, that our internal team is happy, and that things are growing within the accounts and running smoothly.

On the new business side, we’re still looking for the next new client we could bring in, whether that’s within a client that we already have, or a completely new client. Pre-pandemic, I was on the road most of the time, so I’ll probably be picking that back up again. We’ll see what happens with the delta variant.

What other challenges does Seven2 face?

Nichols: We’re working through the work-from-home, work-from-office question. As it’s been for over a year, we’re waiting to see what happens and the current state of affairs with COVID. We’re trying to be flexible to the needs of employees right now. Things are going well, as far as people working remotely.

Clifford: The challenge of that is maintaining the culture when we’re all out of the office and trying to be creative about cultivating a culture on Zoom. That was hard for a little bit. People are more open now. A lot of people come in voluntarily, because they’re sick of being in the house.

Amy and I aren’t in here 24/7, either. That flexibility ties into the hiring part of it, because you have to be open, at this point, to remote work. When you’re trying to find good talent and creatives that have now gotten used to working remotely for a year and a half, being flexible on that is important.