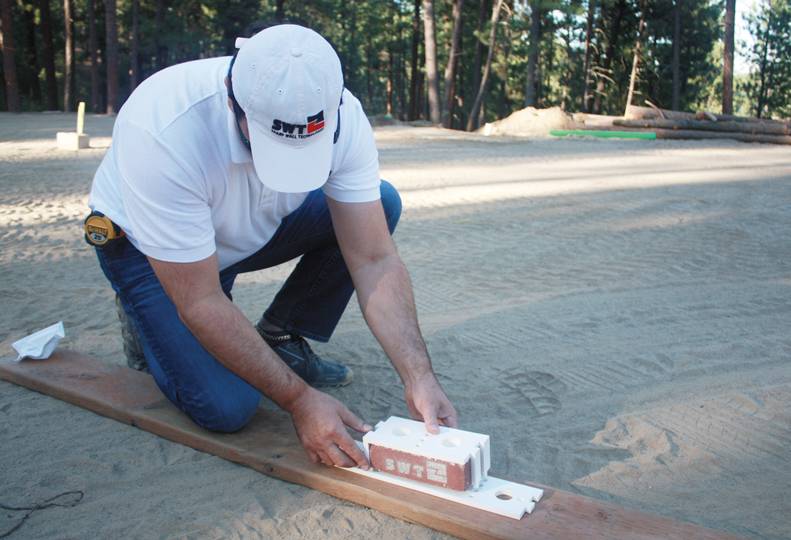 -Craig Howard
Lazaro Martinez, owner of Sharp Wall Technologies LLC, shows how the technology he developed works on the site of a home construction project near Liberty Lake.

These days, Lazaro Martinez and his novel approach to construction can be found on a bluff in east Liberty Lake.

Using products developed by his young company, Sharp Wall Technologies LLC, Martinez is building a home for his family using nontraditional materials and techniques. On the elevated plot that provides expansive views into North Idaho forests, plastic replaces mortar, and puzzle-like pieces click into place, forming the framework for a home that will cover 1,800 square feet in its initial phase.

“We designed and patented a unique, symmetrical interlocking technology that replaces the need to use mortar to assemble a block wall or any other block structure,” he says. “We use real concrete or glass blocks and engineered joints to create an array of structures simply and effectively, including interior and exterior walls, columns, fences, tables, stools, and benches. We make it possible for anyone to conceptualize any structure and make it a reality.”

While Martinez doesn’t shy away from comparisons to Legos, there are no interlocking toy bricks on site. Instead, boxes of ASA and ABS polymer parts referred to as “layout units” and “joints” await, ready to encase concrete blocks and bricks, one by one, forming a cross-hatched grid from the dust. When finished, the foundation and walls will have a familiar look despite an unconventional skeleton.

Martinez says he designed the technology for a range of builders with varying skill sets, including professionals, do-it-yourselfers, organizations, communities, and nations.

“It enables you to have a level of quality and durability that you normally wouldn’t have,” he says.

Based in Liberty Lake, Sharp Wall currently has two employees—Martinez and his wife, Niurka, who handles marketing and distribution in Miami and Central Florida. Martinez said the company has been generating income since last year and is currently profitable. One source of revenue involves selling its patent to global manufacturers, like SEVES Glass Block.

A native of Cuba who has called the U.S. home since 2004, Martinez came up with the idea for his pioneering method while living in Miami. Faced with the challenge of converting a garage into a bedroom, he wound up with a large gap that would require a 4-foot brick wall.

“I did it myself, and it was an absolute disaster,” Martinez recalls. “It took a week, and it was sloppy. I realized I had to figure out a better way. I thought it would be awesome if there were an interlocking system to install bricks where you could complete the work with the quality of a master mason.”

A software engineer by trade, Martinez got to work, using computer-assisted design software and purchasing a 3-D printer. The first interlocking units took shape in his garage. He funded the project with money from his software company, IS Horizons LLC, which owns and licenses LienSys, a web-based, online software suite created for the municipal lien search and real estate industry that runs on the Microsoft Azure platform.

Martinez owns the molds that churn out his signature product. Parts are made in Florida to save costs while Central Pre-Mix has been recruited as a local supplier of concrete bricks and blocks. Recycled plastic can also be used in the process.

Martinez is braced for the skeptics.

“I’ve had reactions in the entire spectrum,” he says. “There are people who like the technology a lot and appreciate the ease of it. Others have said it’s not strong enough, that the brick and mortar solution is stronger.”

While master masons may cringe, Martinez says the process can reduce project costs for the DIY community by as much as 30% to 40% while speeding up the production timeline. He also has an answer to the stability question.

In addition, he claims recent lab tests have shown that the supportive function of the joints increases the overall strength.

Martinez points out that reinforcing the framework with rebar is an option he will include in his own home that will span 2,800 square feet when all phases are completed.

On the commercial side, Century Mile Casino, in Edmonton, Alberta, incorporated the process with glass blocks in a building that opened last year. Martinez also has had discussions locally with Ian Robertson, the former pastor who has been a catalyst in the tiny homes movement through the Spokane-Valley-based Inland Northwest Fuller Center for Housing.

“One of my goals with this is affordable housing,” says Martinez. “I want to help.”

Martinez has developed a “pod” model that sleeps one and offers sturdy protection from the elements.

“It comes on a pallet that becomes the roof,” he says. “It only takes about an hour to make.”

With an inventor’s ambition and a marketer’s enthusiasm, Martinez is the face of an enterprise that formally incorporated in 2018.

Terry Brigman, who was a colleague of Martinez when both worked for the city of Lakeland, Florida, says “Laz has more energy than I could keep up with. From day one, he was just excellent at everything he did. When there was a problem to be solved, he was very fast to come up with ideas.”

Martinez transitioned from Lakeland to the Inland Northwest with his wife and family in 2019. His day job is with the city of Spokane as a member of the Innovation and Technology Services Department and Public Works, a role that taps into his innovative, high-tech expertise in areas like information technology, engineering, streets, and water and power generation.

Martinez says he has adjusted quickly to life in Spokane, even embracing the region’s rugged winters. He was part of Leadership Spokane’s 2020 class and has mentored computer science students at Gonzaga University.

Sam Rodell, the architect on Martinez’s house project, says the engineer turned inventor is onto something with his interlocking innovation.

“I think what Laz is potentially accomplishing is making higher-quality building wall assemblies more attainable for more people,” Rodell says, “which is a pretty heroic accomplishment.”