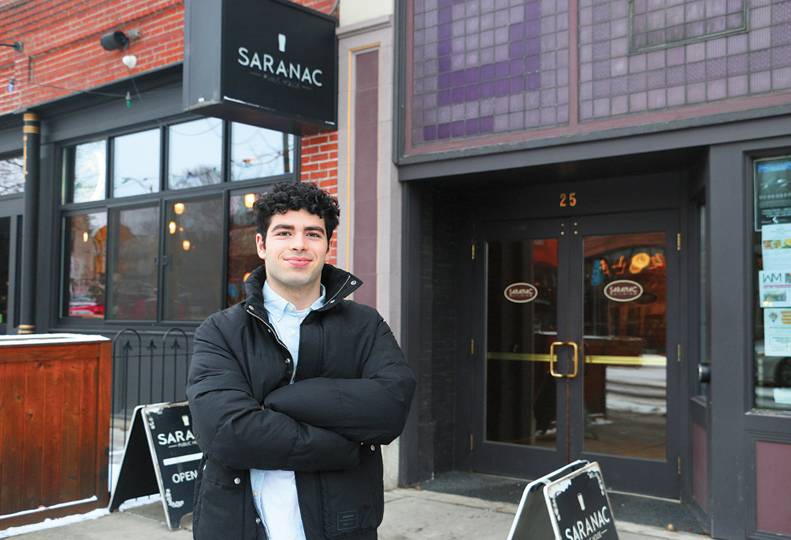 Food has always been a passion for Josh Hechtman, a senior at Lewis and Clark High School, in Spokane.

It was his interest in cooking and food that led Hechtman to start a food waste-reduction program during his sophomore year called ReProduce 81.

The program organizes food recovery during school lunches, educates students on food waste, and provides volunteer opportunities with hunger-relief organizations throughout Spokane. The program is now in its third year of operation, and Hechtman hopes to expand it.

“When I started, I wanted to find a way for students to reduce waste and hunger, but also learn and understand how food connects people,” says Hechtman. “Now, as I prepare to go to college, my goals are to grow our number of participating schools, and ensure the program is able to continue.”

Hechtman created ReProduce 81 with the help of a school counselor, who connected him with Nutrition Services of Spokane Schools to plan the program’s protocols and attain approval from the Spokane Regional Health District.

“We’d originally planned to donate to food banks, but soon realized it would be smarter and more personable to donate to students in the schools themselves,” he says. “The food that’s donated is limited to nonperishables, and fruits and vegetables with nonedible peels, so there’s no need for us to apply for variances.”

“The Smith-Barbieri Fund helped us to get started, but the biggest thing for us was partnering with the Spokane Edible Tree Project,” Hechtman says.

Spokane Edible Tree Project is a nonprofit that mobilizes community members and resources to provide equitable access to healthy food that would otherwise go to waste.

“Being a program under their organization enables us to apply for grant funding toward any materials needed, and in return, our students are able to participate in volunteering opportunities through their other programs,” Hechtman says. “They’ve been so helpful, and having their support gives me confidence that our program will remain sustainable.”

Hechtman estimates more than 80 students currently participate, most of whom attend Lewis & Clark.

Hechtman says students operate ReProduce 81, with purchases authorized by Spokane Edible Tree’s board. Each school offers the program to students as a club activity, with students participating in weekly meetings, donating food, and signing up for volunteer hours.

The program works by asking students to place food that would otherwise go to waste during lunchtime into a ReProduce 81 bin at each participating school. Donated food is sorted and logged by special-education students, then transported to the school’s academic success center, 2nd Harvest’s Bite-2-Go after school program, or food pantries.

“The food that’s donated can be anything in its original packaging that’s unopened, such as granola bars or chips, or fruits with nonedible peels,” Hechtman says. “Every school donates some food back to students in need. So, it’s truly students feeding students, which we feel is more impactful for our members than simply donating it.”

Hechtman says his goals at the start of 2018-2019 school year were for the program to have 11 participating schools, 12,000 pounds of food recovered, and 200 volunteer hours available per student.

“I was perhaps a bit overly optimistic,” he says. “Right now, we’re limited to working with just the high schools, as Nutrition Services is hesitant to involve middle or elementary schools due to allergy concerns. However, we have been meeting with more schools and partnering with 2nd Harvest’s Bite-2-Go program to try to increase participation.”

So far, the program has collected around 500 pounds, or about 280 meals, which Hechtman says equates to 250 pounds of carbon dioxide emissions.

“We track our progress using an online app called K-12 Food Rescue that logs the food items and converts that to the amount of waste reduced,” he says.

“It’s a vicious cycle, with food waste contributing to climate change, which then disrupts seasons and being able to grow foods, leading to more hunger,” he says. “Wasting food is common because people have so much of it that it doesn’t feel like a big deal. What we have to remember is there’s an equally large population out there that would be glad to have that same food.”

Hechtman says it’s important for students to see and understand the connection between food waste and environmental, social, economic, and political issues.

“When they’re able to see how these issues intersect, they’re able to be part of the solutions,” he says. “I really believe that if everyone does their part, hunger and food waste issues are solvable.”

One area in which ReProduce 81 has outpaced its goal is in its ability to provide students with volunteering opportunities.

“We’re able to offer 370 hours of volunteer opportunities available per student,” he says. “These include everything from logging food during lunch, to sorting food at 2nd Harvest, and serving meals at the House of Charity.”

He says students also volunteer at “Gleens” at Green Bluff, which picks leftover fruits and vegetables that aren’t able to be sold at the end of the growing season and donates them to area food banks.

While he’s happy with the program’s progress so far, Hechtman says he’d like to see the participation in ReProduce 81 expand to include every high school in Spokane.

“That’s an attainable goal because of how simple the program is for schools to adopt,” he asserts. “If we’re able to succeed here, one day this could become a statewide or even national program.”

Hechtman says his experience with ReProduce 81 has influenced him to study anthropology, public policy, and social entrepreneurship in college next fall.

He says he hopes more people will take steps to reduce their impact as awareness of food waste grows.

“Remember that small steps add up,” he says. “Eliminating food waste is a step toward both reducing the impact of climate change and allowing our students to get the food and nutrients they need to grow and succeed.”