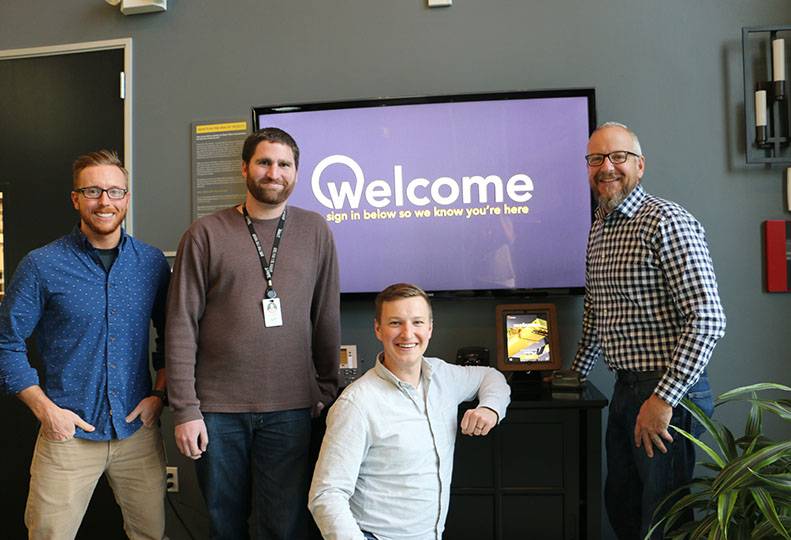 Telect Inc., the Liberty Lake-based developer and manufacturer of communications networking equipment, is investing in and leasing office space to a new company here named Weckey Inc., which has developed a mobile tablet guestbook application for businesses.

Telect, which employs about 80 people here and about 400 total with its operations in Plano, Texas, and Guadalajara, Mexico, is currently the sole corporate investor in Weckey (pronounced WECK-ee), Telect President and CEO Wayne Williams says. Weckey does, though, have the capability to take on other investors, Williams says.

Mitch Williams, who is Wayne Williams’ son and the CEO of Weckey, also is an individual investor in Weckey. Weckey has three employees counting Mitch Williams and is located in 300 square feet of leased office space within the 28,000-square-foot Telect building at 23321 E. Knox in Liberty Lake.

Weckey enables visitors and vendors to sign in at a business through an iPad application, Mitch Williams says. The program then notifies the person who the visitor is there to see, takes a picture of the visitor, and prints out a badge for them.

“In other words, instead of signing in with a pen and paper and relying on a receptionist to track down the person, the Weckey system does all that for you and frees up the receptionist to do other tasks,” Williams says.

Weckey is controlled by the client business through an administrator website, Williams says, which enables the client to add or remove employees from the employee directory as needed.

“A guest can then search through the directory (using Weckey) and find exactly who they’re there to meet,” Williams says.

Weckey could be used by a variety of businesses and organizations, such as schools and other education centers, he says.

“Public schools are responsible for keeping track of every single person who comes in and out of the building, such as parents and vendors,” he says. “We’re able to notify the teacher or administrator someone is there to see them.”

The application also could be used in medical and dental offices, many of which require sign-ins, Williams says, and it could be used in government buildings or other businesses that track visitors.

Weckey officially launched on July 1, he says, but it was getting feedback on the product through testers for a few months prior to that.

“We had seven locations testing the product,” Williams says. “That’s where we gained all our feedback.”

One of the company’s focuses now is building a stronger local presence, he says.

Weckey currently has three clients in the Spokane area; Spokane Valley Tech, Spokane Share Space, and Telect, Mitch Williams says. It also has clients in Portland, Ore., and in several areas of California.

Weckey is what’s known as a software-as-a-service, or SAAS, application, Williams says. It’s a monthly or yearly subscription-based service and can cost from $100 to $500 a month, depending on the size of the business, the number of locations, and the features the client wants.

Current Weckey client Spokane Share Space provides temporary work space for professionals on the third floor of the Seehorn-Lang building in Steam Plant Square, at 159 S. Lincoln downtown. People who use the space can pay a monthly fee for unlimited access or can buy a “punch card” that enables them to use the space five times in a three-month period.

Drew Repp, economic development coordinator for Greater Spokane Incorporated, which has been operating Spokane Share Space since April, says Weckey is used mainly at Share Space by the punch-card users, who check in with the application and have their card virtually “punched” by Repp.

“Since we can’t have someone there 40 hours a week, it allows us to track those punch-card users,” he says.

“When they have visitors sign in, or when general visitors come to the space and sign in, I get copied on that email, so I have a sense of who’s coming in and out over there,” he says.

The concept for Weckey first began within Telect as Wayne Williams’ idea.

“I like to create, but I have a lot of ideas that don’t fit within telecom,” he says. “The idea started here, and the beta was developed here.”

“They built a functional, but not ready-to-sell product,” he says. “It did what it needed to do for Telect, but it wasn’t going to be sold anywhere else. We built it up to be not just for Telect.”

After the initial development, Weckey was separated into its own corporation with Mitch Williams as the CEO. Williams left Liberty Lake mobile application and augmented reality developer Gravity Jack Inc. in March 2013, he says, after working there for about three years.

“After that, I was pursued by a couple other software companies, but I just decided I loved the Weckey product and decided someone needed to run with it,” he says. Williams hired his first employee, software developer Luke Hutyler, in September 2013 and the second, lead designer Chris King, in March.

Mitch Williams thought up the name for Weckey in the shower, he says; it’s a combination of the words “wireless”, “exchange”, and “key.”

The aim of Weckey isn’t to do away with traditional receptionists, Williams says, but rather to increase efficiency.

“If all a business has a receptionist there for is to sign people in and out, that’s a poor use of their money,” he says. “Our assumption is that they’re there to do more than that. Any time taken to sign people in is taken away from other tasks.”

Wayne Williams says the security aspect of Weckey is important to a company such as Telect. Because the company has operations in Mexico and imports and exports products, it’s subject to the Department of Homeland Security’s Customs-Trade Partnership Against Terrorism (C-TPAT) security criteria. Telect’s offices here all require badges to enter from the lobby, and now the company uses Weckey instead of a live receptionist in its lobby.

“All our employees are completely protected,” Wayne Williams says.

He also claims that Telect’s employee productivity has increased since it began using Weckey.

“If we shut down Weckey at Telect, it would drive the employee base crazy,” he says. “Before, it wouldn’t be uncommon for someone to wait at least five minutes for someone to find us and say ‘so-and-so is here to see you.’”

“In a regular setup, you can see who signed in before you,” he says. “Now the company owns that information.  Also with a paper guestbook, I would challenge anyone to say they go back and check it. They might keep it for a while and then shred it later.”

“Our API will connect to Active Directory, Office 365, and (Lightweight Directory Access Protocol) Systems,” he says. The program can also connect to a business using Google Apps.

Both men claim that Weckey was the first mobile tablet application with an admin website of its kind in the marketplace. Since then, competitors have started moving in, Wayne Williams says.

“Two other competitors have come in,” he says. “That’s validation that the market is there.”

Mitch Williams says the company currently is working on some new features and price points, including a theme-building feature to enable clients to customize the look of the application.

It’s also working on rolling out an analytics feature, so clients can track their sign-in data and see which days are the busiest or slowest.  Williams relates the feature to Google Analytics, which businesses use to track and analyze their web traffic, except for the physical world.

“So instead of just having the eyes on what people are looking at on the website, we’re able to provide similar types of data on people who come to the physical sites,” Williams says.

The analytics feature currently is in the feedback stage and should be released this month, Williams says.

He says Weckey’s short-term goals are to broaden its market and help businesses increase productivity.

“We’re looking for people who value that time that is wasted in a lobby,” he says. “We’re also looking for businesses who want to be early adopters.”

In the long term, Williams is hoping that Weckey will become synonymous with signing in at any office.

“We want to be the ubiquitous product on any lobby of any business or organization,” he says.