The (Big) Engie that could 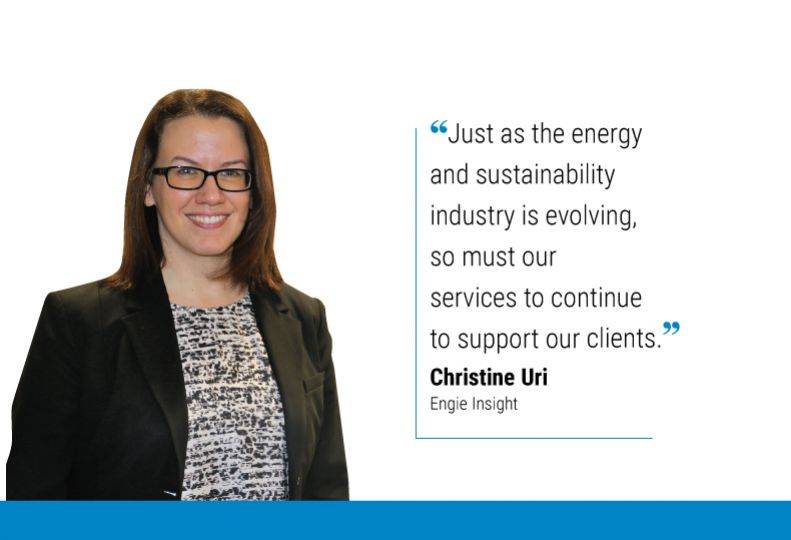 Energy and sustainability management service provider Engie Insight, formerly Ecova Inc., is ramping up the workforce at its Spokane office, which is at the center of a large technology upgrade for its French, multinational parent company Engie.

Company officials say this year, the company is balancing strong growth both locally and internationally, while also evolving to meet the needs of a changing industry.

Christine Uri, chief legal and human resources officer for Engie Insight, says the company has added about 170 new employees this year and currently employs just over 1,000 people in Spokane. Engie Insight’s offices here occupy a total of 113,382 square feet on the fourth and fifth floors of the five-story Rock Pointe Corporate Center at 1313 N Atlantic.

As of earlier this month, Engie Insight has 74 open positions and is expecting continued employment growth, Uri says.

“Spokane is growing, and there’s a lot of talented technology professionals moving here,” she says. “Our offices here have added a lot of both local and regional talent, and we hope to continue to do so.”

Earlier this year, the company was rebranded as Engie Insight from Ecova, a move that Uri says has brought it into closer alignment with its parent company.

“Our rebrand from Ecova to Engie Insight provided a great opportunity for us to start our strategy and focus on our core expense and data management and sustainability solutions for multisite businesses,” she says. “Our parent company’s mission of driving the energy and sustainability revolution using digital solutions directly mirror ours, and this rebrand was a big signal to the market on how our business was evolving.”

Decarbonization refers to efforts of businesses’ and governments to reduce carbon emissions and find more sustainable energy sources, she says. Decentralization, meanwhile, refers to a change in how energy is sourced, with more businesses and neighborhoods choosing to generate their own energy on site rather than pulling from a central grid. Digitalization, she says, refers to the changes in how data on energy use is collected, processed, and used to develop better sustainability programs.

“Changes in any one of those areas have the power to cause big shifts in the industry, but the convergence of all three at one time has generated a huge disruption,” she says. “We are evolving our strategy to address these changes, but also help our clients capitalize on the benefits they bring.”

While Engie Insight is working to accommodate changes in all three categories, Uri says one of its largest projects is the rebuilding of its energy and sustainability management platform.

She describes the energy and sustainability management platform as a comprehensive resource management tool that provides clients the ability to view and quickly gain insight into energy, carbon, water, waste, and telecom data from across multiple site locations.

“We’re working to rebuild that platform to include the latest, cutting edge technology to make it even easier for clients to view and accurately interpret that data,” she says. “This project is a multi-year, phased effort that we’re about a year and a half into now.”

Uri declines to disclose an estimated total cost for the rebuild project but said it should be nearing completion sometime in 2020.

Spokane Mayor David Condon says he met with an Engie executive over the summer and was excited to learn about the company’s plans to involve its Spokane offices in its effort to rebuild its energy and sustainability management platform.

“The idea that they’re focusing on Spokane and our talent to develop this next-generation platform is exciting,” he says. “It speaks volumes that an international company feels we have the level of talent in software and technology development to take on that project.”

He says companies like Engie play an important role in the community’s economic development.

“With economic development, our goal is to build upon the foundation we have in some of those key industries like life sciences, health care, ag, energy, and resources,” Condon says. “The energy sector continues to be one of those foundational industries for us, and it’s great that we have several international companies here like Engie that are focused on the future, helping us find ways to use power generation and other resources effectively, and to create new jobs in energy and technology.”

Engie Insight was founded in 1997 as WWP Energy Solutions, a spinoff of Avista Corp.’s electric and gas utility business. The company was renamed Avista Advantage, then Advantage IQ before becoming Ecova. Avista later sold the company to Engie, a French multinational energy business, in 2014.

In 2016, the Journal reported Ecova had expanded its operations to include European markets and planned further growth. Uri says that since that time, Engie has not only maintained its Spokane headquarters, but continues seek ways to grow its offices here.

“That expansion gave us access to international markets, so we now have both a local and a global touch,” she says. “As Engie Insight expands its focus and services to support our clients on a global level—either U.S. based companies with international locations or companies based other regions--we want to maintain our local Spokane office culture and community connection.”

Uri says Engie Insight was created from the need for multisite businesses to streamline their utility bill processing but has grown a lot since then.

“Just as the energy and sustainability industry is evolving, so must our services to continue to support our clients as their trusted advisers,” she says. “The next generation of our platform will allow Engie Insight to more effectively process and consume data, analyze that data to drive insights using advanced analytics (such as machine learning), and build new software-enabled services for clients.”

Uri says Engie has had significant growth both organically and through acquisitions over the last 20 years.

“This year, we did not have any acquisitions, but we did experience strong organic growth, adding employees and working to update our technology to accommodate ongoing changes in the energy and sustainability industry,” she says.

In addition to its offices in Spokane, Engie Insight also has offices in Seattle, Portland, Atlanta, Boston, Philadelphia, and St. Paul, Minn., as well as team members in the United Kingdom.

Engie Insight’s client base includes more than 900 multisite clients, and over 720 sites under management in North America. The company claims it has saved its clients an estimated $3.2 billion dollars in energy, waste, and water costs over the last five years.