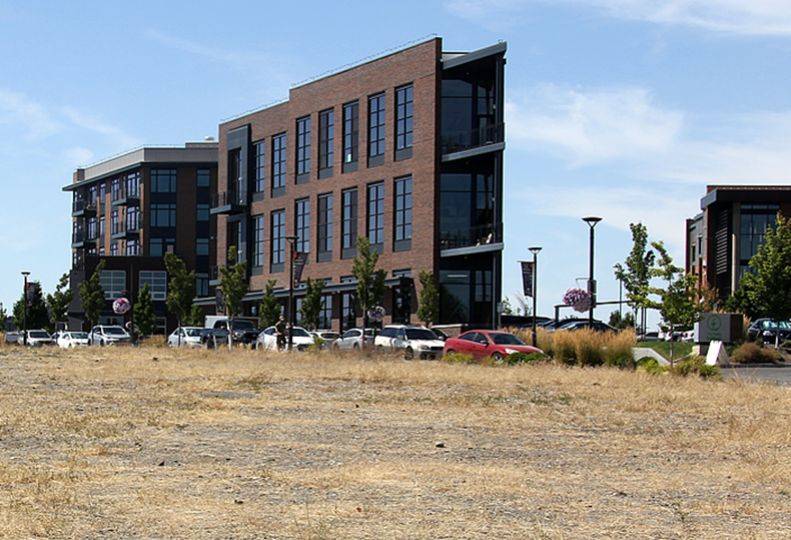 -—Erica Bullock
The southeast corner of the Kendall Yards site is the last portion being prepared for commercial development. 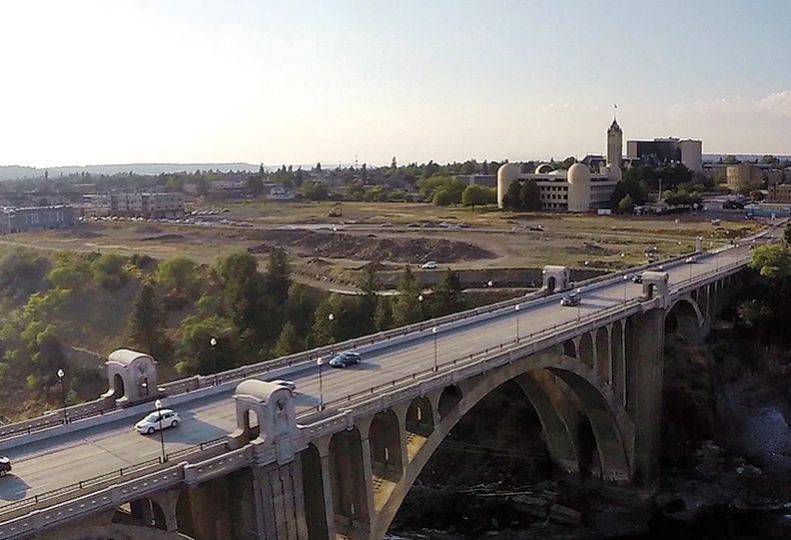 -—Erica Bullock
The Kendall Yards site was largely undeveloped in 2015.

In Kendall Yards, three new commercial projects are under consideration in the last chunk of undeveloped land in the business district.

Frank says all that’s left in the business district is about 5 acres between the Inlander building, at 1227 W. Summit Parkway, and the popular neighborhood’s easternmost boundary, Monroe Street.

“That 5 acres is going to be developed much more intensively than the other land was developed,” he says.

On a portion of the undeveloped land, Mountlake Terrace, Washington-based Premera Blue Cross has proposed a new office building that potentially will occupy up to 1.25 acres.

A notice of application announcing the development was posted recently at the site. The notice includes a request for public input regarding work proposed in proximity to the nearby shoreline.

Premera Blue Cross plans to use the building, to be located at the southwest corner of Summit Parkway and Monroe Street, to house its Spokane headquarters, says Amanda Lansford, strategic communications manager for the health insurance company.

Tami Palmquist, principal planner for the city of Spokane, says a decision likely will be made this month regarding the requested shoreline-development permit. She says the steep bank down to the river and the large difference in elevation between the river and the site make it so the proposed development isn’t in danger of encroaching on the Spokane River’s shoreline. The permit is required, however, because Premera’s plans include below-grade parking, and the grading work will fall within the shoreline jurisdiction.

The shoreline permit must be approved before a building permit application will be accepted, Palmquist adds.

Lansford says design plans for the Premera campus are still getting underway, so details such as the square footage, estimated construction costs, and construction timeline of the project aren’t finalized yet. She says a portion of the design features individual and collaborative workspaces, meeting rooms, dining spaces, areas with city views, and dedicated parking.

Moving Premera’s Spokane campus to Kendall Yards will allow the company to continue supporting its flexible workforce strategy as well, Lansford explains. The change in location also is expected to improve the work environment for employees who choose to commute to the office, she adds.

Frank says a structured parking area for Premera’s employees will be needed in the business district.

He says only surface parking has been provided in the commercial area of Kendall Yards, and with a denser development planned on the undeveloped land “everything that’s left will have structured parking.”

In the 15 acres of the developed business district, Frank says the buildings are one- and two-stories tall, but the remaining land will have taller buildings with four and five stories.

Premera had originally anticipated starting construction this fall, says Frank. Those plans, however, have been paused and will be revisited in 2023.

“Part of that delay is to get a better handle on their employees and how they’ll be phased back into the workplace,” he says.

With its move, Premera will join about 50 separate businesses within the Kendall Yards business district in a plan that closely resembles the original vision for the neighborhood, Frank says.

“If anything has changed in the business district … we’ll have a little higher ratio of residential to commercial uses, and some of that is due to changes in the market for office space,” he says.

Greenstone has been a longtime supporter of creating mixed-use developments, which is why the opportunity to develop Kendall Yards was pursued in the first place, he says.

“It’s the kind of development most homeowners and businesses wanted to see,” Frank says. “The desire for walkable, mixed-use communities is very high.”

The property was originally approved for Summit Properties, which was a development arm of Metropolitan Mortgage.

As previously reported in the Journal, Kendall Yards was first envisioned by Marshall Chesrown, a Coeur d’Alene developer, who purchased the property for $12.8 million through a U.S. Bankruptcy Court auction in 2004.

Frank says Chesrown’s plan was to have Kendall Yards face away from the existing West Central neighborhood, which caused a bit of controversy at the time.

“He had plans so that backyards would face Bridge Street,” and the community raised concerns about the property being able to successfully integrate into the existing neighborhood, Frank says.

Greenstone’s modifications called for the construction of houses on Bridge Street, facing the homes on the north side of the street, “so we weren’t turning our back to the neighborhood, but were facing our front door to the neighborhood.”

Another change expanded pedestrian access across Kendall Yards and into the Centennial Trail in an effort to ensure vehicles, bicycles, and pedestrians had strong connections to the West Central neighborhood.

Frank says the amenities in Kendall Yards also were planned for all members of the West Central community to use and enjoy, such as the Olmstead Brothers Green Park, which is a private association-owned park.

Outside of Premera’s project, Frank says a medical office building has been proposed on a part of the undeveloped land as well.

That project is currently on hold until the company behind the development decides how its workforce will operate in the future as well as future business needs, although Frank says he expects a decision will be made to move forward by the end of the year.

Plans also have paused for a residential structure at the site to allow time for construction costs to stabilize, Frank says, adding that the project will be reconsidered next year.

“It’s not entirely a cost issue,” he says of the development pause. “It’s the ability to maintain and manage quality control in an environment where subcontractors have been put under a lot of stress. We felt like it wasn’t worth fighting those circumstances in the market.”

“Even though the market is telling you to increase production, we’ve eased back so we don’t put our organization and our customers under that kind of stress.”

Strong demand for the business district’s vacant land has continued throughout the unpredictable market changes.

“We have enormous demand for the land, and we get requests weekly. But we’re not in any hurry to do anything or to sell land,” says Frank. “We’re just looking for the best opportunities so that when this is done, it matches the vision we had and also guarantees long-term success of the community.”