The Great PNW: After the amorous bears 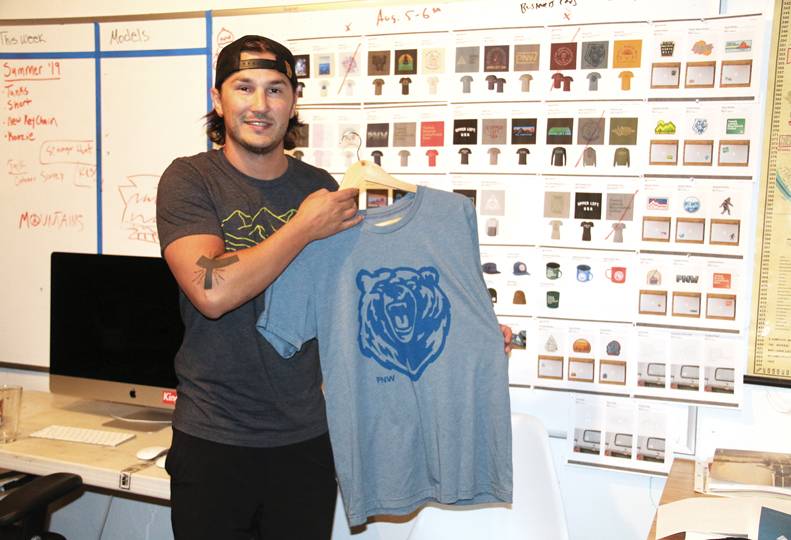 -—Virginia Thomas
The Great PNW owner Joel Barbour holds up a bear t-shirt of a different sort at the company’s facility in North Spokane. The apparel maker has three other employees currently.

Mention The Great PNW bears to the majority of Spokanites, and one image immediately comes clearly to mind.

That animated image, to innocent eyes, looks like one grown bear on his back haunches standing behind another that’s resting on all four paws. The typical adult, however, sees something much more intimate. Or just, perhaps, biological.

Days after the billboard went up and a social media firestorm ensued, Barbour decided to make a t-shirt featuring the two mating bears available for pre-order on the company’s website. Within a week, $20,000 worth of the shirt alone — about 2% of The Great PNW’s annual gross sales — had been pre-ordered.

Barbour says the increase in sales resulting from the bears billboard was “a blip,” but the six-year-old company has enjoyed steady success. The first year The Great PNW was in business, Barbour says the company made about $35,000 in gross sales; last year, gross sales totaled $1.2 million.

After two years of planning, Barbour says next month The Great PNW will move to an 8,000-square-foot new office and warehouse space the company built at 519 N. Sycamore from its current 2,200-square-foot location at 2808 N. Monroe.

The new building will have a gym, an indoor skateboarding area — all four employees skateboard, Barbour says — as well as a small outdoor dirt bike track.

“We have room to expand, to even triple the size of that building on the land that we bought,” Barbour says. “We won’t be going anywhere for a while.”

The Great PNW is also looking at a few potential locations for a retail store, Barbour says. He hopes to open a retail location within the next 12 months.

Barbour says the controversial billboard started with a time crunch and an adolescent sense of humor.

The Great PNW had designed a hat featuring an image of two animated bears that appeared to be mating. When billboard company Lamar Advertising Co. told Barbour they needed an image for a Spokane billboard The Great PNW had bought, Barbour didn’t have much time to put together a new ad.

“I was like ‘oh, this’ll be really funny. I don’t have time to design anything new, so let’s see if we can push this through,’” Barbour recalls.

Within 24 hours of appearing on a billboard at Washington Street and First Avenue in downtown Spokane on April 30, Lamar removed the amorous bears. But the ad was up long enough to cause a stir.

“We did get some heated emails,” Barbour says, but the response was overwhelmingly positive.

He says he knew the ad likely would be short-lived, but he hoped it would stir interest in the brand.

And that it did. Photos of the billboard spread across social media like wildfire, even after the image had been taken down. In response, TV stations and the Spokesman-Review newspaper reported stories about the billboard image and how quickly it was yanked.

The Great PNW had reserved the billboard for the entire month of May 2018, so until the company could send Lamar a different ad, the animals were replaced by The Great PNW’s mountain logo.

Shortly thereafter, the bears came back, this time standing apart from one another and joined by a cub.

“We followed up just to keep people talking,” Barbour says. “If too much time doesn’t go by, we can keep them engaged — not near to the level of the original, but you can still keep that hype going. So, we put up the billboard with the baby bear, because it’s just comical.”

Would he do it again?

“Oh, absolutely,” Barbour says. “I’ve been wracking my brain to figure out how to do it again.”

Rick Hosmer, partner and chief marketing officer at Spokane advertising agency Klündt|Hosmer, says ads like The Great PNW’s bears billboard are called “shockvertising.” He defines it as “the intentional use of something that is shocking or offensive in a way in order to generate talk, generate buzz, generate awareness” for a company, a product, or cause.

“For most of our corporate clients or businesses, we would never take that approach, because it’s just absolutely inappropriate for a health care organization or a university or a manufacturer,” Hosmer says.

For companies like The Great PNW, however, shockvertising can be an effective advertising tactic.

“Personally, I think that they nailed it,” Hosmer says. “When you think about the interest, the buzz, and social media talk, the follow-up in online and printed press about this billboard, it got way more people aware of and talking about The Great PNW than it would have otherwise.”

Hosmer says The Great PNW caters to a younger, edgier demographic. Rather than repulse that demographic, Hosmer says the ad campaign likely attracted them.

Ramsey Pruchnic is president of Spokane online marketing company Strategy Labs, which provides some marketing services for The Great PNW—though the company wasn’t involved in the bears ad. Pruchnic says companies of all sizes try to successfully launch viral ad campaigns, but such ads rarely achieve their purpose.

Pruchnic adds, “A lot of times, they’ll have something that works really well, they just don’t have the foresight to plan or to be agile enough to get the maximum exposure out of it.”

That agility was part of the success behind The Great PNW’s ad, he claims. Because the majority of The Great PNW’s marketing is digital, Pruchnic says it was easier to amplify through digital channels the buzz that the physical billboard ad had received.

“Using paid advertising can definitely help amplify that exposure, but it’s also just that right combination of the press picking it up, the right influential people sharing it, and combining that with paid advertising,” Pruchnic says.

Barbour says what surprised him the most about the experience was that a print ad’s impact could be measured digitally — the attention the ad received translated directly into online sales and social media engagement.

“We were able to show and measure how a print advertisement literally turned into sales,” Barbour says. “Traditionally, we’re only able to measure that digitally. We do a little bit of print advertising, but it’s mostly digital, because it’s super measurable.”

He adds, “I think the biggest takeaway is proving that print isn’t dead. Yes, everything is going digital. We will always spend the majority of our money on digital (ads), but there’s something intangible about print.”