The Pitch to Improve Avista Stadium 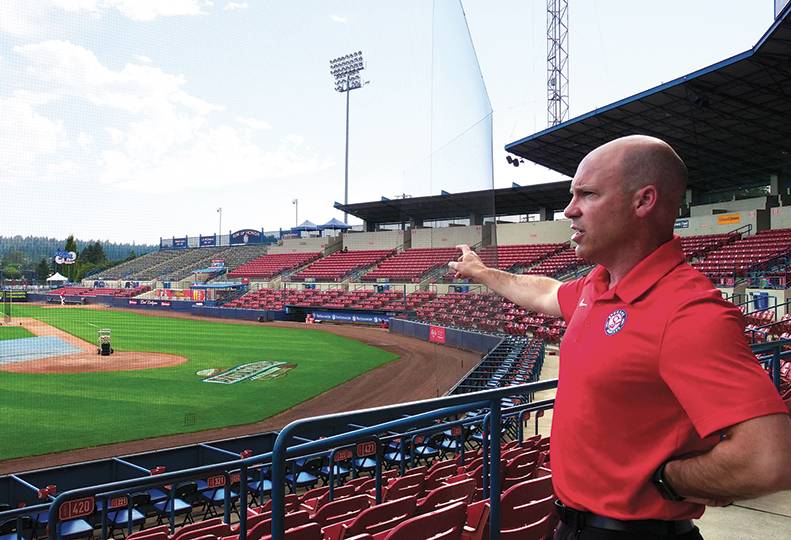 -—Karina Elias
Chris Duff, president of the Spokane Indians Baseball Club, looks over Avista Stadium, the team’s home, as its 2022 season comes to an end.

Already on course to miss upcoming stadium-improvement deadlines set by Major League Baseball, the Spokane Indians Baseball Club is hoping Spokane County steps up to the plate to participate in a private-public partnership to fund $22.8 million in facility upgrades.

At least one county commissioner, however, is concerned that the partnership skews too public and would like to see more private investment.

The Indians, who recently become a High-A league affiliate of the Colorado Rockies after years as a Low-A, short season club in the Texas Rangers farm system, is in the same position as many other minor league teams around the U.S. They must make a set list of improvements to their facilities or face losing their franchise.

As it now stands, the team doesn’t expect to make interim deadlines for some improvements required in the next two years, Duff says.

The team has asked Spokane County for an $11 million investment over the next two years.

Josh Kerns, Spokane County Commissioner, says he considers a 50% investment in MLB-mandated improvements to be a high ask.

“The plan right now looks like they are banking a whole lot on the taxpayers footing the bill for these renovations,” says Kerns. “I’d like to see the baseball team and private individuals who want to invest in the team bring more money to the table.”

County staff currently is assessing from where the $11 million investment would come, and he emphasizes that it wouldn’t come through any form of tax increases.

He adds that it’s his understanding, from conversations with team co-owner Andy Billig, that the organization plans to explore public financing options through Washington state.

“Whether it’s coming from city, county or state, that’s still all tax dollars,” he says.

Duff says the team is engaged in several positive conversations with both private and public partners, including the City of Spokane Valley, which have shown interest in investing into the stadium. However, none of the potential private partners are ready to announce a commitment.

“If we can get the county to take the first step as the stadium owner and show commitment to this, that will be the tool that the Indians need in order to get the remaining funding,” says Duff.

Duff says he anticipated changes to the minor league system but had no idea how extensive they would be.

“They said ‘Here is your license … as part of this 10-year agreement, you have this window of time to reach these stadium requirements,’” says Duff. “That was part of one fell swoop.”

After reviewing the new contract with MLB in 2020, Duff says the team began working with Spokane County and hired Spokane-based ALSC Architects to assess the current facility to determine whether the team should make renovations to the existing structure or search for a potential new facility.

Duff says that in terms of cost and location, the team felt the best route was to make renovations to the existing facility.

ALSC drafted a four-phase approach to get the team where it needs to be by 2025, says Duff. The first phase is comprised of renovations to elevate the stadium to long-season status, which begins in April. Improvements included weatherizing the facility’s buildings along with renovations to the field and creating proper drainage through an estimated $800,000 joint investment by the county and team.

The next three phases had been slated to meet the three major checkpoints the MLB has mandated for the starts of the seasons in each of the next three years. At least two of those deadlines likely won’t be met.

Before Opening Day 2023, Avista Stadium is required to have undergone about $7.8 million worth of renovations that involve constructing indoor batting cages, a renovated and larger home clubhouse, and a relocation of the Avista Stadium maintenance building, says Duff.

In addition, the team will need to play catch up on some first-phase items valued at $2.7 million that weren’t completed on time, such as new field lighting, adding a new video board, and retrofitting of the existing scoreboard.

“With the construction window in Spokane in winter, I doubt we are going to get funding, do the design, and go out to bid and be able to get the majority of that done prior to 2023,” he says. “But our goal is to get it done during calendar year 2023.”

Phase 3, which has an estimated cost of $7.4 million, includes renovation and expansion of the visiting team’s clubhouse, replacement and expansion of dugouts, and a full field renovation, according to the Avista Stadium master plan drafted by ALSC.

Duff says the team also likely won’t meet the 2024 deadline for Phase 3 and is focused on making the final 2025 deadline.

The $4.1 million final phase includes a 360-degree, outfield-elevated concourse, a new entrance gate at the southwest corner of the grounds, and relocating the administration to the Parks & Recreation building.

Duff says he has heard the MLB has a system of fines in place for missing facility-improvement deadlines, however he doesn’t know any details about the penalty system.

If the club is successful in working with the county and other community partners, it will approach MLB with its funding plans, show of community support, and its multiphase approach.

“We are hoping that we can build a case to show them we are working hard,” he says.

Duff says it is challenging at times to educate the public on why $22 million is needed, because from a fan’s perspective, the stadium doesn’t appear to need such improvements. However, most of the required renovations and improvements are about player health and wellness, which is behind the scenes, says Duff.

The Spokane Indians are not the only team that is asked to make improvements. Many other teams are in similar positions with some needing much larger investments.

For example, the Everett, Washington, AquaSox Baseball Club is exploring potential new facility sites with the intent of funding new facility development through a public-private partnership at costs estimated between $60 million and $80 million, says Duff.

The Modesto, California, Nuts, an affiliate of the Seattle Mariners, is working with the city of Modesto and private-sector partners to build a new downtown ballpark, dubbed the Great Valley Coliseum, with costs estimated between $85 million and $122 million, reports Ball Park Digest.

Kerns notes that total improvements required by MLB at Avista Stadium would be closer to $16 million if the team were to forgo a few fan amenities currently in the master plan.

In addition, he says he’d like to see the team pay more to the county than its current annual lease rate which stands at $24,500.

“We will and should pay more, in addition to contributing to the capital side and being the lead stakeholder and fundraiser,” says Duff.

In addition to the rent, the team commits hundreds of thousands of dollars a year in capital contributions, annual maintenance and upkeep, and overall management of the facility, notes Duff.

The team, which provides a $25 million annual economic impact in Spokane, employs 25 full-time, year-round employees, in addition to over 300 seasonal workers, and an internship program with about 12 people. Employee counts don’t include the team’s players and coaches, all of whom are paid by the Colorado Rockies.

The next meeting before the Spokane County Commissioners is slated for Monday, Sept. 12.

“We have something really special, and I want to make sure our community doesn’t miss out on this opportunity,” says Duff. “When it’s gone, it’s gone, as is everything that came with it.”