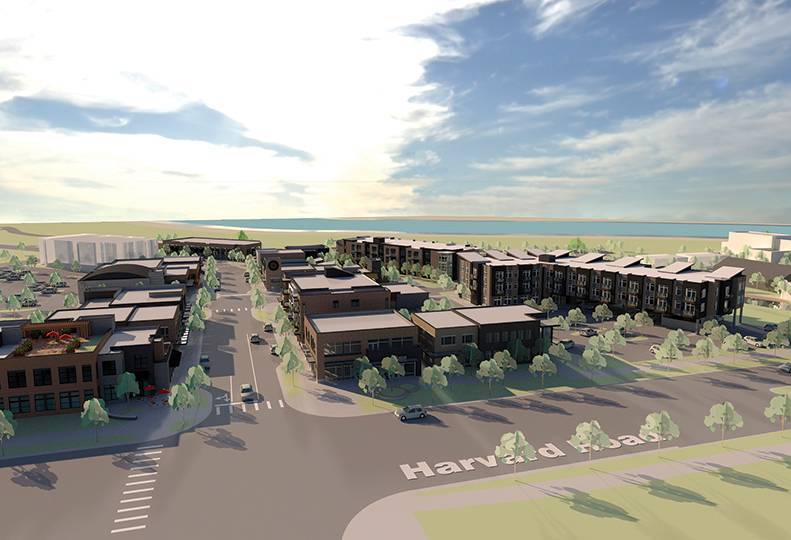 -Greenstone Corp.
The start of development of the $50 million NoLL mixed-use development in Liberty Lake ranks among the top business stories of 2022.

In the Inland Northwest, business news involved more highlights than lowlights in 2022, despite challenges nationally and globally.

During the year, the Journal reported on major projects coming out of the ground—some of which will be game changers for the community and make Spokane more competitive from an economic development standpoint. Iconic companies changed hands, as did a few popular properties. And in some cases, key personnel stepped down, and new leaders stepped in, though there was probably less of that activity than in recent years.

Here are the year’s top 20 business stories in the Inland Northwest, in chronological order:

Jan. 27: Liberty Mutual to reduce footprint: Liberty Mutual Insurance Corp. decided to reduce its footprint in the Meadowwood Technology Campus by about 100,000 square feet of space. Still leasing 60,000 square feet in the office park, the company was an early instance a trend of companies reevaluating office space needs as more employees continued working from home in the post-pandemic era.

Feb. 3: YMCA buys land for South Hill facility: YMCA of the Inland Northwest bought 15 acres of agricultural land in the Moran Prairie neighborhood in south Spokane. The organization plans to build a long-awaited South facility, which is expected to cost up to $40 million to build, after a multiyear capital campaign.

Feb. 24: Northtown Mall changes hands: New York-based Kohan Retail Investment Group acquired the Northtown Mall in a $49 million transaction. The 1 million-square-foot retail center on Spokane’s North Side had an 80% occupancy rate at the time, and the new owner had hopes of increasing that rate.

Feb. 24: Businesses form Hello For Good: A group of Spokane businesses formed Hello For Good as a coalition to attempt to reverse Spokane’s growing homeless population. The homelessness issue continued to be a hot-button issue throughout the year as the community struggled to develop and fund shelter space and provide services.

March 1: Boo Radley’s sold: Jen Menzer, a longtime employee of Boo Radley’s gift shop, bought a majority interest in the popular, quirky store in downtown Spokane from its founders, Andy and Kris Dinnison. The Dinnisons, who first opened the shop about 30 years ago, maintain a small ownership interest in the retail business.

March 24: Work starts on new stadium: Garco Construction Inc., with Halme Construction Inc., started groundwork for Spokane Public Schools’ new 5,000-seat stadium, which is going up just east of the Spokane Arena, north of downtown. According to the school district, the stadium, designed by ALSC Architects PS, is scheduled to be completed in the fall of 2023. Late in the year, the Journal reported the stadium project kickstarted real estate investment and development in the North Bank neighborhood.

April 29: Tampien buys Valley athletic facility: Spokane developer Jordan Tampien bought the Spokane Club’s Valley athletic center in a $4.4 million transaction. Tampien said at the time that he would continue to operate the facility as an athletic club, but he also planned to build an apartment complex on 6 acres at the 9-acre site.

June 2: HollisterStier plans additional expansion: Jubilant HollisterStier LLC disclosed plans to double its injectable-filling capacity at its East Spokane plant with a $193 million expansion. The new project was in addition to a $92 million addition announced in late 2021. The company said it plans to add up to 450 jobs at the facility in the coming years.

July 14: Condo high-rise project starts in Cd’A: Site work started for an envisioned 18-story, 60-unit condominium building in downtown Coeur d’Alene. With a permit value of $45 million, the project near McEuen Park is expected to take up to two years to complete.

Sept. 22: Rings & Things files for Chapter 7 liquidation: After 50 years in business, Spokane-based jewelry-parts wholesaler NJWS Inc., which did business as Rings & Things, filed for Chapter 7 liquidation. The company attributed the shutdown to technical issues, specifically a failure in its systems data that prohibited it from accessing customer orders and other data.

Nov. 2: L-P plans siding plant on West Plains: Louisiana-Pacific Corp. disclosed plans to construct a new siding manufacturing plant on the West Plains. The plant is envisioned on a 60-acre site—the precise location of which is yet to be disclosed—and likely will employ 60 people.