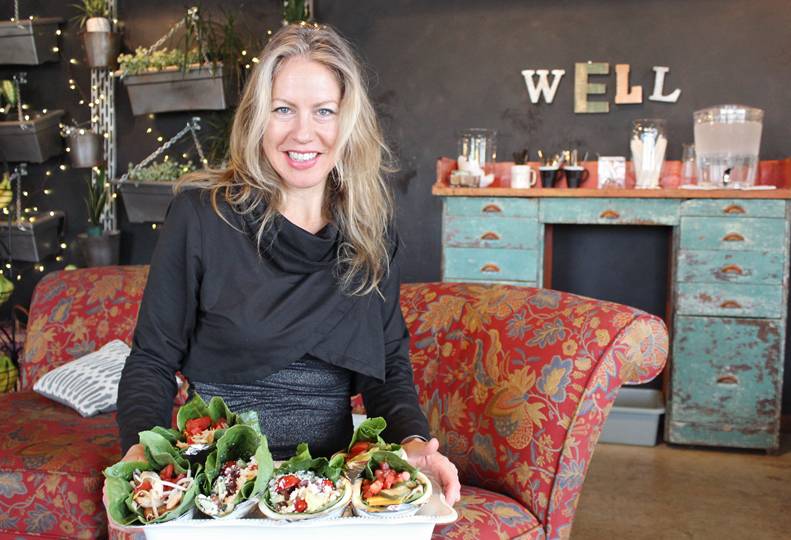 As an advocate of nutrition and wellness, yoga instructor Natalie Gauvin kept hearing an excuse when she spoke to groups.

People often told her they didn’t have the time to prepare nutrient-rich, natural-ingredient foods and beverages, or to get those types of meals from a restaurant. Gauvin believes otherwise, and she built that into a concept she’s dreamed about for 20 years: The Well in Liberty Lake.

The coffeehouse and café opened just over a year ago, at 21980 E. Country Vista Drive. Its name refers to wellness, and an approach to offer healthy menu items people can grab to go or sit down and eat while relaxing.

“Over the years of teaching yoga and nutrition, what I heard more than anything else from people is, ‘I travel and I work and it’s too hard,’” says Gauvin, 45. “It’s not the case.”

“You can go into a restaurant now and order what you want,” she adds. “Just about any restaurant now will accommodate. Restaurants don’t always set it up to have both a really good flavor and a really nutritional profile. Some do. I’m talking about the fast-food or quick grab-and-go places.”

The Well taps into nutritional foods that taste good, she says, along with coffee and other drinks, including the naturally fermented tea kombucha. The beverage goes back to ancient times and is low in sugar and good for digestion, according to Gauvin. It offers nutrients, electrolytes, and Vitamin B, she says.

Many of The Well’s products are organic and gluten free, with an intentional approach to use as little sugar as possible. The eatery makes products with a brown-rice flour produced by the Coeur d’Alene-based company Namaste.

Menu choices include Romaine lettuce-wrapped sandwiches, an example of cutting down carbohydrates. Among the more popular gourmet lettuce wraps are Thai Chicken and Shrimp Lettuce Wrap.

The Thai wrap’s peanut sauce is one of the few ingredients that the restaurant doesn’t make from scratch, but Gauvin hikes the nutrition by displacing half of that sauce with Adams Natural Peanut Butter. The eatery orders the large Romaine lettuce from Spokane-based Peirone Produce Co.

Gauvin developed the eatery’s nutrient-rich, gluten-free brownie and cookie products, both sold at the café. She also supplies the brownies and cookies on a wholesale basis to Yoke’s Fresh Market, at Argonne Village, in Spokane Valley, and the Yoke’s supermarket in Liberty Lake.

“For cookies and brownies, I cut sugar almost in half and add in blended fruits, like pears, apples, grapes, cantaloupe,” she says.

As a long-range plan, she would like to expand wholesale production and distribution of the cookie and brownie products, while adding a third product: The Well’s nutrition bar.

“We make a high-nutrient brownie and cookie using ingredients that no one else is using,” Gauvin says. “I’d like to take a few of my items and go Costco big.”

She adds, “I’d love to get an angel investor who believes in the product and find a facility in Idaho. If I open another Well, it will be in North Idaho.”

In Liberty Lake, other menu items include salads that are complex with healthy fats, some carbohydrates, “lots of phytonutrients from a plant,” grains, seeds, and nuts, she says. Some choices come with meat, and others are fully vegan.

In addition to operating the business, Gauvin teaches yoga at various locations, mainly at the Spokane Club, and The Mat, in Liberty Lake. She also recently has offered sessions through Kootenai County.

Gauvin has taught yoga for more than 10 years but has practiced movement and modern dance for over 20 years.

She moved to Liberty Lake in 2004 as a single mom from California and lived here “at poverty level,” she says. Today, she describes her life with her two middle school-aged children as one of contentment.

Another of her passions is to work with corporations and schools to talk about and teach wellness and yoga. She tells groups that yoga has ancient, tested concepts such as breath control.

“I do corporate work, teaching yoga,” Gauvin says. “That’s where my real passion lies. I like to go into worlds that might not have heard of yoga. I was in the veteran’s center, teaching vets and their families, so I was teaching people ages 15 to 85.”

She adds, “I love taking a group who may not have heard about the logical side of yoga before, about the wellness and the science of yoga. It’s new to them, yet it’s ancient. They’ve never heard of wellness attitudes that can go into your workplace and life and how easy it is.”

Her path toward healthier living has roots in her childhood and growing up among family members who had history of obesity and diabetes, she says, so she quietly taught herself dance movements.

Also with a do-it-yourself mindset, she did interior restoration work for The Well’s opening.

“This (The Well) is part of creating my tribe, from dancing to making healthy foods,” she says. “To me, it’s never ever been a problem. I don’t want a TV in every room, and I only need a car to take me from point A to point B. It’s just proof that everything is mentality and perspective. I volunteer and teach. I would teach yoga for free if I didn’t have to pay rent, because it helps you feel well.”

Gauvin has decorated The Well to create a cozy feel. It has a central space with hanging lamps, three couches, multiple tables and chairs, and overall tan and black colors. Materials came from items she found for free, nearly free, or at bargain rates. She’s collected some pieces over the years, such as chess sets, as part of her planning for the business.

She says the eatery’s four employees are more like work partners. Applying another approach that’s unusual, the eatery doesn’t offer any plastic utensils but instead gives people silverware to take and return, or “pay it forward” by giving it to someone else.

“I have actually saved more than $1,000 on plastic cutlery since opening,” Gauvin says. “Plus, it creates a sense of community and realization of how much plastic we throw out.”

The Well also strives to limit waste and avoid throwing food away. Gauvin supports reducing the amount of government rules and regulations that make it challenging for restaurant owners.

“I know what I’m doing in terms of food, and I do all my own shopping,” Gauvin says. “I’m doing it the right way, the nutritional way. This is the most challenging thing I’ve ever done because we have so much government regulation. We need to be trusted as business owners. If it’s a bad product, I won’t put it out.”

Gauvin says the business hasn’t reached profitability yet, but she has seen some growth in purchases and customers, and she expects to expand wholesale distribution.

“I’m sticking with it because there is growth in the business and growth demographically,” she says. “I think it will be viable, but it will never be hugely profitable. I’m happy and content.”