TidyHut looks to stir the pot in portable toilet field

TidyHut builds alternative it will market as cleaner 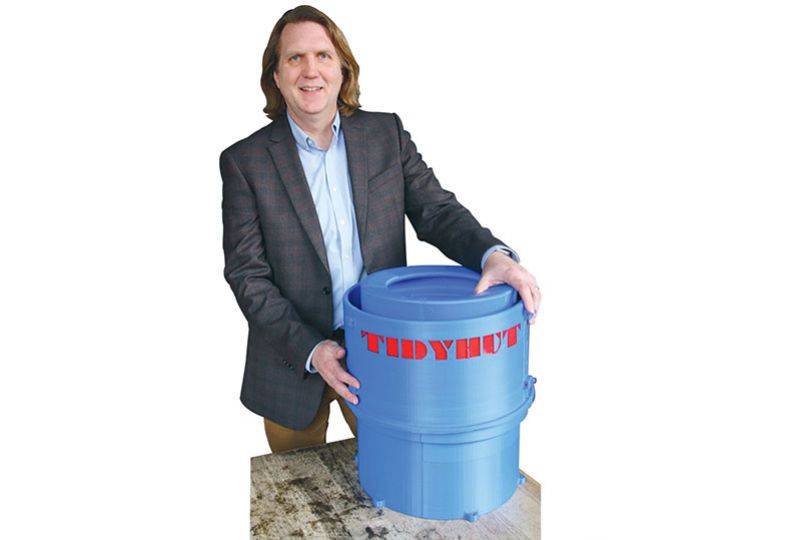 -—Kevin Blocker
Erik Nelson came up with the idea for TidyHut after a camping trip with his family during which they landed in a campground served only by portable toilets.

Erik Nelson can’t contain himself when he’s asked to discuss his “passion project.”

He’s been hard at work for the last couple of years as he prepares to try to enter a $2 billion industry. Nelson thinks his creation – the TidyHut – has the potential to revolutionize the portable toilet rental industry.

“Finally, a nondisgusting portable toilet,” reads the 53-year-old Nelson’s business card for TidyHut Inc., which is based out of his South Hill home.

Nelson’s design is still in the prototype phase, and he has yet to generate income with the venture. He’s funded the entire effort on his own and hasn’t solicited investment money.

“As soon as you take money, it’s off to the races,” he says. “I want to get this right the first time so that means taking my time.”

A little more than two years ago, Ignite Northwest selected Nelson and his TidyHut product to be among its fifth class of a half-dozen local startups with existing prototypes to help them enter the marketplace. Ignite Northwest was formed in 2015 to help young companies—many of which are technology based—overcome startup challenges.

Last year, he was contacted by maintenance officials at the University of Idaho, Geiger Correctional Facility, Garco Construction Inc., and Spokane Hoopfest, to name just a few, regarding his specially designed device, he says.

Nelson has secured a provisional patent for TidyHut and has another pending. Armed with a pair of 3D printers, he taught himself how to use Fusion 360 computer-aided design software and ultimately came up with his own design.

Nelson’s early prototype stands 8 feet high, is collapsible, can be carried by hand, and is outfitted with GPS.

He will soon begin work on a mobile app that will enable rental customers to track in real time how often the portable toilet is being used. An electronic sensor on the door measures entries and exits from a TidyHut.

The portable toilet industry considers a stall to be full after 240 uses, however, that typically isn’t actually tracked.

“With the app, a user could get an alert at 200 uses that it will soon be time to clean it out,” he says. “At the 240th use, the door will automatically lock and it can’t be used again until it’s cleaned.”

Nelson’s ultimate goal is to make a portable toilet with a “less disgusting experience,” he says. “In this technology age, why are we still using buckets for portable toilets?”

Similar to the original diaper genie, a continuous tubular biodegradable plastic wraps around the toilet seat and down into the basin. When the user is finished, upon opening the door to exit, a lever, connected to the door underneath the floor of the portable unit, pulls the used plastic into the storage basin while covering the rim with new plastic, Nelson says.

The portable toilet rental industry in the U.S. is a roughly $2 billion industry, according to IBIS World, an industry and market research firm based in Los Angeles.

Westborough, Mass.-based United Site Services generally is regarded as the leading provider of portable toilet rentals with more than 100 locations serving 115,000 customers in the U.S., says the company’s website.

“Based on my research, it appears as though they have 12% of the market share,” Nelson says. “The remainder of the industry is basically local, mom-and-pop companies with limited reach.”

To start, Nelson says he would charge daily rates that are in line with industry standards. Standard rates range between $175 to $225 per day depending on the length of time they’re needed, he says.

Nelson, now a Spokane resident of 20 years, grew up in Livermore, California, home of the Lawrence Livermore National Laboratory, a federal research facility originally designed to ensure the safety, security and reliability of the nation’s nuclear weapons through advanced science.

“When I grew up, I just assumed everyone had a Ph.D.,” he says. “I got an opportunity to be around people whose jobs were to create solutions to problems.”

Though much of his career was spent in the real estate and mortgage industries, it wasn’t until four years ago that a problem, as Nelson saw it, captivated his attention.

His wife, Colleen, suggested a family camping trip over a Fourth of July weekend with their then 17-year-old daughter, Reagan.

“Regan and I looked at each other and asked her, ‘Are you sure?’ Colleen is not an outdoors person,” he says.

When they arrived, the campgrounds with running water were at capacity. The Nelsons had to resort to a campsite where there were only portable toilets.

“Every time she had to go to the bathroom we drove to town,” he says. “She refused to use it (the portable toilet). After the fourth trip to town, I said, ‘That’s it, we’re going to a hotel.’’’

TidyHut emerged from that experience.

“I started talking to my half-marathon and marathon friends; they all said the same thing. Women will not sit down on them if they have to go during a race,” he says.

That’s when Nelson began to research the portable toilet industry, which largely started in the 1940s.

“The amazing part is the design really hasn’t changed; they’re still as disgusting today as they were then,” he says.