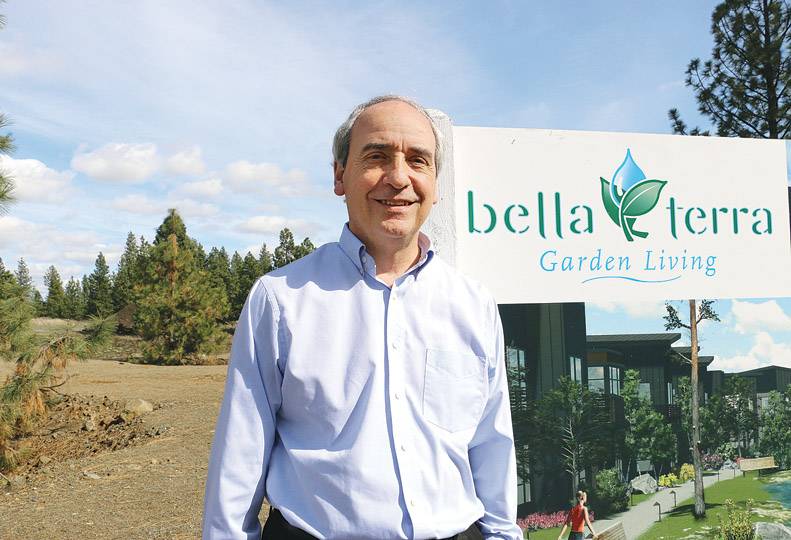 -—Katie Ross
Roger Fruci, project manager of the new Bella Terra development, says he was inspired by the Japanese garden at Manito Park. Construction of infrastructure for the project is expected to start in this summer. 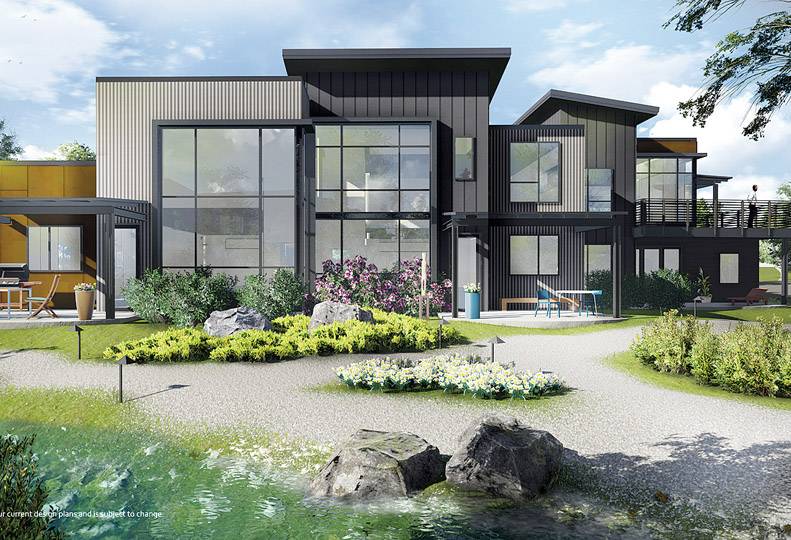 -—Architects West
The Bella Terra development took a different approach from most projects in that the landscape architect designed outdoor spaces first, then the building architect developed the home designs. The project is estimated to take a few years to develop fully.

Fruci says the cost of the entire project is still in the works, but he predicts the homes, once completed will have total sales values of $30 million to $40 million, with the average price of a townhome being about $450,000.

Bella Terra, which Fruci is developing through his company Light & Nature LLC, will feature 87 homes on 15 acres once completed, Fruci says. The development is bounded by Havana Street between 23rd and 24th Avenues, and extends east to the cliffs overlooking the Glenrose Prairie.

The first phase of the project will involve building the development’s extensive gardens and 36 townhomes, Fruci says. He estimates the overall project will take three phases to complete.

Work on infrastructure, including sewer, water, and road work, will begin this summer, Fruci says.

“Next year, we’ll build the units for phase one,” he says.

Bella Terra’s 500-feet-by-120-feet central garden will have ponds, waterfalls, flowers, trees, and food plants and herbs, Fruci says. All the townhomes will be positioned to give residents maximum exposure to the garden, he says.

There isn’t a firm timeline for completion of the entire project yet, but Fruci estimates it’ll take a few years.

“It’ll depend on how quickly everything sells,” he says.

Fruci says that he took a slightly different approach to developing the property.

“The landscape architecture was done first, then the (building) architecture, to make sure all the homes have a really good view of the garden,” he says.

Ancon Construction Inc., of Spokane, is the contractor on the project, Fruci says. The company was set up by longtime contractor Dave Andersen specifically for the Bella Terra project, he says.

The gardens and natural setting are two of the key features at Bella Terra, Fruci says.

“One of the things from a development standpoint is that people like to live in nature,” he says. “In Spokane, the way you (live) in nature is you buy acreage, which creates sprawl.”

By having multiple homes within the same natural area, residents can get the mental and emotional benefits of a natural setting while remaining close to the city and its amenities, Fruci says.

“When people go into acreage, what they want is elbow room,” Fruci says. “So I call Bella Terra ‘virtual elbow room.’”

Rural land typically is chopped up into 10-acre parcels for purchase, Fruci says. Building the same number of homes on acreage as Bella Terra occupies would take 58 times the land, he says.

Fruci says the units also are designed to be energy efficient. He says the estimated total energy bills for the homes should be between $80 for the smallest and up to $154 for the largest, three-story unit.

The next largest unit will be the one- or two-bedroom Walden, Fruci says, and will be one or two stories with a loft. The loft acts as an extra bedroom, and the units will have either two or two-and-a-half baths. They will range in size from about 1,400 square feet to about 2,300 square feet, and will run $410,000 to $505,000.

Lastly, the largest homes at Bella Terra will be the two-or-three story Emerson units. The Emerson can have two to four bedrooms and two-and-a-half to three-and-a-half baths. The homes will range in size from 2,200 square feet to about 3,400 square feet, and will be priced at $480,000 to $555,000.

The units all will come with two- car garages, Fruci says, which is not included in the square footage of the home. The Emerson model also has an option for a three-car garage.

One of the unique aspects of the Bella Terra homes, Fruci says, is that most of them have main-floor living.

The Emerson model contains what Fruci refers to as a “home within a home” on the main level, which can function as an in-law suite or guest home. Also, homeowners who want to age within the unit could move down to the main level as needed.

The homes also don’t share any common walls, Fruci says; even the terraces don’t face each other.

“On the side terraces, no one is looking directly at you,” he says. “There’s community if you want it and privacy if you don’t seek the community.”

The development also will feature a rock privacy wall, which will run 300 feet along Havana on the west side of the community, Fruci says. On the outside, the wall will have some hanging plants and lighting fixtures, he says. More hanging plants and food plants, such as tomatoes, grapes, and cucumbers, will be on the inside of the wall, he says. The top of the wall also will be a planter.

“It’ll look like an ornamental garden, not a vegetable garden,” Fruci says.

Along with its gardens, Bella Terra also will have more than a mile of paved pathways, Fruci says.

Fruci says he was inspired by the Nishinomiya Tsutakawa Japanese Garden here, which is part of Manito Park.

Fruci also was motivated by what’s known as healing gardens, which often are a part of hospitals and other health centers. Studies have shown that natural settings can promote healing and wellness, Fruci says.

“Part of my motivation was to try and give people a place to live that has that effect,” he says.

Fruci was previously with longtime Spokane accounting firm Fruci & Associates for 30 years. He left the firm to focus on real estate development full-time, he says, and he remains  part-owner of the firm’s two downtown buildings.