Townhomes are being developed in downtown Coeur d’Alene

Living units valued at $7 million-plus in the works 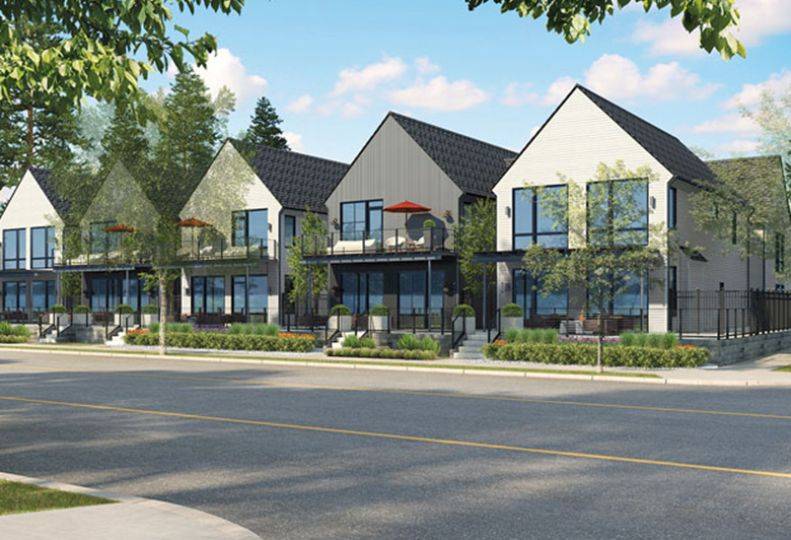 -—Eric Hedlund Design LLC
The first townhome unit is expected to be completed in November, with others coming on line in the subsequent months.

The 10 townhomes, each with roughly 2,000 square feet of floor space, are planned for the intersection of Ninth Street and Sherman Avenue—five homes are under construction on the northwest corner, and five more are planned on the northeast corner, says Hedlund.

Chad Oakland, partner with Coeur d’Alene-based Miller Development Group LLC, which is developing the project, says the 10 townhomes are two separate projects, known as Sherman 5 West and Sherman 5 East for the northwest and northeast units, respectively. Each project is valued between $3.5 million to $4 million, says Oakland.

Hedlund says the homes will be connected in the back, but from the front they are designed to look like single-family residences. Each consists of two stories and a garage, and each unit has a separate, 550-square-foot bunkhouse.

Construction on the first unit is expected to be finished in November, and the plan is to complete one unit a month for each month thereafter until all 10 are built out.

Stach Construction Co., of Coeur d’Alene, is the contractor.

Oakland says Miller Development chose to erect those units because “we felt there was a need for them.”

Coeur d’Alene’s “downtown is probably one of the hottest markets around,” he says.

The first five townhomes have already been sold, and Miller Development Group hasn’t started marketing the second five, he says. The townhomes are geared toward the $625,000-to-$700,000 price range.

Developers originally planned to only build the Sherman 5 West project, but Bill Wendlandt, the owner of the Blackwell Hotel, liked the project idea and sold the northeast parcel for more townhomes, says Oakland.

Blackwell Hotel, a boutique hotel and event venue, features 10 rooms and hosts a variety of events, including weddings, corporate retreats, and other gatherings, the hotel’s website says. Wendlandt purchased the building in 2011 and turned it into a hotel.