Staffing company hit by labor shortage here like others in industry 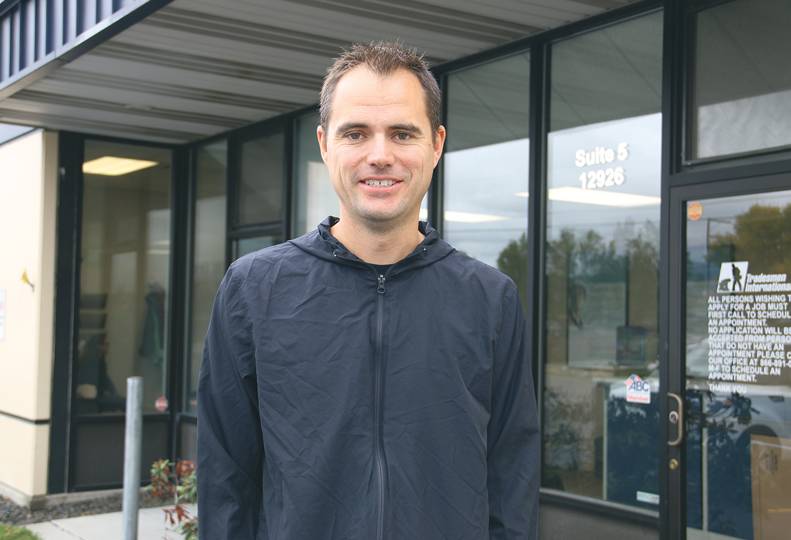 -Virginia Thomas
Trevor Harkema, general manager of the Spokane Valley office of Tradesmen International, says the company provides workers to about 150 construction companies in the region.

The Spokane Valley office of national construction staffing company Tradesmen International LLC has been providing workers to about 150 Spokane-area companies for more than a decade, general manager Trevor Harkema says.

Harkema, who works at the Spokane Valley office, at 12926 E. Indiana, has been with the Macedonia, Ohio-based company since 2015. The office here was established in 2009, 17 years after the first Tradesmen International location opened in northeast Ohio.

"I like to explain it as, we're a construction company. We just don't bid on any jobs," Harkema says.

The company contracts with subcontractors and general contractors to provide skilled labor in trades such as electrical, plumbing, and carpentry. Harkema says Tradesmen covers payroll and benefits, as well as workers' compensation.

"If someone gets hurt, the contractor is not responsible and they don't feel any of the impacts of it, we absorb all of that," Harkema says.

Contractors are billed a quoted hourly rate. The hourly rate depends on the trade, skill level of the worker, and other factors. Harkema says the billing includes a service fee.

Harkema says Tradesmen International is different from other staffing companies in that workers are often involved in long-term projects.

"The stigma for a lot of staffing companies is that it's day labor," Harkema says. "We have people who go out on projects for six months to a year."

In addition to Harkema, the Valley office of Tradesmen International has three employees who serve the Spokane and Tri-Cities areas. About 25 companies are currently under contract with his office, Harkema says.

"That fluctuates, with companies using more or less labor. It's project-based," he says. "Throughout the year, I'd say we have 150 companies in the area that use us to staff their jobs."

Currently, about 70 workers have been placed at Spokane-area jobsites through Tradesmen International, Harkema says. That's down from about 100 workers in 2019.

Like others in the industry, Tradesmen International experienced a rocky year in 2020. Harkema says he's not sure what the average number of workers was last year.

"It dropped immediately when everything first started. No one knew what was going on, construction was in limbo," Harkema says. "Last year was interesting. We did okay for what it was."

Worker availability and pay have changed significantly in the past few years, he claims; pay has increased, while the number of active workers has decreased significantly.

"When I first started, wages were so much different," Harkema says. "The opportunity now is so much better than it was before."

Recruiting and retaining workers has been more of a challenge than in previous years, he says.

"It seems very hard to get people to want to go to work," Harkema says. "Obviously, the world has changed in a lot of ways."

Lack of interest in the trades from young people is part of the problem, he contends. The COVID-19 pandemic also drove some workers out of the trades.

"COVID pushed a couple of people out to retirement sooner," Harkema asserts. "Even if they'd stayed in the rhythm of work, they probably only would have worked a couple more years."

Harkema says arranging for contracts, or orders, has become a more stressful prospect.

"Right now, it's almost scary to even pick up the phone to get an order," he says.

Nearly every potential employer Harkema's team talks with can use a Tradesmen International worker, he says, but he often has to delay placing a worker due to lack of worker availability.

Harkema says it's possible demand will rise if the trades don't experience the typical winter slowdown this year as manufacturers catch up with materials shortages.

"I'm curious to see what happens, with what we've experienced with material shortages and things of that nature," Harkema says. "I know people are behind, people have to get this stuff done, and now they're finally getting their materials."

Tradesmen International has almost 200 offices throughout the U.S. The company is affiliated with a number of industry organizations, including Associated Builders & Contractors Inc., Master Builders Association, and American Subcontractors Association.