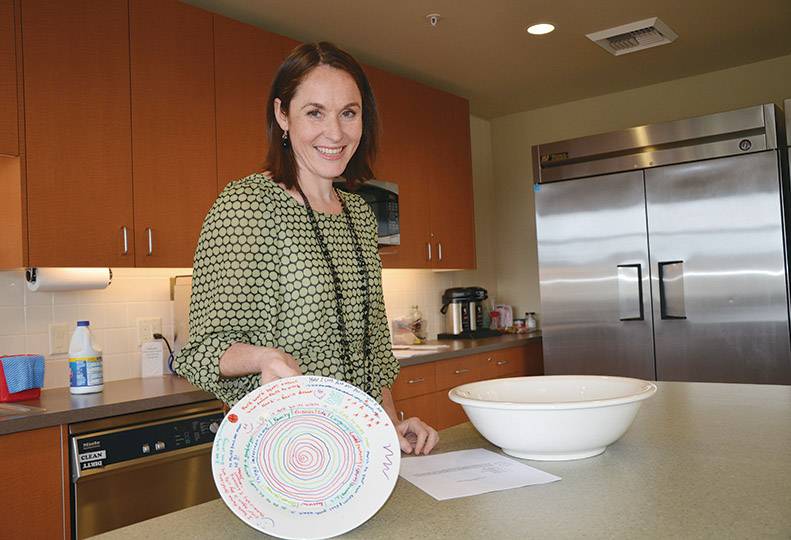 The Emily Program, a Minnesota-based treatment center for eating disorders with a facility in Seattle, opened a facility on Spokane’s South Hill last June and is using psychological, nutritional, medical, and psychiatric interventions to help patients overcome the disorders.

Eating disorders have the highest mortality rate of any psychiatric disorders, claims Krista Crotty, Spokane-based clinical manager and therapist at the Emily Program. Specifically, anorexia nervosa has a higher mortality rate than any other cause of death among females between the ages of 15 and 24, she says.

“Eating disorders are second only to opiate addiction in terms of mortality,” says Crotty. “And only roughly 10 to 13 percent actually get treatment for eating disorders. More than 10 percent of those with anorexia die from the disease.”

Located at 2020 E. 29th in Spokane, the facility occupies more than 7,000 square feet on the second floor of a building there. The space includes offices for administrators, therapists, and dieticians, and roomy, comfortable areas for family and support groups, as well as a modern kitchen equipped with everything needed to prepare meals and model normal eating behaviors.

Crotty, who has a doctorate degree in clinical psychology and is also a certified eating disorder specialist, says the Emily Program employs 22 people, including four dieticians, 10 therapists, two part-time medical doctors, as well as nurses and administrators. The staff treats both adolescents and adults—and both men and women—with eating disorders in a team environment.

An eating disorder is an illness that causes serious disturbances to a person’s diet, such as eating extremely small amounts of food or severely overeating, says the National Institute for Mental Health (NIMH), based in Bethesda, Md. Eating disorders, such as anorexia nervosa, bulimia nervosa, and binge-eating disorder are psychiatric disorders in which the patient is obsessed with food, weight, and body image. Anorexia nervosa is diagnosed when the patient is at least 15 percent underweight and refuses to gain weight, either by not eating enough food, over-exercising, vomiting, or using  laxatives, which can lead to severe starvation and weakening of the heart muscles, causing cardiac arrhythmias.

In contrast, patients with bulimia nervosa aren’t necessarily underweight, but engage in binge eating followed by purging either by vomiting or by using laxatives. This can lead to severe dehydration and gastrointestinal problems. Severe eating disorders can lead to inpatient hospitalizations, says the institute.

Psychologist Dirk Miller originally started the Emily Program, which is named after his sister Emily who recovered from an eating disorder, as a hospital-based eating disorder program in Minnesota in 1993. A Seattle office has been open since 2011, and a program in Olympia will open this August.

Crotty says more than 230,000 people in Washington state suffer from an eating disorder, according to a study by the National Association of Anorexia Nervosa and Associated Disorders in 2011. Young women are most at risk for developing eating disorders, she says, and most have an onset before the age of 20.

“We are seeing kids younger and younger who are dieting or who are anxious about their body image. We see kids around 10 to 12 that are able to verbalize their fear of gaining weight,” she says. “In this culture, there’s so much talk about sugar, gluten, and everything else centered around food.”

Patients come to the clinic either directly or are referred by family doctors, other health care professionals, or even by school counselors, Crotty says. After an initial assessment at the Spokane facility, patients are assigned to a treatment team depending on an individual’s needs, but typically, they are seen by a medical doctor, a therapist, a dietician, and a psychiatrist.

“It depends on the person and the level of care,” Crotty says. “But they are assigned a team.”

In addition to psychological, nutritional, medical, and psychiatric treatment elements, she says, other options include chemical dependency services, trauma recovery, yoga, massage, acupuncture, and creative therapies, such as art therapy.

“There could also be an exercise specialist involved,” she says. “And often schools are involved because a student will need to keep up with school work while they’re attending sessions at the center.”

Spokane’s Emily Program has several treatment options including outpatient services, which can include different levels of therapy and psychiatric services. It also offers an intensive outpatient program consisting of a 3- or 4-day-a-week program, including meals and individualized nutritional interventions. Or patients are offered a partial hospitalization, 5-day-a-week, 7-plus-hours-per-day option, which may include therapeutic meals, medical monitoring, supportive therapy groups, and more, depending on the individual.

The typical onset for bulimia and anorexia nervosa is at some point during the late teenage years or early adulthood says the NIMH. Eating disorders may begin in the wake of a traumatic event or stressful period of life. When individuals feel that events in life are beyond their control, they sometimes turn to eating disorders as a way to acquire a false sense of control over their lives, experts say.

The problem can even start with the intention of losing a few pounds and get to the point where all people think about is food, and it becomes all consuming, Crotty says.

Dr. Ponrat Pakpreo, a Spokane pediatrician who contracts with the Emily Program to provide medical services to adolescent patients twice a week, says evidence suggests a genetic predisposition to the disease.

“There have been genetic studies (and ongoing studies) on whether the components are nature or nurture because it tends to run in families,” Pakpreo says. “But it’s hard to tease out the differences.”

She says some of the risk factors for students with the disorders include poor coping skills, an over-dependence on looks, a judgmental attitude toward self, and a child may have ineffective communication skills—even with parents.

“It can happen to anyone, even as early as age 6 … problems with body image can start if kids are self-conscious about their weight,” Pakpreo says.

“Our culture places such an overemphasis on appearance. It seems like every magazine you look at people see super skinny models, very cut abdomens, and the emphasis is on how you look. Teens naturally compare themselves to the magazines and judge themselves compared to each other,” she says.

Pakpreo says while some parents discover problems after only a few weeks, others may go on for a year or years without anyone realizing what is happening.

“It’s easier to detect when someone is not eating. And bulimics tend to be more normal weighted. Often moms find out when they clean the toilet and find vomit, or parents just start putting the dots together. It’s easier to recognize when a child is losing weight,” she says. “When the onset is in adolescence, it’s such a crazy busy time for most people that often symptoms are missed.”

Initial response to the disease is different for each individual, she says. Sometimes a school nurse or a teacher will notice what is going on and alert a parent, and sometimes the child realizes that they’re having a problem and goes to a parent. Still, she says, often the first point of contact is the family doctor, who may or may not be well versed in eating disorders.

Pakpreo monitors patients, moderates care, and works together with other team members. She checks vital signs like blood pressure, and whether a patient is making progress with weight gain. Sometimes she checks electrolytes and may have to do an electrocardiogram to check heart function.

If a patient has to be hospitalized, Pakpreo says she has an eating disorder protocol to stabilize them.

“Before the Emily program, I didn’t have that many in the hospital, but now some patients coming in are pretty acute,” she says. “Any time you have a program that raises awareness, you get more patients that are urgent. But we try very hard to keep them out of the hospital.”

Pakpreo also says the team approach used by the Emily Program can be critical.

“Using a team approach is so helpful,” she says. “It’s more than just a dietician, a therapist, a doctor can do on their own; we have to work together as a team to support someone on this journey to get back to health.

Crotty says parents ask her all the time about preventive measures, and she tells them that parents who love their own bodies is the best prevention. “If mom can look in the mirror and say my body is OK, my body is healthy and dads, the same thing ... children internalize that. What is preventive starts with parents accepting their own bodies and saying my body is amazing or … my body is at least good enough—as opposed to self-criticism.”

Also playing a role are the media and images people see constantly. “People don’t realize that most images are photo shopped and those bodies are unattainable,” she says.

Weight and your body-mass index are not the end-all, be-all, Crotty says.

“It helps to recognize the symptoms early, getting treatment as early as possible. Realizing that it’s a journey and that it didn’t start in a day and it won’t get fixed in a day,” she says.

She says she see patients making a significant change when they start getting mad at the eating disorder.

“They get angry when they are tired of it, because it has taken away their family life, it’s taken sports and … all they think about all the time is food,” she says.

Crotty says recovery depends on how early the person gets into treatment, an individual’s background, and other variables. “Some people recover in one year or 18 months or it can take years to recover … recovery is vast and varied,” she says. “Still though, they can regain the ability to enjoy life again.”