Local data is elusive, but indicators suggest fewer are discouraged 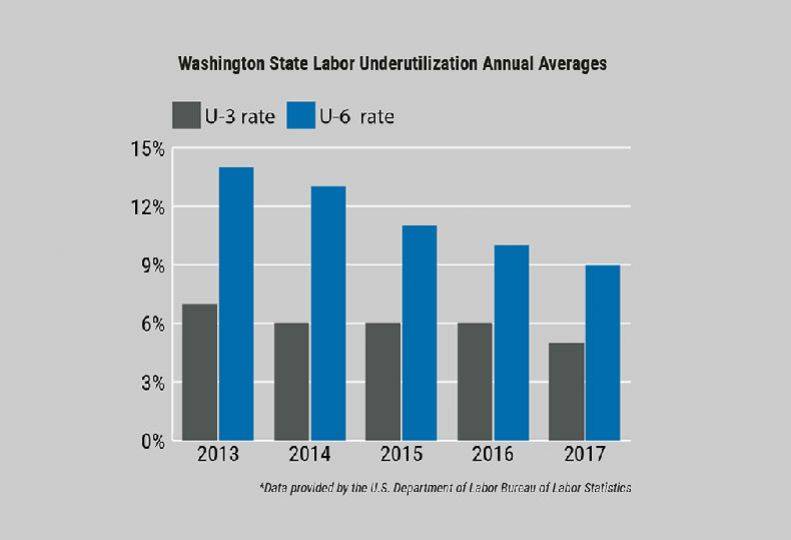 As unemployment rates have dropped in recent years, the underutilized workforce appears to have declined with it, Spokane-area labor experts say.

At the county level, however, it’s hard to say conclusively.

The Washington state Employment Security Department’s website lists the most recent county unemployment rate at 6.3%, nearly twice the national average of 3.8% for the same month, and higher than the state’s February unemployment rate of 4.5%.

But the official measure of unemployment rates doesn’t include everyone who is out of work.

The official unemployment rate is a measure called U-3, which includes all jobless people who are able to accept a job and who have actively sought work in the past four weeks.

An alternative measure, called U-6, adds to that definition the underemployed, or those who are employed part time but want to be employed full time, and discouraged workers, those who haven’t sought work in the past four weeks.

The February U-6 rate for the U.S. was 7.7%, while Washington’s U-6 was 8.4%. Unemployment rates are calculated by the U.S. Department of Labor’s Bureau of Labor Statistics, which does not conduct surveys at the local level.

Doug Tweedy, Spokane-based regional economist for the Washington state Employment Security Department, says state U-6 data is calculated by combining data that state collects with data from the Bureau of Labor Statistics. He says the state collects data on payroll, employment, and people on unemployment insurance, and adds those numbers to the Bureau of Labor Statistics household survey of unemployed people, which doesn’t include those on unemployment insurance.

Local U-6 data would be difficult to obtain, Tweedy says, partly because unemployed people aren’t always easy to access.

“We don’t have any hard data, but it is assumed that during a good economy, there’s less underemployment because those people are moving up into the new jobs, and that’s happening statewide,” Tweedy says.

He says some local information is available that can inform rough ideas of the area’s underutilized workers who are underemployed.

“You can look at poverty rates for the county and figure out that you’ve got people who are likely underemployed who are living in poverty,” Mattke says.

However, because it isn’t possible to say how many of those in poverty are underemployed, poverty rates are not a very closely correlated proxy rate to underemployment, Mattke says.

Mattke says the labor force participation rate can provide clues as to the number of discouraged workers in the county. According to the Employment Security Department, Spokane County’s February labor force was 254,200 people. With a total population in Spokane County of 506,200 people, the labor-force participation rate is about 50%. The national labor force for February, according to the Bureau of Labor Statistics data, was 63.2%.

“Our (labor-force participation) rate is lower than state and national averages, and that means more people are not engaged in the labor market,” Mattke says. “That could point to those workers being discouraged and therefore not taking part in the labor market.”

Grant Forsyth, chief economist at Avista Corp., says he believes that the total number of long-term unemployed people in the area is likely quite low.

“From talking to people in both Idaho and in Washington, the available pool of workers is pretty low,” Forsyth says. “My guess, at this point, is that we probably have very few discouraged workers out there, and if we do, it’s probably connected to a big mismatch between what employers want in terms of skills and what (discouraged workers) have to offer.”

“Jobs across the board now require higher levels of technological proficiency,” Mattke says. “For almost any job, you have to be able to use a computer or an information system. We’re trying to help everybody become much more digitally literate and more familiar with the use of technology in different forms.”

Taking the time to learn new skills, however, can be difficult for underemployed workers who can’t afford the time or money required for education, Mattke says.

“If you’re trying to feed your family and pay the bills, it’s very hard to step away from your job and go to school and take some classes that are going to lead you to a higher skill set that can then get you connected to a better job in a different career path,” he says. “People get stuck in a job or a couple of jobs when they’re underemployed, and they just don’t have the bandwidth to take classes, and they don’t have the financial wherewithal either to go back to school.”

Those workers who have complicated schedules and have therefore been attracted to the gig economy may also find themselves “stuck,” Mattke says.

“They like the flexibility that’s accorded with working in that contingent labor force, so they can pick and choose when they can work,” he says. “They’re not able to move away from that contingent workforce into the full-time workforce, because they just don’t have the capabilities in their life to step away from that to get the skills needed to be successful and get a different job.”

“For them to get back into the workforce, they’d have to do some kind of skill refresh, figure out what it is they need to do to get their skills up to date, and then find employment,” Mattke explains. “That can be a big stretch, especially if you’re an older worker, one who doesn’t have the technology skills that are required for many of today’s jobs. There’s somewhat of a bias against older workers. Employers may be reluctant to hire someone who requires some additional training in order to get their skills up to speed.”

Mattke says there’s also a subset of the discouraged worker population that the Spokane Area Workforce Development Council calls “opportunity youths,” people ages 16 to 24 who are neither in school nor working. He estimates there are some 5,040 young people in Spokane County who fall into this category. Many of them dropped out of high school, he says, and lack the education and skills to find a job. Others may simply not know what employment opportunities are available to them. Some, he says, give up on finding work because so many employers are reluctant to hire young workers who have no experience.

“They could be in the labor force, but they’re on the sidelines,” he says. “A lot of our efforts at the Workforce Council are to serve those opportunity youth, to do outreach, to bring them in to get them some services that can connect them to receive their high school equivalency and then go on to post-secondary education or on to the labor market.”

For both underemployed and discouraged workers, Tweedy says there is some good news: New jobs are being created, and baby boomers are vacating their positions as they retire.

“When you add those together, there’s a lot of openings for people to move up into,” Tweedy says.

“As older workers retire … there’s not many new workers in some of these pipelines, and that’s tightening the labor market as well,” Forsyth says

Filling those pipelines, Mattke says, is a major part of the Spokane Area Workforce Development Council’s work. He says the organization works directly with employers in the area to determine what jobs and skills are most needed.

“We take that information, and we work with our network of educational partners and the different post-secondary institutions to ensure that the programs that they’re delivering are in line with the economic needs of the region,” Mattke says. “We really can’t afford to be having people sitting on the sidelines and wasting that untapped potential.”