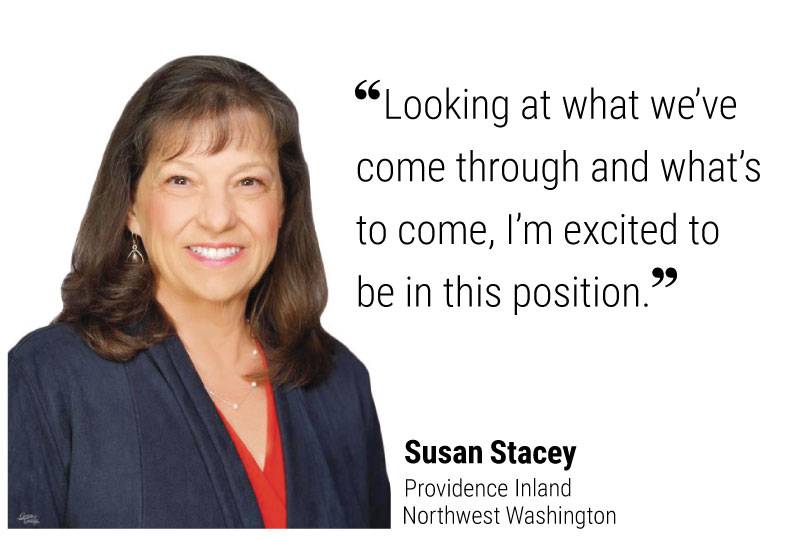 Coming out of a pandemic that has put unprecedented strains on an already stressed health care system will provide plenty of difficulties to surmount. But where some might see those challenges as obstacles, Susan Stacey says she sees them as opportunities.

“With any crisis, you have the opportunity to build something better,” says Stacey, the new chief executive for Providence Inland Northwest Washington. “Looking at what we’ve come through and what’s to come, I’m excited to be in this position, not only being part of the recovery but moving beyond recovery to be intentional in building a better health care community than we’ve had before.”

Stacey officially stepped into the chief executive role on Feb. 1, succeeding longtime Providence executive Peg Currie, who retired. She brings to the job more than 35 years of experience in health care, including her most recent post as chief operating officer and chief nursing officer for Providence Sacred Heart Medical Center & Children’s Hospital. She says she also brings a passion for tackling challenges.

Stacey says she believes the most immediate challenge at Providence is ensuring the safety of caregivers and patients during the latest spike in COVID-19 cases. Part of that effort involves listening to caregivers and taking steps to support their mental and emotional health in meaningful ways. For example, various departments at Sacred Heart have serenity rooms for staff, and Stacey is looking at additional resources that will be similarly simple to access.

“The most important thing right now is helping our caregivers recover, and that involves helping them rediscover what brought them into health care in the first place,” she says. “My goal is to strengthen the teams that are already in place, because the magic happens on the floors of those departments. That’s where people connect to purpose.”

The next priority will be to put together a strategic plan for recruitment and workforce development to help address one of health care’s biggest crises—the workforce shortage. That shortage touches every aspect of the health care system, but as one stark example, she says Washington state alone currently has 6,000 unfilled nursing positions.

Part of what’s driving that nursing shortage is the long-foreseen baby boomer retirements, which in many cases were hastened by the pandemic, she says. Additional factors include more work opportunities for nurses outside of hospitals, and a younger generation that desires better work-life balance.

Developing innovative workforce initiatives is another of Stacey’s passions.

Her past work at Providence has included helping to create an “earn while you learn” program for nursing assistants, as well as relaunching a nurse tech program.

She also maintains strong connections with local nursing schools, which are seeking ways to open up additional slots and to leverage technology to train nurses remotely.

Additionally, as a board member of the Washington State Hospital Association, she has taken an active role in advocating for funding and policy changes at the state level.

“I enjoy understanding and being part of that policymaking and having a voice in connecting those policies to the real lives of various constituents,” Stacey says.

She says her interest in public policy stems from her view of health care as an interconnected network that extends far outside the hospital.

“Health care is an ecosystem, and like any ecosystem, if one element is having problems, the rest will suffer,” she says. “I see spider web connections everywhere, and the past two years have exposed both the fragility and the strength in those connections and systems.”

In keeping with that viewpoint, her third priority will be getting to know others in the community who share a similar mindset and commitment in areas such as inclusion, diversity, and economic development.

She says those partnerships across the continuum of care will be especially vital given the size of the referral area Providence Inland Northwest serves.

“We want to help people be healthy as opposed to just not being sick, and we need to look at how we’re going to get upstream of these issues so that the hospital is not the focus of care,” Stacey says.

A crucial piece of that effort will involve addressing the underlying behavioral health climate in the community amid a growing mental health crisis, she says. Another key will be looking at new models that make use of technology, such as telemedicine, to lower the cost of care for patients.

“We can’t keep doing the same old things and expect different outcomes,” she says. “We’re looking at how we meet community needs in nontraditional ways that can be more efficient.”

These are just a few of what she has identified as the most pressing issues, but Stacey, who grew up on a farm outside Colfax, Washington, says she comes from a long line of women who enjoy taking on challenges.

Her father was a farmer, while her mother stayed at home with Stacey and her sister.

After Stacey’s father died, her mother, who had no prior experience in politics, decided she wanted to run for mayor and was elected the first female mayor of the small town 60 miles south of Spokane. Stacey also credits her grandmother, who owned her own insurance company, as her lifelong inspiration.

“My grandmother was one of the strongest and most compassionate people I’ve ever known,” she says. “She taught me the importance of following through with actions, not just words.”

That desire to help people in tangible ways eventually led Stacey into nursing. After leaving the family farm to attend Washington State University, she initially enrolled in pharmacy school. She quickly realized she hated chemistry and needed more interpersonal interaction, so she changed her major to nursing, with a minor in child development.

She started out as a registered nurse in the pediatric intensive care unit at Sacred Heart. She says she enjoyed the challenge of critical care nursing and frequently volunteered to go down to the ER when they were short-staffed. Over time, she realized she also had a passion for leading people.

“I like to do things that have meaning and to go where the need is, not just what’s easy,” she says. “Leading people was something that energized me.”

She served as pediatric ICU nurse manager for more than 20 years, during which she earned an MBA in health care management and helped start the children’s hospital at Sacred Heart.

She then served a brief time as director of the orthopedic service line before becoming executive director of the children’s Hospital and women’s services, the position she held before her most recent role as chief operating officer and chief nursing officer.

She points to her predecessor Peg Currie and recently retired Providence regional chief executive Elaine Couture as key mentors and says her background in nursing, which she calls a “team sport,” indelibly shaped how she views both leadership and patient care.

“Being with someone when they’re facing something they don’t want (to face) is an enormous privilege, and I’m in awe of that work,” she says.

“As a nurse, I fundamentally have patients at the center of decisions I make, and that includes advocating for patient needs beyond illnesses and looking at how we navigate complex systems on behalf of the communities we serve,” she adds.

To that end, Stacey serves on the boards of several local community and business organizations, including Partners with Families & Children.

“Our care for our community is reflected in how we care for women and children,” she says.

As a mother, Stacey says she relates to the challenges many women face in trying to balance work and family.

She says one of her greatest leadership lessons came early in her career, when she was trying to navigate increasing demands at work while also being mom to three young children, including one with significant developmental disabilities. She reached a breaking point, where she considered leaving leadership entirely.

“I was working way too many hours, not working as smart as I needed to, and had the hero-martyr complex that’s common in so many new leaders,” she says. “My family was suffering, and I realized the work was not going to change (but) I needed to change.”

She put things in place to protect herself and her priorities, and she says those practices have sustained her to this day. She spends time alone in quiet reflection every morning and tries to reserve her weekends for family time. She also likes to “play tourist” by exploring small towns in the region and visiting local attractions such as the Northwest Museum of Arts & Culture, in Spokane.

Stacey says she enjoys those types of experiences because they bring fresh perspectives that only can be gained by viewing a place from inside of it.

“If I don’t create the space for me, I lose a part of who I am,” she says. “I had to learn to give myself permission to unplug and take care of myself and my family. Learning that life balance is the reason I am where I am today.”

While she says the joy she derives from her family is what ultimately grounds her as a person, Providence’s mission of caring for the poor and vulnerable is what has kept her in health care.

“We see people in the hospital on some of their best days, but far more often during the most difficult times in their lives,” she says. “No matter how bad of a day I’m having, I know there are people here in these beds who are having a worse day, and my job is to ease their way.”