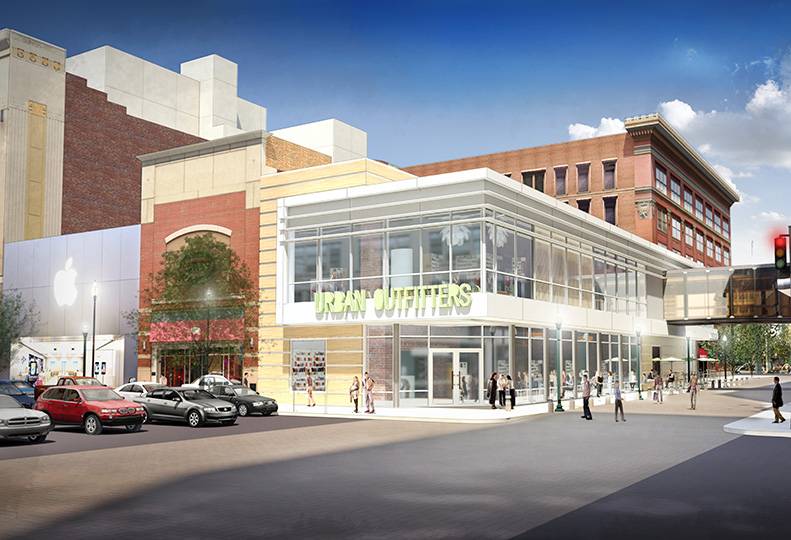 -ALSC Architects
A $2 million demolition and remodel at the old Saad Building site, at 221 N. Wall, is expected to get underway soon.

River Park Square CEO Bryn West said this afternoon that Philadelphia-based national retailer Urban Outfitters plans to open a store next fall in the Saad Building, at 211 N. Wall, at the east end of the mall complex, after a $2 million demolition and rebuild of the building.

“It’s a huge opportunity for Spokane to land a major retailer like this,” West says. “ … This will really allow us to reach a different demographic than we usually serve.”

River Park Square plans to demolish the existing building at the corner space, which is located between the Apple Store and Macy’s, this summer and to rebuild with a slightly larger footprint, West says. The new two-story building we have about 10,000 square feet of space, she says.

“We submitted the application for the street relocation,” she says. “The plan … is to take about 10 feet of sidewalk and 7 feet into the street.”

ALSC Architects, of Spokane, is the designer for the project, West says. Centennial Properties, the real estate division of the Cowles Co., is the project developer.

“This will be the first Urban Outfitters in Eastern Washington; I think the closest ones are either in Boise (Idaho) or Bellevue (Wash.),” West says. “So it’s pretty exciting.”

Also upcoming for the downtown mall is a new pizza restaurant in the food court, currently under construction, that’s to be called Holeshot Pizza and Brew. The pizza restaurant is taking the old Pizza Oven space, to the left of Panda Express. It’ll also be operating an adjacent beer and wine bar called The First Turn, in the former Arbor Crest Winery space.