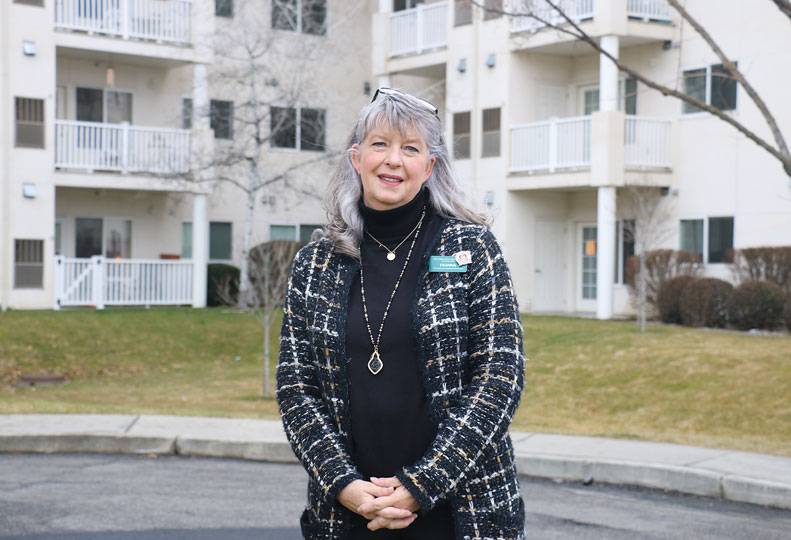 COVID-19 vaccines are being administered throughout retirement communities here, and administrators say the process is going smoothly.

According to U.S. Centers for Disease Control and Prevention data, more than 63,000 doses of the vaccine had been administered in long-term care facilities in Washington as of Feb. 1.

“To them, I don’t think it felt any different than the flu shot clinic we do every year,” Carter says. “We partnered with Walgreens to do our vaccine clinic, because we usually partner with them every year to do our flu-vaccine clinics.”

“We’re grateful for the opportunity and coordination that made this seamless for our residents,” Carter says. “The wait time in line was minimal, and paperwork was ready and completed prior to arriving at our clinic.”

Carter says that without the coordinated efforts of the pharmacies, CDC, and retirement facilities, organizing vaccinations for residents and staff would have been an impossible task. Arranging for transportation alone would have been difficult, she says.

“Many of our residents do not drive, may not have local family available to transport and spend the entire day to do this with them, and many would struggle with completing the paperwork needed,” Carter says.

Neither facilities nor residents and staff have to pay directly for services under the Pharmacy Partnership for Long-Term Care Program.

“All vaccines are covered in some fashion, whether it’s with their private health care insurance, or with a federally-funded program,” Carter says.

According to nonprofit health information provider Kaiser Family Foundation, most Medicaid plans and the Veterans Health Administration provide federally purchased COVID-19 vaccines for free to those who don’t have private insurance.

Mike Drew, president and CEO of Spokane-based Riverview Retirement Community, says he was impressed by the speed at which both CVS and Walgreens processed vaccinations at the facility’s Jan. 15 clinic. In about six hours, 384 people received their first dose of the vaccine, including most of the facility’s roughly 350 memory care, assisted-living, and independent-living residents and some of its 200 staff members.

“It’s really quite a show,” Drew says. “They pump people through just as fast as they can. The logistics were challenging, so we had extra staff come in to help.”

Carter says that unlike the annual flu vaccination, scheduling the COVID-19 vaccine — which must be administered in two doses about three weeks apart — could have posed some challenges, but the facility’s pharmacy partners handled scheduling in addition to the other services provided through the Pharmacy Partnership for Long-Term Care Program. Orchard Crest is scheduled for another vaccine clinic in early February, and a third clinic — for those who received their first dose at the second clinic — in late February.

Drew says that establishing partnerships with pharmacies now means that should some sort of future disease outbreak require mass vaccinations, long-term care facilities such as Riverview will be better prepared.

“We now have very good contacts in both of those pharmacies,” he says. “As a result, we would probably use that same communication line if something like this were to happen again.”

At Riverview, Drew says some residents and staff have been hesitant to receive their first dose and chose to opt out of Riverview’s first vaccine clinic.

“Those residents and employees said (they) just want to see how it goes,” Drew says.

Drew says Riverview later announced to residents and staff that of those vaccinated at the first clinic, none experienced a significant reaction to the vaccine.

“I think that was helpful, because there’s some misinformation about the vaccines,” Drew says.

Carter says that since the beginning of the pandemic, nine people at Orchard Crest have tested positive for COVID-19.

“The very first positive case we had was because of (a resident) going home with family at a holiday,” Carter says. Other cases have been traced to caregivers from organizations outside of Orchard Crest, she says.

Though Orchard Crest has endeavored to preserve as much normalcy as possible for residents, the social isolation they’ve faced has been difficult for them, Carter says.

“The biggest struggle is that they want to see their family again, so they see this as an avenue for getting one step closer to having the ability to do those things,” she says.

Drew says many Riverview residents have been pleased by the opportunity to socialize with one another before and after receiving their vaccine. As is the case with most vaccines, those who receive the COVID-19 vaccine must be observed for 15 minutes after receiving a dose in case they experience an allergic reaction or other complications.

Carter says Orchard Crest has used the availability of the vaccine at its facility in marketing. For several weeks, Orchard Crest’s website displayed an ad stating that anyone who moved in by Feb. 1 was entitled to free COVID-19 vaccinations. Carter says it’s a move to help fill vacancies, which have increased at Orchard Crest as some residents have moved out and fewer people move in.

“We wanted to ensure that those who are concerned, who want to sell their home, who want to be in retirement living, know that now is a safe time to do that,” Carter says. “If they move in by a certain date, we have the ability to include them in this first round, instead of having to go out and arrange it through one of the mass vaccinations sites, which has been a challenge for some.”