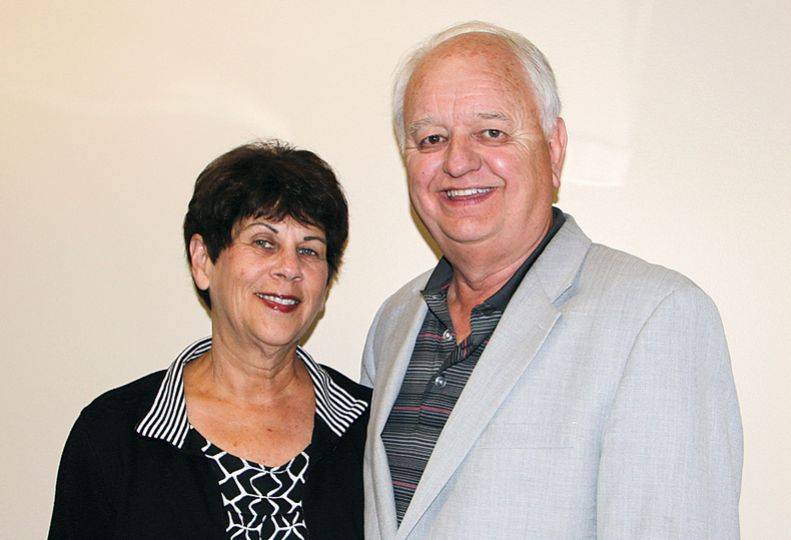 -—Virginia Thomas
Adrienne and Wes Teterud founded Widows Might 20 years ago. The nonprofit is managed by an 11-person board and is staffed by volunteers.

Twenty years ago, Wes Teterud and his wife, Adrienne, started Widows Might in the basement of a local church, with the goal of the Spokane Valley nonprofit to provide guidance and resources on practical matters for widows who might not have support from family or faith organizations.

“We’re embracing the cause of widows by engaging with their issues of widowhood,” says Wes Teterud, who has been president of the organization since its founding.

The group’s name refers to the Bible story of the widow’s mite in which a widow gives two small coins, called mites, to the temple. Teterud says he chose the word “might,” however, to represent the empowerment of widows.

In all, just over 16,400 widows live in Spokane County, he says, citing statistics from demographics database Demographics Now. Teterud says 2011 U.S. Census Bureau data shows the median age of a widow to be 59.4 years.

“That’s kind of a thing that I think people need to get out of their mind, that it’s not a geriatric issue,” Teterud says.

The organization holds several educational luncheons throughout the year at CenterPlace Regional Event Center, at 2426 N. Discovery Place in Spokane Valley. Teterud estimates between 100 and 125 widows attend each luncheon. The events provide healthy food, social contact with other widows, and talks from local experts.

“We had an auto mechanic come one time to speak about how not to get ripped off when you go to buy a car or have a car repaired, because women are vulnerable when they’re alone and they don’t have the husband to advocate for them,” he says.

Widows Might is run by an 11-person board of trustees, one of whom is Adrienne Teterud, and is staffed entirely by volunteers. The organization doesn’t have an office space; Teterud says most operations are conducted online or at the CenterPlace Regional Event Center. He says people can get in touch by visiting the organization’s website, widowsmightspokane.com. Widows Might relies solely upon donations and grants, which are used to fund luncheons or are placed in the organization’s Widow’s Fund, Teterud says.

“Probably the greatest need for a lot of the widows we work with is financial, because they lose at least 40 to 60 percent of their income and lifestyle when the husband dies,” Wes Teterud says. “If the husband hasn’t planned with life insurance or investments and that sort of thing, that puts her in a real bind, because then she’s relying on Social Security. She only gets her husband’s Social Security, or hers, whichever is greater. She doesn’t get both. And a lot of widows don’t realize that until it’s too late.”

“A lot of them don’t have a clue,” Teterud says. “Their husband’s been doing all of the bookkeeping and all the money stuff.”

Teterud says the organization restricts membership to widows because “statistically, they don’t remarry, and widowers do.” Widows tend to live in a state of widowhood for 20 to 30 years, Teterud says, meaning they may live independently for decades after the death of a spouse.

Helping widows to navigate their financial situation is part of Widows Might’s mission. Teterud says many couples don’t fully understand the amount of planning necessary to ensure a surviving spouse isn’t left penniless after the death of the other spouse.

“From a preparation standpoint, people who have a pension, like schoolteachers, government workers, things like that, when they get ready to retire, they have two options to take their pension,” Teterud says. “They have a single life, which is more money. Or they can take a joint life, which means when they die, the widow would get, say 75 percent of that. If he takes a single life and dies, she gets nothing, no income. When the husband gets ready to retire, the husband and wife, in preparation for widowhood, they kind of need to figure that out.”

Widows often worry about how to stretch their finances so that they don’t outlive their income and savings. Teterud says he recommends placing some investments in a guaranteed life annuity.

“It’s like a pension, they’ll never run out of it,” he says. “That decision can be made even after they’re widowed, because sometimes they do have a chunk of money that they got through investments or life insurance or whatever, and the challenge is: How are they going to hang onto it?”

Teterud says medical insurance can be a concern for widows who were on their husband’s plan. Widows who can’t afford to buy their own insurance and who are too young for Medicare are often forced to take advantage of the Consolidated Omnibus Budget Reconciliation Act or to apply for Medicaid.

Planning for long-term care also is important for widows, Teterud says, especially as the average cost of long-term care in Spokane County can be over $100,000 per year.

“Typically, the husband dies and the wife is the one who’s left. If you go into a nursing home, it’s more women than guys because women outlive their husband usually by about seven years,” he says. “With that in mind, a lot of times they need to start looking at some kind of long-term care coverage, either insurance like what I sell, or have enough assets. If they don’t, they have to spend down to poverty.”

Teterud says widows who are too young to retire often have trouble finding employment. He gives the example of a 53-year-old widow the organization works with who had been a stay-at-home mom for 20 years when her husband died.

“We call them a displaced homemaker, which means she’s too old to get back into the marketplace, because she’s been out of it for so long … but she’s too young for Social Security benefits because she won’t qualify for Social Security until age 60,” Teterud says. “So we help them with trying to find employment. We try to network them with employment services, social services, that sort of thing.”

Widows Might also connects widows with community assistance organizations, such as Spokane Neighborhood Action Partners for help with energy assistance, Meals on Wheels for help with food and nutrition, and Aging and Long Term Care of Eastern Washington for a variety of services.

When Widows Might receives a call for aid from a widow or from a widow’s friend or family member, Teterud visits the widow at her home.

“Our process is, Adrienne and I make an appointment and we go do an intake survey with the widow to find out what the need is and how we can address it,” Teterud says. “In the New Testament, in James 1:27, it says pure religion … is to visit the widow and the orphan in their affliction. The word ‘visit’ in the Greek doesn’t mean just a social call. It’s a word used that mayors and kings of domains would send some of their people out from the government into a community, and they would take inventory … to see what needed to be repaired, what the priorities were.”

Teterud says that Widows Might functions on the premise of analyzing and prioritizing a widow’s needs.

“You can’t just come in and have a social visit with a widow and find out what her needs are,” he says. “You’ve got to look around and see.”

During the intake process, Teterud also helps the widow to compile a comprehensive list of assets and debts. Once needs are identified and solutions found, Widows Might connects the widow with necessary services. If payment for a service such as a plumbing repair is needed, Widows Might cuts a check directly to the plumber.

Planning for the future is key to preventing a widow from needing the help of Widows Might or other organizations, Teterud says.

“One of the things they can do, and I’m advising my clients to do this, is that they try to put off Social Security benefits to age 70. Our full retirement age is 66 … but I want to put off my retirement to age 70 because every year, from age 66 to 70, your Social Security benefit grows. That would be one thing I would advise for husbands if they want to provide income for their wives down the road.”

Teterud says spouses should both go through legal documents like wills and pensions to make sure they’re accurate and up to date.

“Check your beneficiary arrangement on your pension because if it’s the ex-wife, that will not bode well when the husband dies,” he says. “That’s probably the No. 1 mistake we see in our business, is wrong beneficiary designations.”

Teterud also recommends that each person compile vital information for their spouse to access in the event of their death.

“I encourage husbands to make a list of their accounts, their important papers, passwords, their contact information for retirement and Social Security, and all that stuff so that the widow knows who to touch base with,” he says. “There’s a lot of those things that husbands, preretirement and during retirement, could do to make it a little easier for their wife.”