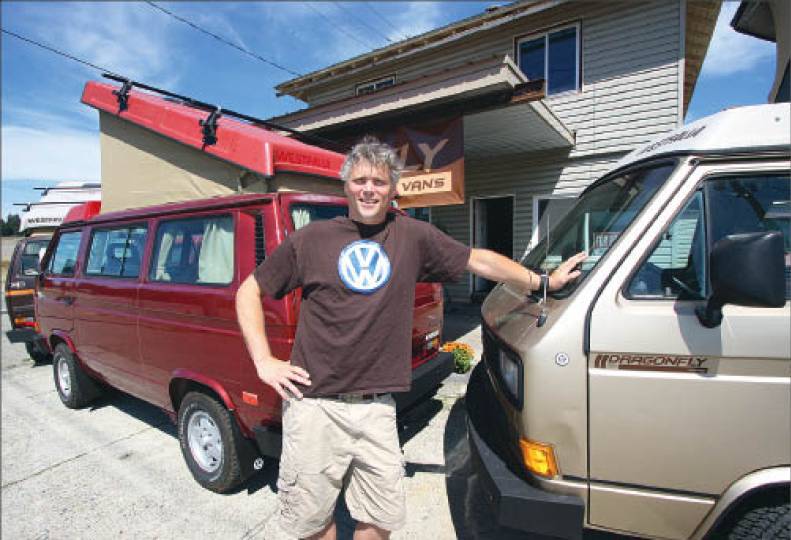 -—Staff photo by Kim Crompton
Scott Quinnett has been driving, restoring, and championing the back-country attributes of Vanagons for 20 years.

Scott Quinnett says his love affair with Volkswagen Vanagons began serendipitously when trouble he was getting into with faster, more powerful vehicles forced him to give them up for something at the other end of the performance spectrum.

The Cheney native, a surfing enthusiast and former professional snowboarder, says he barely had purchased one of the classic German-built vans 20 years ago when he "had an epiphany" about how ideally suited they were for enjoying outdoor pursuits.

"The drive home from the dealer that was it," he says.

Quinnett has been driving, repairing, restoring, and championing the back-country adventure-seeking attributes of Vanagons ever since. He now owns Dragonflyvans LLC, of Coeur d'Alene, which has a fleet of 10 refurbished Vanagon campers that it rents out to fly fisherfolk, kayakers, hikers, and other outdoor enthusiasts.

He opened the business two months ago on leased property at the northwest corner of Huetter Road and Seltice Way, about midway between downtown Coeur d'Alene and Post Falls, and says rentals have been building slowly as he explores ways to make people aware of his new enterprise there.

He initially sought to rent the vans for prices ranging from $225 a day to $2,000 for 10 days, but says he has cut those prices in half for now to stimulate rentals, partly in response to the impact the recession is having on vacation and recreational spending.

"I think it's just a matter of time," he says, "and the vans are set up really nice."

Vanagons are rear-engine, rear-wheel-drive or all-wheel-drive vans, offered in "weekender" and full camper versions, that Volkswagen no longer produces and stopped exporting to the U.S. in 1991 but that continue to enjoy a loyal following, judging by the myriad Web sites devoted to them.

The Vanagons that Quinnett owns, all 1986 or 1987 models, are what are called Westfalia Wolfsburg Edition Weekenders, lacking things such as the sink, refrigerator, and stove included in the full-camper models, but customized with other special camping-oriented features, including pop-up tops. He says Dragonflyvans, for a small additional charge, will equip the vans with everything from cooking gear, miscellaneous kitchen supplies, high-end stainless steel coolers, and French coffee presses, to sleeping bags, camp tables, folding chairs, and leveling ramps. Other equipment, such as canoe or kayak racks, bicycle racks, trailer hitches, float tube carriers, and even fly rod holders, also are available on request.

Through Dragonfly, you're not just renting the vans, Quinnett asserts. "You're renting 20 years of camping experience. In operation and execution, they're flawless."

Though happy to rent the vans to Spokane-Coeur d'Alene area residents, he says he expects the largest share of his customers to be out-of-town visitors. One of his goals, he says, is to develop good relations with other outdoor-oriented businesses that complement what he does, such as some that arrange and shepherd trips to recreational areas.

"My hope, my goal is to massage these things into group events," Quinnett says.

The property he leased at 3700 Huetter Road also fronts on busy Seltice Way. It includes an older, dilapidated building, with a small office, parts area, and shop, and a modest-sized outside display area for his Vanagons.

He says he would like to relocate to nicer quarters once business picks up enough to warrant such a move. He is operating the business by himself for now, but says he also would like to add an employee or two at some point if increased rental activity justifies it.

"Right now, anything that can generate a buck I'm doing," he says.

That includes formulating plans to restore and sell two or three Vanagons over the winter to tide him over until prime camping season returns and the demand for rental campers strengthens. Quinnett says the VW vans have grown in classic-vehicle stature to the point where they now can command prices upwards of $30,000, depending on model, condition, and features. He says that GoWesty! Camper Products, a prominent Los Osos, Calif. company involved heavily in that niche market and that he worked for several years ago, is driving much of the price escalation and recently sold a fully restored Westfalia four-wheel-drive full-camper model for $124,000.

Quinnett is a mechanic who has done all the restoration work on his own vans himself, but rather than selling them, he says he much prefers the business model of renting Vanagons and helping people discover and create memories with them. Vanagon enthusiasts enjoy sharing their experiences, he says, adding, "They're real love stories. They're all fond memories."

One of the great things about them, he says, is, "You can put them real deep in the woods, which you can't with an RV." From an environmental perspective, they also leave a much smaller "carbon footprint" than bigger rigs, he says.

Quinnett lives with his wife, Rachelle, and 3-year-old son, Tanner, at Beauty Bay on Coeur d'Alene Lake. He is the youngest son of outdoor writer and columnist Paul Quinnett, of Cheney, who is a silent partner in the venture. Paul Quinnett also is a longtime clinical psychologist here and is president and CEO of QPR Institute Inc., of Spokane, which specializes in suicide-prevention training and education.

Scott Quinnett attended the University of Alaska Anchorage and, following somewhat in his father's footsteps, majored in psychology. He then worked at two centers for troubled youth in Spokane for about three years before deciding that career path wasn't for him.

He worked for seven years as a mechanic at an Audi/Volkswagen dealer in Seattle, and left there in 2004 to take a job as parts manager at GoWesty in California, later becoming a customer technical adviser there. He and his wife returned to Seattle in 2006, and he operated Dragonflyvans there as a custom-parts maker and van customizing shop until moving to Spokane about three months ago.

Quinnett says they returned here partly at the suggestion of his father, who thought the wide range of outdoor recreational opportunities here made it a good place to base such a business.

He notes also that both he and his wife have family here, since his parents still live in Cheney and his wife's parents live in Spokane.

Though Dragonflyvan is off to a slow start here, Quinnett remains optimistic and says his main focus with the Vanagons is "to get butts in the seats and people talking about them." He adds, "Once that message gets out, there won't be a problem with renting them."