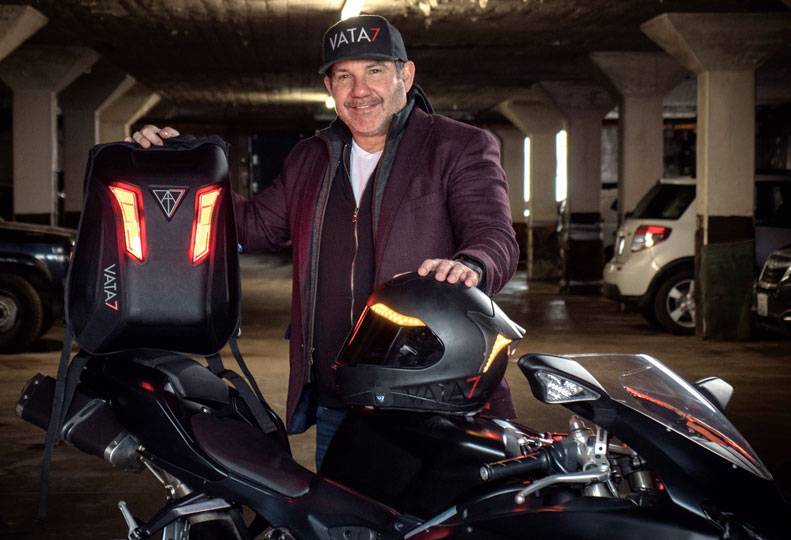 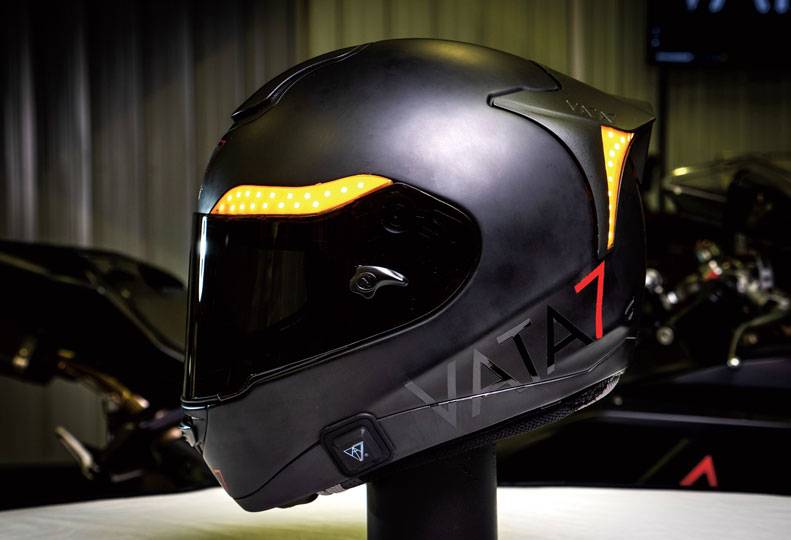 The 55-year-old former Navy frogman is the CEO and founder of VATA7 Inc., a Spokane-based startup that creates motorcycle gear and clothing featuring built-in lighting technology designed to increase rider visibility and safety.

“The data tells us that 73% of all motorcycle fatalities occur at night when riders disappear into the darkness, which is what prompted the creation of VATA7,” Garvey says.

VATA7’s products work by enabling riders to sync their motorcycle’s lighting system, including taillights, brake lights, and turn signals, to the company’s helmet and backpack products by connecting a wireless transmitter called a Tx unit to a wiring harness beneath the motorcycle’s seat.

“We provide clear instruction in our manual with wiring diagrams for the most popular motorcycle brands,” explains Garvey. “Some riders have their shop install the Tx unit when getting their bike serviced.”

Garvey launched VATA7 in 2017, initially operating the company out of his garage in San Diego, where most of its early employees were neighborhood high schoolers he taught to solder, quality test, and ship the company’s first product, the Gen1 backpack.

In addition to the lighting system and a battery, the Gen1 backpack’s softshell form includes 2.3 liters of interior storage space.

“We sold out of our initial production of 300 Gen1 backpacks in just four months, and could barely keep up with demand,” Garvey says. “It was at that point that I decided to move the company to Spokane, where we could use local resources, create jobs, and have room to grow.”

Here, VATA7 employs a team of four people and works with a dozen remote freelancers. Its headquarters, located in a 5,000-square-foot building at 1908 North Old Trails Road, west of Spokane, also includes offices and a product showroom.

Garvey says VATA7 closed a seed-funding round with Washington state investors last summer, raising a total of $350,000. That funding was used to engineer and build working prototypes for the Gen2 tech pack and X7 helmet, build on its intellectual property, add to its team, and construct setups for events such as the annual International Motorcycle Show and the Sturgis Motorcycle Rally.

Being a startup company has been a challenge this past year, with major events like the Spokane Motorcycle Show – which he’d hoped would serve to launch VATA7 products – being canceled due to Gov. Jay Inslee’s COVID-19 restrictions on gatherings.

“We’ve had to be able to pivot quickly,” he says. “It was hard, but we’re thankful we were able to receive a Paycheck Protection Program loan that helped keep employees on through the rest of the year.”

VATA7 currently is in the midst of crowdfunding efforts and hopes to raise between $500,000 and $1 million in its Series A round in February for inventory and marketing, Garvey says.

“We’re starting a test pre-fund campaign this month, then a 30-day campaign in April, followed by shipping Gen2 tech packs in June, and X7 helmets in August,” he says. “Our pre-test showed that we should hit the $1.5 million mark during the 30-day campaign and $2.5 million in the in-demand campaign the next couple months after.”

Garvey describes the Gen2 tech pack as having a streamlined shape similar to the Gen1 model, but with added space for a hydration bag, a solar charging kit, and a USB charging port in the side strap.

“Since Gen1, our technology has increased its working capabilities between the receiver and transmitter from 100 feet to 300 feet and our sync mode is much easier,” he says. “Our wireless receiver is now small enough to fit into any product we have slated to launch, and our Tx unit is the size of a U.S. quarter, so it fits nicely under the motorcycle’s seat.”

Garvey says the company plans to ship smaller items like solar kits, batteries, cell phone cradles, and other accessories from its warehouse, and direct ship Gen2 tech packs and X7 helmets internationally from its factory, which will save on shipping costs.

While VATA7 is fairly new to Spokane, Garvey spent much of his life in and out of the Spokane area. Upon graduating from Mead High School in 1984, he joined the Navy and was part of its elite rescue swimmer, Helicopter Search and Rescue, and Special Operations teams.

He went on to earn an Associate of Applied Science degree at ITT Technical School, in Spokane Valley and started his career in computer-aided drafting with Riley Engineering, in Spokane.

“My interest in lighting led me to take classes online, and eventually I became a lighting designer,” he says.

After his parents died in 2009, Garvey decided to move to San Diego, where he started a tea and juice company. During his time there, he purchased a powerful, lightweight motorcycle called a café racer from Los Angeles-based custom motorcycle maker Dustin Kott, Garvey says. It was on his way home with the bike, that he pulled over to help a family with a flat tire and witnessed a motorcycle accident.

“It didn’t take me long to figure out it was a motorcycle, but since it was night, I couldn’t see the rider for several minutes,” he recalls. “All the way home all I could think about was how invisible I must be to the thousands of cars around me, and the idea for VATA7 was born.”

“It was a name my son and I came up with shortly after building the very first Gen1 backpack prototype,” he says. “VATA7 was something we could own the domain, invent the definition, and own all the social media accounts with.”

The company’s tagline is “Illuminating the Human Machine.”

Garvey and his son Sean initially began experimenting with designs for a motorcycle backpack that would incorporate LED lighting, but they still needed to create a system for wirelessly linking and synchronizing those lights to a motorcycle’s lighting system.

“In early prototypes we basically rewired a garage door opener to act as a four-channel frequency communicating between the backpack and the bike’s tail lights, turn signals, and brake lights,” he says. “Of course, the FCC wouldn’t have let us use that technology, so we had to invent our own wireless receiver and transmitter, which would operate on its own frequency, and easily fit into helmets and bikes.”

There are over 900 trillion automated address, so no two riders should cross communicate,” he says.

Garvey says there isn’t a limit to the amount of VATA7 gear that can sync to just one Tx unit. That means drivers and passengers will be able to sync motorcycle lighting systems with the company’s X7 helmets, Gen1 or Gen2 tech pack, and future products, which could include jackets, boots, gloves, and other gear with the company’s technology.

Riders who have more than one motorcycle can add a Tx unit to those motorcycles, and gear with the receiving technology will sync to the bike they choose to ride.

The transmitter’s electronic circuitry also includes an accelerometer and gyroscope. “When the motorcycle leans more than 30 degrees for more than 10 seconds, our VATA7 gear and mobile app goes into ‘emergency mode’ in which all LEDs flash continuously, and up to four people are notified of your location and that you may be in an accident,” he says.

Looking ahead, he says VATA7 already has several motorcycle helmet companies interested in licensing its technology for their 2022 lines.

Another well-known motorcycle company is interested in putting together a package that would include both the Gen2 tech pack and X7 helmet with the motorcycle’s branding, and factory installation of the wireless transmitter into its new sport bike, he adds.

In addition to its Gen2 tech pack and X7 helmet, VATA7 has four other products planned to launch over the next 36 months, Garvey says.

“We’re still keeping details on the other products close for now, but I believe they all have the potential to be real game changers,” he claims. “The future looks bright from here.”